Newlyweds Bill and Claire Martin (Robin Thomas from Summer School and Starr Andreeff from The Terror Within) have just moved into the home that Bill made himself. Then he finds a dollhouse — modelled after, you guessed it, 112 Ocean Avenue — in the shed. That dollhouse makes him see a vision where his daughter gets burned alive in the fireplace, so of course he gives it to her as a present when he wakes up.

That night — at Jessica’s birthday — her aunt Marla (Lenore Kasdorf, Mrs. Rico from Starship Troopers and man, can I get a deeper reference? Yes, of course I can…) and uncle Tobias arrive and are instantly nervous about the toy house and the figurines that it contains.

Bill also has a troubled son named Todd who has a girlfriend named Dana, played by the doomed Lisa Robin Kelly, who was replaced on That 70’s Show by MADTV’s Christina Moore in the sixth season and would later die hours after checking into a rehab facility. What a shame.

This one has voodoo dolls transforming into dead zombie dads, tarantulas inside pinatas, people shrinking and entering dollhouses, and even the real house itself getting blown up real good.

It’s directed by Steve White, who only directed this movie before going on to produce the TV movie version of Whatever Happened to Baby Jane?, Meet the Applegates, Amityville: It’s About Time, Amityville: A New Generation, Cabin Boy, the astoundingly scummy and wonderful Death of a Cheerleader, The Devil’s Advocate and Halloweentown. It was written by Joshua Michael Stern, who would direct the Jobs movie that starred Ashton Kutcher as Steven Jobs, bringing the That 70’s Show connection full circle, I guess.

That said, most of the actual directing was done by cinematographer Thomas L. Callaway, who also worked on Slumber Party Massacre II, Demon Wind and Vice Academy Part 2.

You may ask how the dollhouse got there, why it looked like the Ocean Avenue house and why it was evil. You will get no answers. Such is life, filled with misery, pain and possessed toys. Look — if you find a dollhouse in your new house that you built, just throw it away while you still can. 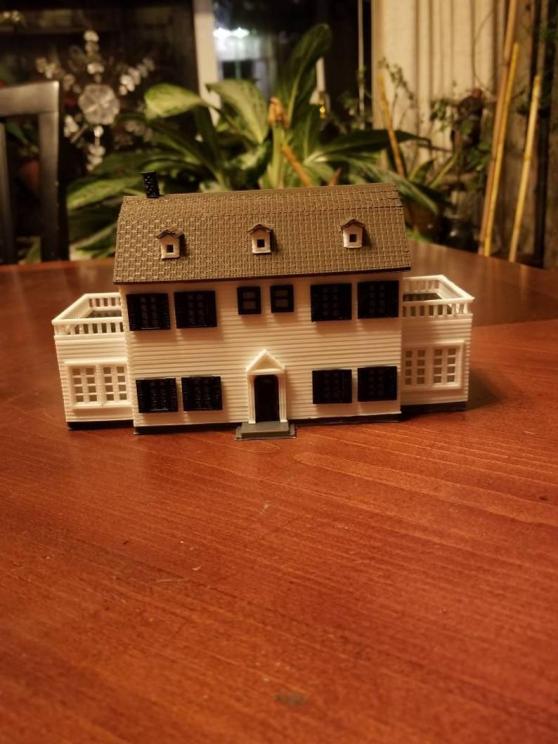 EDIT: I said that and as I was posting this article, I discovered this on Etsy.

You can watch this on Amazon Prime or Tubi. Or, if you want the ultimate non-cannon Amityville experience, you can grab this movie as part of Vinegar Syndrome’s astounding Amityville: The Cursed Collection set, along with Amityville: The Evil Escapes, Amityville: It’s About Time and Amityville: A New Generation.