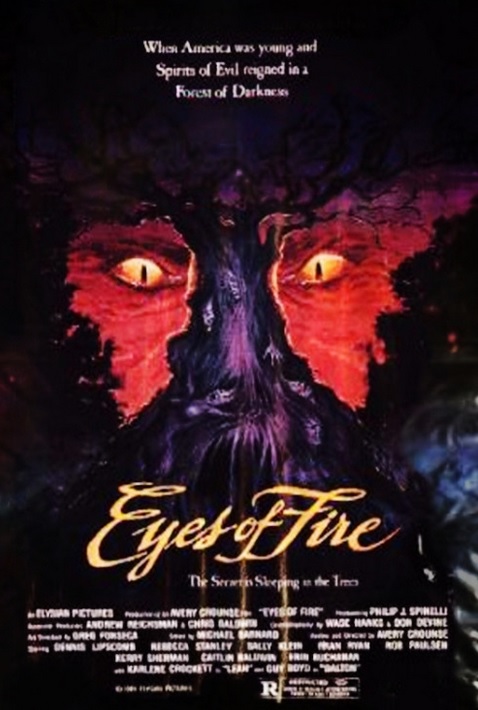 Okay, so this is more demons than Satan. Well, it’s actually evil Native American spirits, but it’s a rare obscurity and that’s what B&S About Movies is all about. So, let’s work this one into our “Satan Week” (well, three weeks, actually) anyway, shall we?

Shot outside of St. Louis, Missouri, for under $3 million and theatrically known as (I think, the better titled) Cry Blue Sky, it was poorly edited, chopped down from its original 108-minute running time to 86-minutes and retitled for its home video and pay cable version (it ran on HBO).

To sum up the plot: If Eyes of Fire were made today, it would be known as Cowboys vs. Demons and programmed alongside the Aslyum-styled mockbuster “Cowboy vs.” knockoffs Cowboys Vs. Vampires (2010; aka Dead West) and Cowboys vs. Zombies (2014).

Oh, but this film is so much better than those films.

I was actually inspired to give Eyes of Fire, the directing debut by Avery Crounse, another watch after picking up (from the public library on a whim) a copy of the supernatural period horror film, The VVitch (2015), the commendable directorial debut of Robert Eggers.

Eyes of Fire tells the story of a wicked, polygamist preacher (is there any other kind) who runs the old west (circa 1750) town of Dalton’s Ferry. When the Reverend Will Smythe (Dennis Lipscomb) is called out for his adultery among his parishioners, he and his flock are subsequently banished. Of course, God tells the Reverend to make a new life in a valley foretold in Indian legends as the “Forest of Darkness,” a wooded area with souls trapped inside trees and running amok with “mud people.”

Before you know it, all hell breaks loose in the Promised Land, Blair Witch-style, as the settlers can’t seem to find their way out of the forest and they’re picked off one by one. It’s up to a rugged frontiersman, Marion Dalton (Guy Boyd), and a crazy, woods-dwelling witch who proclaims herself the “Queen of the Forest” (Karlene Crockett) to battle the marauding Indian spirits.

While Eyes of Fire is low-budget and under the radar, there’s no denying that it’s well made and features great cinematography, costuming and special effects (the tree-trapped spirits are excellent), along with solid acting from the cast of unknowns. Granted, some quarters may say it’s slow: if you watch the home video cut instead of the theatrical cut, it is a bit choppy and doesn’t make a whole lot of sense in places (it loses 22 minutes between its different cuts), but that only lends to its Phantasm-like foreboding. It’s certainly more entertaining that other films of its ilk*, such as Aramand Mastronianni’s (He Knows You’re Alone, Cameron’s Closet) The Supernaturals, which I remember as being very boring—and I ejected it from the VCR less than half way through, never to watch again.

It’s unfortunate that Crounse disappeared from the industry (maybe he went into commercial work?) after two more films: The Invisible Kid (1988) and Sister Island (1993), as he showed a lot of promise. I vaguely remember the former as a theatrical with Jay Underwood, who was “hot” at the time. I never heard of the latter—one of the many low-budget romps from the extensive resume of Karen Black (Burnt Offerings).

There’s lots of familiar TV faces afoot: Guy Boyd (pick a late ‘70s/early ‘80s TV series) was a semi-regular on Remington Steele, a co-star on 2000’s Black Scorpion, and was in Brian DePalma’s Body Double—and he’s still active today. You can play “pick a TV show” with the late Dennis Lipscomb as well, with his starring roles in Cop Rock and Wiseguy, while Karlene Crockett was a regular on Quincy M.E and Dallas. Eyes of Fire was the only feature film appearance by Rob Paulsen, as he reverted into voice work and became Pinky from Pinky and the Brain (1995) and Yakko from Animanicas (1993). Keen eyes will pick up on Kerry Sherman, who made her debut in Greydon Clark’s Satan’s Cheerleaders (1977), and Fran Ryan, who’s been in everything from TV’s Gunsmoke to Bill Murray’s Stripes(1983).

There are two pretty clean VHS rips on You Tube here and here to enjoy.

* Night of Horror (1981) with more Confederate Civil War ghosts (one of those “the cover is better than the movie” flicks and a VHS-eject), Ghostriders (1987) with western ghosts deep in the heart of Texas (well made, but boring; a VHS eject), and Stones of Death (1988) with aborigine ghosts (Aussie Indians) going “Poltergeist” (better made, but ho-hum familiar). Honorable mention: William Grefe’s (Mako: Jaws of Death) awful but fun drive-In nostalgia romp Death Curse of Tartu (1966) with its burial ground Indians.

About the Author: You can read the music and film reviews of R.D Francis on Medium and learn more about his work on Facebook. He also writes for B&S Movies.

R.D Francis is a staff reviewer at B&S About Movies. For an easier-to-read text-only listing of his film reviews, type "R.D Francis" in the ABOUT search box. View all posts by rdfranciswriter