All hail Spanish horror! Your movies make my head hurt and yet I love them so!

David Rocha plays Paul, who was thrown out of medical school because he can’t stand the sight of blood. Now, he’s back home, living on the estate of Countess Olivia (Helga Line, Horror Express, Horror Rises from the Tomb), where his father is a gardener.

To say Paul is mixed up is an understatement. The film attempts to explain it by stating that Pail was raised as a girl after his sister died and has taken on part of her personality. He also likes to perform surgery on his dolls and remove their hearts. And oh yeah — there’s a female-voiced masked killer on the loose wearing a black wig and a white doll mask.

There aren’t many Spanish giallo films — I can point to Blue Eyes of the Broken Doll (AKA House of Psychotic Women), The House That Screamed, Clockwork Terror, Maniac Mansion, The Corruption of Chris Miller, A Dragonfly for Each Corpse, The Killer Is One of Thirteen and Glass Ceiling are some that I can think of. Of course, there’s also Pieces and Bloody Moon, but I feel that those are more slasher than giallo.

The thing about Paul — and this movie — is that instead of comely females writhing around half nude as in most giallo, our protagonist showers all of the time, except for when he’s not killing and dreaming that people in his life are mannequins. Seriously, the dude loves taking showers. He’s also given to going completely bonkers, running in slow motion past seagulls after smashing flowerpots with an axe while screaming “Leave me alone!”

Ah man, I totally loved this movie. It gives up who the killer is way early, unlike most giallo, but it’s so charmingly daffy and out of control. This is a movie that I’d never even heard about before it was sent my way. And man, that little Robert kid who pals around with Paul? That kid seems like a real handful. Why he hangs out with a murderous twenty-something man who identifies as a woman and everyone is cool with it is beyond me, but maybe 1974 was just that crazy.

If you didn’t get the hint, go get this movie now. Like…right now. 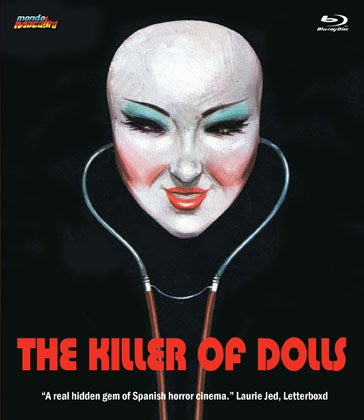 You can get this movie from Mondo Macabro, who as always put out some amazing cinema from around the world. Released for the first time ever in the U.S. and the first time on blu ray, it features a brand new 4K restoration from the original negative with Spanish audio and newly created optional English subtitles. Plus, there are new interviews with actor David Rocha and Dr. Antonio Lazaro-Reboll (author of the book The Spanish Horror Film), as well as new commentary tracks, one by Kat Ellinger and the other by Robert Monell and Rodney Barnett. You can grab your copy right here.

DISCLAIMER: This movie was sent to us by Mondo Macabro.