ABOUT THE AUTHOR: Robert Constant says, “I was born and raised in Hollywood, CA.  Went to live in Spain when I was 23 and stayed 10 years, managing an art gallery.  Came back to LA in 1992 and worked at an animation studio as a PA for awhile then worked buying and selling vintage clothes.  In 1996 I landed a gig as an assistant costume designer for an indie film and fucking loved it!  My first day on set I felt right at home.  I went on to do costume design/styling on indie/low budget films until 2005.  I worked with Fred Olen Ray, Jim Wynorski, Roger Corman, Playboy Channel Mystique films.  In 2005 I became a makeup artist and worked on House, Ugly Betty, Brothers & Sisters, Brooklyn 99 and day-checked on a lot of shows.  I did display design for the Hollywood Casino chain for a few years and in 2016 I moved to Chicago and now work as a server in a restaurant…a whole new branch of show business!  It’s my retirement job and I like it.  But I am really interested in writing about film and would like to do more and improve my skills.

This is a simple enough horror film, but it has several elements that make it stand out. It is charming and camp, with some strong horror at the end. It was made in 1965 by director Domenico Massimo Pupillo, credited as Max Hunter, and produced by Francesco Merli and Ralph Zucker, who also played Dermot the photographer. The director is well known for another gothic horror film, Terror Creatures from the Grave, which is mostly fun for Barbara Steele and Luciano Pigozzi, the creepy servant. Two of the actors in Bloody Pit of Horror are in Terror Creatures: Walter Bigari/Walter Brandi (Walter Brandt) who plays Rick and Alfredo Rizzo (Alfred Rice) who plays Daniel Parks. I warn you that all the names of the Italian cast and crew were anglicized which makes attribution difficult, but I love that kind of research.

The exteriors of the film were shot at Balsorano Castle in Abruzzo, a beautiful place. The interiors were shot at the Palazzo Borghese in Artena. Even with the obvious low budget it is pretty spectacular looking. It was filmed in “Psychovision”. 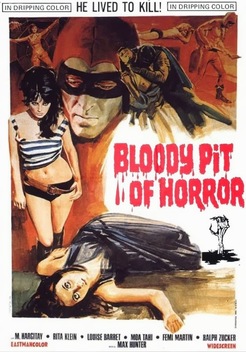 The film opens as a flashback to the days of The Crimson Executioner, a nobleman who was a violent sadist with sociopathic mania regarding superiority and moral and physical righteousness. We see him condemned to death by some unspecified tribunal and put into a sort of Iron Maiden, but male shaped so an Iron Madman. The door is slammed shut and we hear his screams. 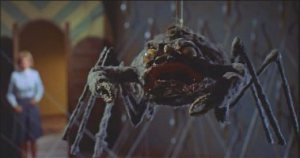 The modern-day film opens as a commedia sexy all’italiana. Producer Daniel Parks arrives at an old castle with his crew of models, cameraman and Rick, the writer. They are there to shoot “girly show” book cover art for pulp fiction novels. The doors are locked so they break in and wander around looking for locations inside. They are quickly apprehended by a muscled servant man with tight clothes and a forbidding demeanor. Producer Parks claims ignorance that anyone inhabited the castle and wheedles to be taken to the owner to do some business about renting the space for a day. This finally occurs and after a lot of chafing and arguing the owner, having seen the face of Parks’ secretary Edith, changes his mind and allows them to shoot but forbids access to certain parts of the house.

Now we have the cheesecake and I like it a lot. Very cute mid-century Italian flirtiness. The four models, billed as the Cover Girls get ready for the shoot. Femi Benussi plays Annie and it was her first film role. She went on to become a big star of the Commedia Sexy sub-genre and also played Lucia in Strip Nude for Your Killer. Moa-Tahi plays Kinojo. A beautiful and exotic actress, her death scene in this film is a great piece of low budget artifice, as she is caught in a huge and very nicely constructed spider web and the spider which bites her is a great piece of practical effects. I love to see what can be done with no money. The other two girls are cute and sassy. They go through several scenes of the photo shoot, all charming and very campy. But Suzy, one of the models, and Raul, another male of the party, go into the forbidden areas and start making out. They are caught by the owner of the castle and all hell begins to break loose. 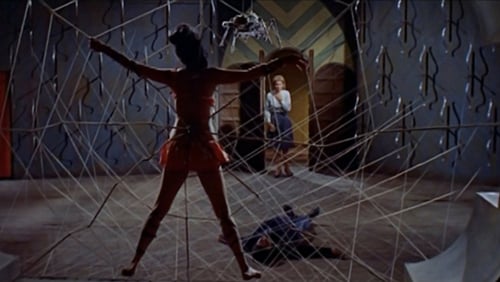 I am not going to detail the film any more because I want people to see it. I will say that the owner of the castle clearly has come to identify with the Crimson Executioner and has the same psycho feelings of great moral and physical godlike qualities. He is played by none other than Mickey Hargitay, in his first film role. He is an exceptional physical actor. He is all too often thought of as a “musclehead” as I read from one reviewer, but bodybuilding was a sport he came to after he had already been part of a famous acrobatic team as a young boy, a championship speed skater and a football player. In the final scenes in the torture chamber, as he cavorts around finishing off the hapless members of the poor photo shoot, he is so graceful and has a fierce presence. It made me think of rock star videos such as Billy Idol’s “Dancing With Myself,” except much more powerful. Some critics have called the film homoerotic, due no doubt to the Crimson Executioner’s obsession with physical perfection. But at several points in the film he exhibits disgust for mere mortal love and lust. I think this film is a study in narcissism and its relation to extreme sociopathy. 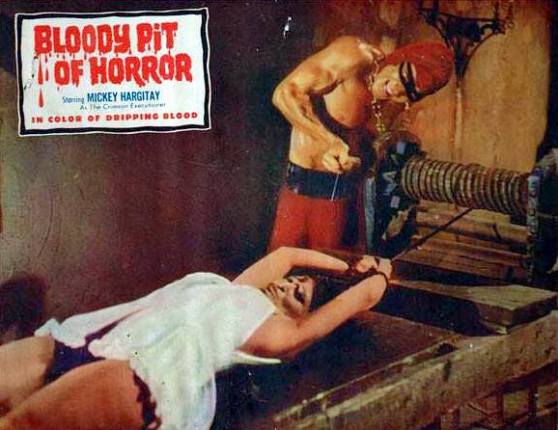