ABOUT THE AUTHOR: Roger Braden runs the Facebook group Valley Nightmares, which is all about the history of the films that played at the drive-ins and theaters in his home state of Kentucky. Besides that, he loves metal as much as I do and brings kick ass moonshine to the drive-in, which gains my eternal friendship. Normally, I’ve had everyone do their fave slashers, but Roger hit his ten fave horror films and I loved his list!

First a disclaimer about this particular list.  I have made several Top 10 lists over the years, by genre, decade and overall.  This is my Top 10 Horror films based on Flickchart.com where I’ve been ranking movies for a little over 5 years now.  This has a few different movies than my “official” list, but I’m alright with that, hope you all dig my list. 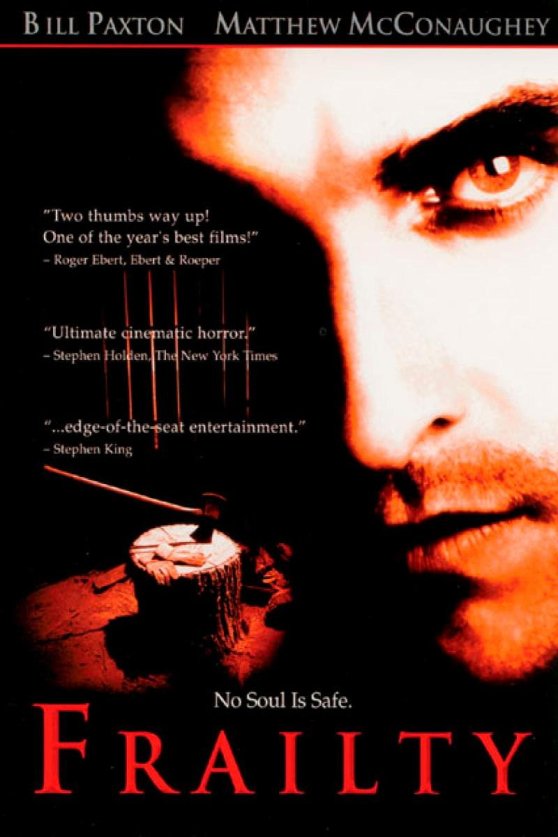 10. Frailty (2001): When the “God’s Hand Killer” returns to a small Texas town after many years, a man shows up at the office of an FBI agent convinced he knows who the killer is. But before he can tell the agent who the killer is he has to tell him about his childhood with his religious father, who “saw demons” and made his young sons become his “demon-slaying” helpers.

A fantastic cast helps make this a thriller that will keep you guessing just what the fuck is going on as the story unfolds.  And then you find out and it’s a shocker! Non-stop suspense, shocking violence, that sometimes involves children and a great storyline makes this really well made Horror film one you’ll want to discuss immediately after watching.

9. The Return of the Living Dead (1985): When toxic gas is accidentally released at a medical supply building everything dead in the building comes back to life. Disposing of the infected items in a nearby crematorium proves to be an even bigger mistake.

I love everything about this movie.  The story, characters, music, gore, humor, whatever is in this movie I love it.  Yeah, it changed the rules for a traditional zombie film and for me it’s all the better for it.  These zombies run, think, talk and attack all because they want to eat your brains because it “hurts to be dead” and brains relieve the pain.  I live in Louisville, KY and saw this opening night in a mostly full theater, the reveal at the end made us gasp and clap. After the end credits rolled we gave it a standing ovation.  For me it’s a perfect mix of horror and humor with a fantastic soundtrack that I still watch 2-3 times a year. 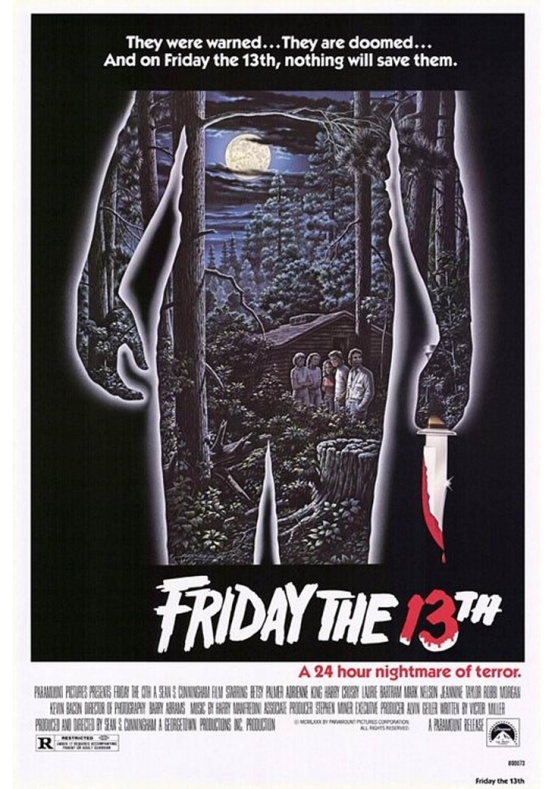 Camp counselor’s opening a long closed summer camp with a bad history discover that they should have left the place closed.

A film that just felt like it was really happening as you watched it, and for me still does.  The POV and “hidden” camers put you in the movie, and it’s a violent one from the start. The whole finale wore you out when you first watched it, how the Hell could you guess all that was going to happen?!  Solid flick that helped fuel the entire slasher era. 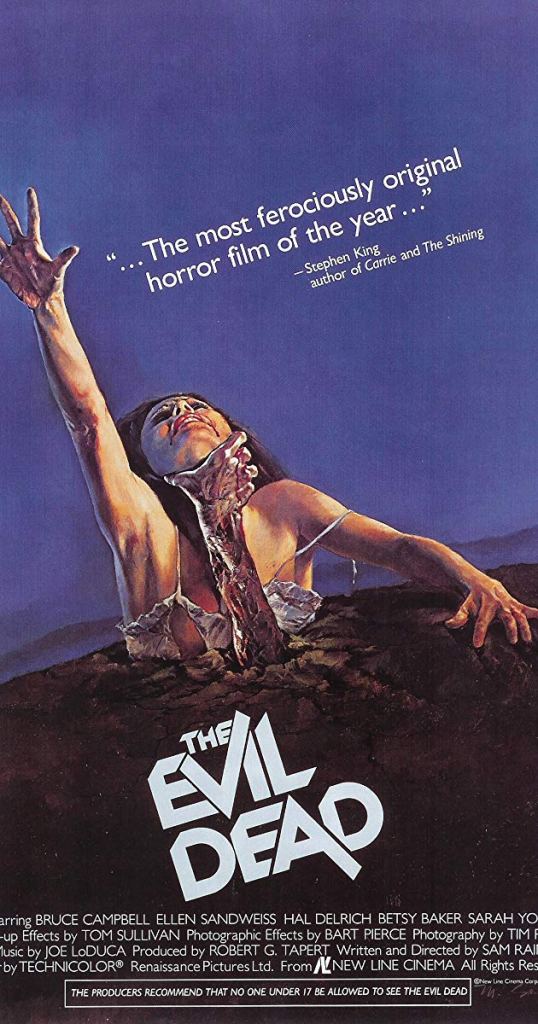 7. The Evil Dead (1981):  While vacationing in an isolated cabin in the Tennessee woods, five friends discover and read from an ancient book that unleashes pure evil.

Low budget film that set out to shock, and shock it does.  Violent, nasty and mean (pencil scene anyone?), this changed how we looked at Demonic possession films.  The camerawork keeps you off balance and helped create a whole new way of filmmaking. And our hero Ash, was unlike any hero we had met before. 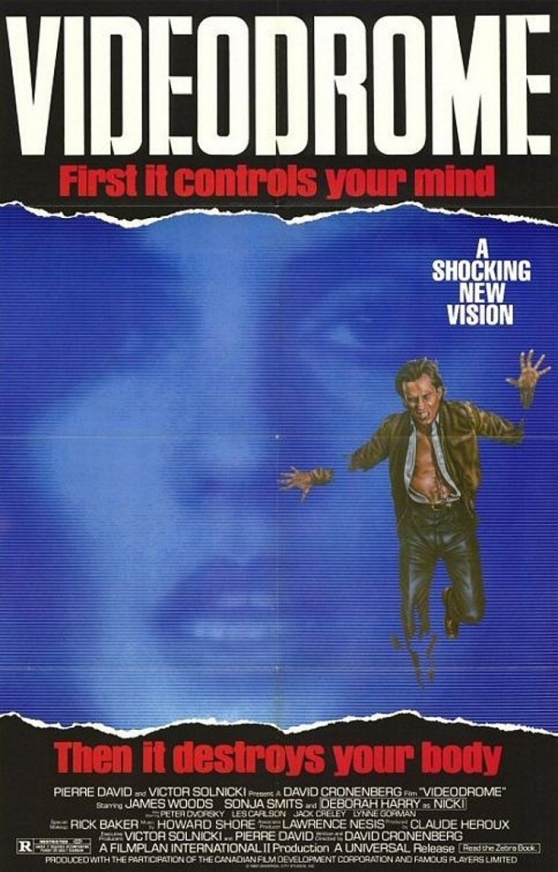 6. Videodrome (1983): Low budget TV president Max Renn loves to shock the airwaves with his alternate programming.  But when a show, “Videodrome”, is brought to his attention he might have found a show that is all to real.

First saw this as a VHS rental and I knew it was going to get multiple viewings.  The story and it’s meaning are deep and all but the most avid Horror fans embraced it at the time, Hell it only played here for one week. But getting to watch it as a rental, and on cable TV, numerous times and realizing it’s message was a warning of what we were becoming.  And it’s something we continue to stumble towards. My favorite Cronenberg film.

5. The Omen (1976): When a U.S. ambassador’s son dies during childbirth, he’s offered another newborn boy whos mother died giving birth.  But as the child gets older, strange events, death and a Priest’s warning indicate that the child might actually be the Anti-Christ.

The build up to this film was everywhere it seemed.  Print, TV, trailers, billboards all warned you to look for the warning signs of Biblical prophecy and that this film was going to show you what was coming.  And it more than delivered with it’s story and scares. Solid casting, locations, an amazing musical score and numerous gruesome deaths all drive this movie.  but it’s little Damien, with his black eyes and mostly emotionless demeanor who sells the film. That evil little bastard is terrifying.

4. Phantasm (1979): A teenage boy tries to convince his brother and his friend that the local funeral home is occupied by a human looking monster who is raiding the cemetary for his own evil plans.

This movie feels like you’re watching a nightmare.  Hooded dwarves roaming the the night, lethal flying spheres, a blind fortuneteller, a nasty bug born of “blood”, and one of the best Horror icons ever, The Tall Man.  Music and a colorful filming style just add to it’s story that works way better than it should. And that’s due to an extremely talented writer/director who’s cast bought into his vision and helped deliver a low budget classic.

3. Dawn of the Dead (1978-79 US): In this sequel to “Night of the Living Dead” the zombie plague is growing fast and major cities are falling.  Can a traffic reporter, his TV exec girlfriend and 2 SWAT members escape, find refuge and work together to survive the Dead and other bands of survivors?

As much as “NOTLD” changed the zombie film, “Dawn…” re-invented it again.  First saw this at a midnight showing in 1979. Getting dropped into the story as it’s happening is great, it pulls you in and adds to the shocks as the Dead attack and tear bloody chunks out of people.  The gore effects were (still are) incredible, characters that you care about, visual style and a story with a deep message all add up to a movie you can’t help but love. My favorite George A. Romero, and zombie movie.

2. Alien (1979): The crew of a spaceship investigate a distress signal from a nearby moon.  After landing, a crewmember is attacked by a facehugging parasite. Soon the crew find out that the parasite is an ever evolving creature, and it’s stalking them.

Another “freak out” movie that felt like you were part of the story.  This big budget sci Fi/jorror flick is so damn claustrophobic despite being set in a giant spaceship, and it’s just darkly filmed enough that you can’t quite see what’s around the next corner. Every part of the movie is top notch and it’s one that still delivers shock after well placed shock.  The ever evolving Xenomorph is horrifying in every growth stage and is my favorite movie creature. 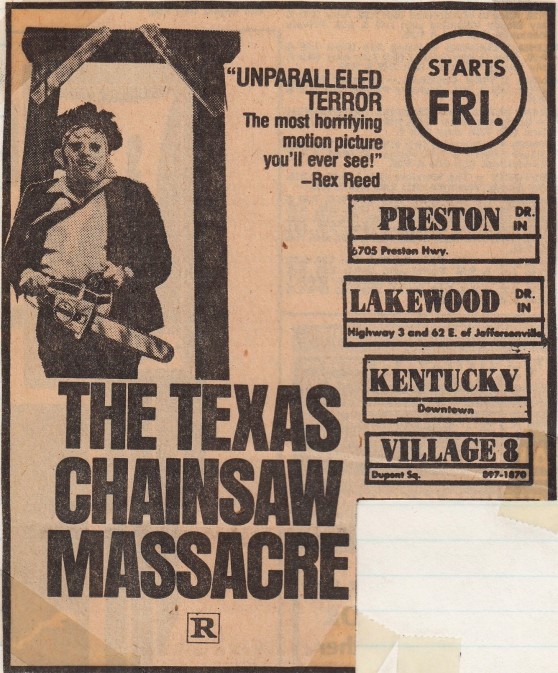 1. The Texas Chain Saw Massacre (1974): A brother and sister travel to Texas to check on their grandfathers grave and visit the old family homestead.

You know you’re in for something special when this one starts.  The opening narration as the words roll up the screen telling of impending death for our characters. Then the credits start rolling with flashes of long dead bodies and weird grating music playing.  Then you drop into the van, traveling across the hot Texas landscape. And you don’t want to be in this movie, bad shit is going to happen, they just told you! Besides that you know that van stank inside. Franklin looked like he could clear a room all by himself.  That so much of the movie takes place during the daytime is another testament to just how solid of a Horror movie this is. Once the violence starts it’s shocking, brutal and it hurts. And you see next to no gore, the film doesn’t need it, your brain imagines that you are seeing so much more than you actually do.  Look, once “Leatherface” makes his explosive appearance you just want the movie to be over… and there’s so much more horrible things that are going to happen. An excellent piece of low budget filmmaking that introduced us to another Horror icon, and his demented family.

No Top 10 is complete without a few honorable mentions, so here are more than a few that I love that could be on the list above as well.

The Thing, The Exorcist, Halloween, Shock Waves, [REC], The Blair Witch Project, Tarantula, Psycho, 28 Days Later, and A Nightmare on Elm Street are all excellent films and deserve their due.

Many thanks to Sam and bandsaboutmovies.com for starting this conversation and having me be a part of it!