Before he had the chance to make Spider-Man, Sam Raimi had wanted to make a comic book movie. Having failed to get the rights to The Shadow and Batman, he just decided to create his own hero. Drawing inspiration from Universal Monsters like The Phantom of the Opera as well as The Elephant Man, he created The Darkman, the tale of a once noble man driven to savagery as well as a tragic love story.

Raimi submitted the treatment to Universal Pictures, which was greenlit for a budget of $8-12 million dollars. Over twelve or more drafts — working alongside writers like Chuck Pfarrer, brothers Daniel and Joshua Goldin, and Raimi’s brother Ivan (a doctor who ensured that the medical and scientific aspects were authentic) — Raimi and his producer Robert Tapert pushed the character and movie further and further until they ended up with a three-part character arc: It starts with a sympathetic hero being destroyed, then him becoming filled with hatred before finally hating who he has become as he fades away from humanity.

Despite the movie performing worse than probably any Universal movie ever in test screenings, a great ad campaign — the Who Is Darkman? posters are amazing — and decent reviews allowed this film to make $49 million on a $16 million dollar budget.

Dr. Peyton Westlake (Liam Neeson) is working on a new type of synthetic skin that will help burn victims. However, every time the skin is exposed to light for more than 99 minutes, it disintegrates.

Meanwhile, his attorney girlfriend, Julie Hastings (Frances McDormand) has discovered information that proves that developer Louis Strack Jr. has been bribing zoning commission members to build a brand new city. When she confronts him, he confesses that it was necessary to create new jobs while warning her of Robert Durant (Larry Drake, who is incredible in this), a mobster who also wants the evidence to use against him.

At Westlake’s lab, our hero and his assistant Yakatito continue to test the skin when Durant and his men — including Ted Raimi as Nicky, Nicholas Worth (The Glove, Don’t Answer the Phone) as Pauly, Dan Hicks (Evil Dead II) as Skip and Dan Bell (who you’ll remember from Wayne’s World) as Smiley — break in to take the documents that Julie has found. Yakatito is killed and Westlake is torn to shreds — his hands are burned, his face is dipped in acid and an explosion throws him through the building as Julie watches from the street.

Westlake is found and brought to a hospital that experiments on him with a treatment that severs the nerves of the spinothalamic tract. Now, he no longer feels physical pain and the lack of sensory input overloads his adrenaline, giving him enhanced strength. However, he’s now susceptible to frequent bouts of alienation and madness. Look for Jenny Agutter (Logan’s Run, An American Werewolf In London) in a cameo here as the doctor who treats Westlake.

The rest of the world thinks he’s dead, so Westlake starts creating a mask of his original face to cover his burns. Seriously, the makeup by Tony Gardner are great. As he works away in his skid row lab — an homage to the Tesla coil filled lairs of Universal movies — he also works on wiping out Durant’s henchmen one at a time.

Darkman balances horror and superheroics in equal measure, along with romance and pathos. The end of the film, as Westlake fully disappears into his new identity as The Darkman and escapes from Julie into a crowd, is the best comic book ending I’ve ever seen in a film. Raimi gets it, even ending the film with dialogue where the hero finally accepts his name: “I am everyone and no one. Everywhere. Nowhere. Call me … Darkman.”

I love that Raimi took a somewhat Hollywood budget and turned in a movie that’s pretty much a modern take on Dr. Phibes, while keeping the spirit of Universal Monsters, filtered through the hyper colors of Bava and the kinetic zooms of Fulci. It’s also a movie that presents a hero that has completely and utterly lost his mind, yet we still are with him every step of the way.

Darkman would return in two direct to video sequels without Neeson playing the lead role, Darkman 2: The Return of Durant and Darkman 3: Die, Darkman, Die. There was also a thirty-minute pilot for a TV series made in 1992 that never aired.

Marvel Comics also published an adaptation of the movie and a sequel mini-series. Darkman would return to comics in 2006 in a crossover with the Evil Dead and Ash Williams (Bruce Campbell was the original choice for the lead and shows up at the end). There were also four Darkman paperbacks — The Hangman, The Price of Fear, The Gods of Hell, and In the Face of Death — published in 1994. 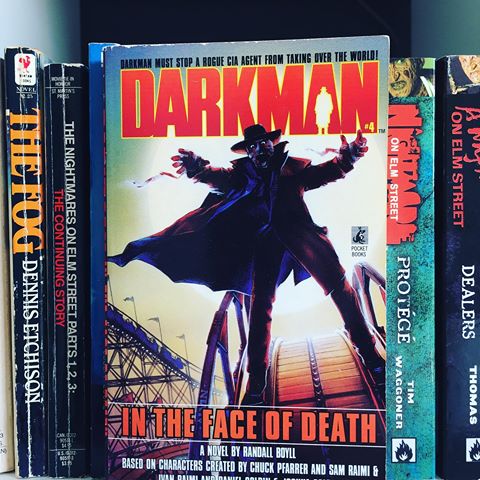 The cover art for this article comes from the vinyl release of Danny Elfman’s soundtrack. Like everything Waxwork Records releases, it’s incredible, boasting two gatefolds of Francesco Francavilla’s breathtaking artwork. 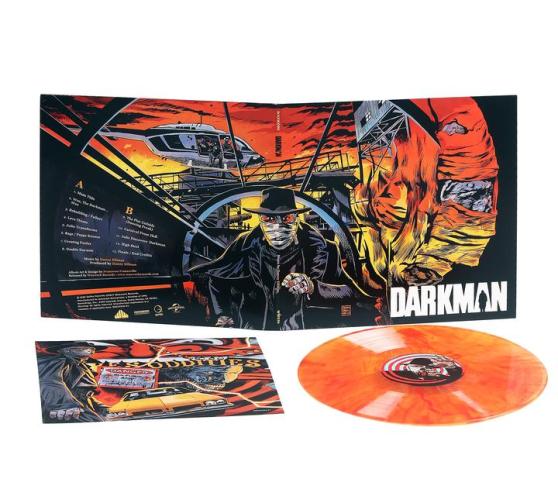 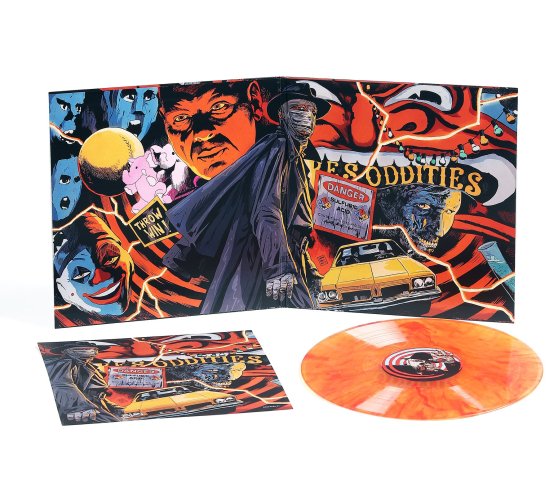