Originally airing on May 21, 1977, this show was co-written by Gene Roddenberry and Star Trek writer Samuel A. Peebles and directed by Clive Donner (What’s New Pussycat, the Get Smart reboot The Nude Bomb (which had Sylvia Kristel in it!) and the 1981 Charlie Chan reboot Charlie Chan and the Curse of the Dragon Queen).

I solemnly swear that I am not The Gorn.

William Sebastian (Robert Culp, I Spy, The Greatest American Hero) used to be a criminologist but now he studies the occult so that he can explain why humanity is evil. On one of his past adventures, the demon of lust Asmodeus cursed him, leaving him with a heart in need of constant medical attention from his live-in nurse and housekeeper Lilith (Majel Barrett, Nurse Chapel from Star Trek and Roddenberry’s wife). He asks an old colleague, Dr. “Ham” Hamilton (Gig Young, They Shoot Horses, Don’t They?) for help with a case.

A woman claiming to be Anitra Cyon comes to tell Sebastian that her family no longer requires his services. It turns out that she’s a succubus, or a demon who basically sexually devours men to death, and he defeats her using the Apocryphal Book of Tobit. Then, Mitri Cyon (John Hurt, The Elephant Man, Hellboy) takes them to London, but not before their plane almost gets taken out of the sky.

In London, they discover that Dr. Qualus, one of Sebastian’s associates, has already been killed. His house was on fire, he was mauled by wild animals and his body was found partially inside a pentagram. Then, they are rebuffed by Sir Geoffrey Cyon (James Villiers, Asylum), who has turned Cyon Manor into place of sex, drugs and devil worship.

Mitri gets attacked by dogs and when our heroes go to investigate the Manor, they come to believe that Asmodeus has taken over Geoffrey’s form. The truth is that Mitri is really the monster and that Geoffrey is his pawn who will sacrifice his sister. Of course, Sebastian stops the ritual and the curse is removed.

The Cyon family gives Sebastian a painting as a way of saying thank you, but the symbol of Asmodeus shows up in the corner of the piece, proving that his fight against evil is not finished.

But sadly, it was. This was intended as a pilot for a TV series. However, an extended theatrical version was released in the UK with additional footage that includes nudity during the Black Mass finale. There was also a novelization published in 1979. 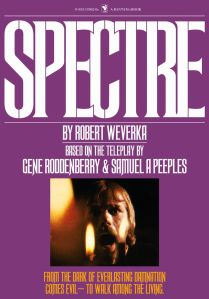 I would have liked to have seen what would have happened had this become a series. Within five years, Satanic panic would descend on America and movies and shows that took the 1970’s view of the occult would be passé. This is kind of a time capsule of that era.

Spectre isn’t available outside of YouTube and the grey market. That said, you should hunt it down. How else will you ever see John Hurt, one of the most talented actors of any generation, turn into a giant lizard man?