Sometimes the Chilling Classics rewards you with magic. Other times, it assaults you with a film like Sunburst, also known as Slashed Dreams. 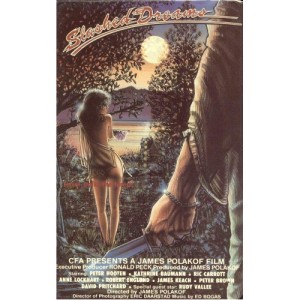 Robert (Peter Hooten, the original Dr. Strange) and Jenny (Katharine Baumann, The Thing with Two Heads and now a handbag creator) are going up to the woods to find their friend, Michael (Robert Englund), who has left the world of capitalism behind for a simpler one in the woods.

Once they’re up there, they run into one of a store owner played by Rudy Vallee. In his era, Vallee was one of the biggest teen hearthrobs ever. Here, he’s singing and trying to sell our protagonists a knife. You can also see Vallee in The Phynx and Michael Winner’s strange family film, Won Ton Ton, the Dog Who Saved Hollywood. Seriously, if you’re a fan of old Hollywood, that movie has so many cameos that your head will spin.

Anyways, while skinny dipping, two hooligans (James Keach and David Pritchard, the writers of the film) attack Robert and rape Jenny. Michael saves them, then Robert has a mudwrestling fight with the two men, who run away. Jenny reads a poem from Khalil Gibran and…that’s the end of the movie.

To no surprise, this slice of 1970’s post-hippie weirdness comes from James Polakof, who was also behind the lost woman in the 1970’s trying to make sense of it all by having sex with the devil movie Satan’s Mistress.

To make matter worse — or better — the film features seven songs by Roberta Van Dere, including one titled “Animals Are Clumsy Too” and “Theme from Sunburst.” Actually, best of all, the version of this film on the Chilling Classics set has a video effect over the Sunburst title, replacing it with a keyed out box and the words Slashed Dreams.

Why a movie about Deliverance-esque hillbillies raping and attacking a couple ala Straw Dogs needs a legendary jazz crooner and numerous Carol King sounding songs is beyond me. I met James Keach once, as his son’s band (he was once married to Jane Seymour) was playing a benefit for the charity my agency did work for. If only I had seen Sunburst, because I would have driven him insane asking a million questions about this movie. Or maybe he would have loved the fact that someone had actually seen it.

You can get this in the set or pick up all on its lonesome from Cheesy Flix.