I first read Melody Vena’s writing in this year’s Horror and Sons Halloween Horrors 2018 event and learned that she won the 2017 and 2018 Monster Movie Maniac “Monster Movie Marathon” contest by watching the most movies in one month. It’s super exciting to have her write for us and share a movie all about Jack the Ripper.

In 1913 author Marie Belloc Lowndes wrote a fascinating book called The Lodger; which is a fictional portrayal of the Jack the Ripper killings. By the year 1927, the book would have its first cinema counterpart,  filmed by none other than Alfred Hitchcock. The movie would see several versions from the years of 1932, 1944, 1953 and 2009. The 1953 movie that I am discussing was released December 31, in San Francisco and starred Jack Palance, Constance Smith and Byron Palmer.

Set in London, 1888 just as Jack the Ripper was beginning his reign of terror, an older couple decide to rent out their attic desperately in need of extra cash, on the third night of the killings a man appears and rents the room. The man, a researcher pathologist with a desire for experiments begins working in his newly rented room. The landlady meets the man and becomes suspicious, these suspicious feelings are fueled when her niece starts to show an interest in the man.

The movie opens to two police officers walking the streets discussing the killings when they come across a woman of the night being tossed from a pub, after she has a brief altercation with the owner, and throws some clever insults at the coppers, they proceed to walk her down the road for her safety. After a bit she decides to go off on her own down the dark alleyways of London and happens to fall victim to an off-screen Jack the Ripper. The following scene introduces us to Mr. and Mrs. Harley who are sitting in their living room, Mr. Harley discussing current events of the Ripper with his dog, when Mrs. Harley chimes in he has a way of curtly asking her to stop. Suddenly a knock at the door has both startled with Mrs. Harley asking “ I wonder who that could be at this hour” Mr. Harley replying “Well I’m sure if you think long and hard you’ll figure it out.” The door opens to Mr.Slade (a young Jack Palance) inquiring about a room for rent. The man enters the house and the family dog runs over wagging his tail and jumping on him, inciting a “He never does that to strangers,” from Mr.Harley; which earns him a glance from the man. 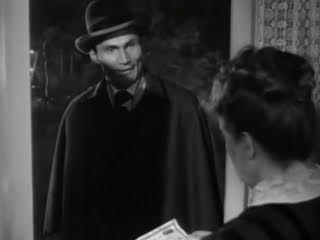 Mrs. Harley proceeds to show the man her rooms that are for rent, but once he steps inside he’s not very happy about the accommodations. After offering them for a reasonable rate he still asks if there are any other rooms, she says, “No unless you want the attic,” his disposition changes and he asks to be shown. Once in the attic he gets excited and says that he’s a research pathologist and will be needing to conduct experiments without interruption, and will also be renting the other rooms. They leave, he pays her in advance telling her that “his experiments take him out late at night,” his attention is drawn to an old Bible on the desk and they discuss who it was Mrs. Harley’s grandmothers; their conversation is cut short by the town crier yelling “MURDER IN WHITECHAPEL, JACK THE RIPPER STRIKES AGAIN.” Mrs. Harley lets her feelings be known after saying she wishes they would catch him, meanwhile, Mr. Slade, with a scowl on his face says”Jack the Ripper…what a horrible revolting name” and slams the Bible shut.

Without giving too much away, I suggest that you watch it for yourself. Black and white movies are always fun, and The Man in the Attic is sure to deliver for any classic movie fan, withitst musical score and dance numbers, to its suspense and mystery and an ending that will leave you guessing till the final frame. Any movie that has Jack the Ripper as its main antagonist usually pushes the envelope, and how could they not, not only was it never solved, it caused a widespread panic turning neighbor on neighbor. The Man in the Attic is able to show a little of what that hysteria was like, without gore, blood and visual effects, just sound and great acting.

I leave you with these final chilling words:

One thought on “CHILLING CLASSICS MONTH: Man in the Attic (1953)”