Paul Andolina, whose writes the site Wrestling with Film, is in charge today. Beyond loving wrestling, he also knows a ton about Russian and lucha films (and he even speaks pretty good Spanish, so we hear!).

War of the Robots — originally titled La Guerra dei Robot — is an Italian science fiction film released in 1978 most likely to cash in on the franchises of both Star Trek and Star Wars. I’d like to imagine this film came about when Alfonso Brecia and Aldo Crudo were as high as cucuzzi (Italian squash) are long which just so happens to be extremely.

I could not ask for a more crazy colored sci-fi romp than what this film offers. Female scientist Lois and male professor Carr are on the cusp of something extraordinary; they soon will be able to create any creature they want and make the first immortal man! However, their plans are cut short when a mysterious group of gold-clad humanoids attack and abduct them. It’s up to Lois’ lover Captain Boyd and crew to rescue them from their captors.

War of the Robots has a lot of twists and turns during its hour and thirty-nine minute runtime. There also is a cut of the film that is four minutes longer but the cut included on the Chilling Classics set is the shorter one.

When the crew finally gets to Lois and Dr. Carr it turns out nothing is what it seems at all. Louis is now an empress and Carr is mad with power over the gold-clad humanoids who turn out to be androids. The inhabitants of the planet Louis and Carr are taken to also happen to be wrinkly old monster folks. The latter half of the movie turns into a whole scale war. Battle is waged in caves, palaces, command decks and even in starship space battles.

This movie has a bit of everything; it’s got phasers, it’s got laser swords, it’s got mutants who live on irradiated asteroids but most importantly it has West Buchanan! West Buchanan is an American actor who starred in his fair share of Italian genre films. It just so happens that West Buchanan looks like he could be Harley Race’s twin brother. Harley Race is a wrestler who has worked for NWA, WWE, and WCW. I was really surprised how similar they look. Now the reason I bring that up is that I’m a collector and avid watcher of films that star professional wrestlers. That’s not the sole reason I enjoy this film so much it’s not the greatest film by any means but those who like campy science fiction films should find plenty to enjoy. I think most folks will especially like the scenes where androids are sliced in half by laser swords. 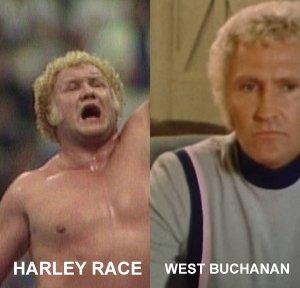 I must also point out the amazing score is by Marcello Giombini who also scored some of the Emmanuelle films, Sabata and even Antropophagus. If you have the chance to watch this I do recommend it. Apparently it is part of a series of science fiction films by director Alfonso Brecia, The films that precede it are War of the Planets, Battle of the Stars and it is followed by Star Odyssey. I hope I stumble across the other films as I truly did enjoy this film.

You can watch this one of the many uploads of War of the Robots on You Tube.

Don’t forget: We also reviewed Brescia’s Star Odyssey as part of our month-long tribute to the release of Star Wars: Episode IX – The Rise of Skywalker. You can catch up with all of those reviews with our “Exploring: After Star Wars” featurette. And we way over thought Brescia’s “Star Wars” movies with one of our weekly “Drive-In Friday” featurettes: “Pasta Wars with Alfonso Brescia.”

One thought on “CHILLING CLASSICS MONTH: War of the Robots (1978)”