The only reason anyone knows this movie is because of Jerry Gross. He bought it, paired it on a double feature with I Drink Your Blood and renamed it from Zombies to I Eat Your Skin and made this amazing trailer and double poster. 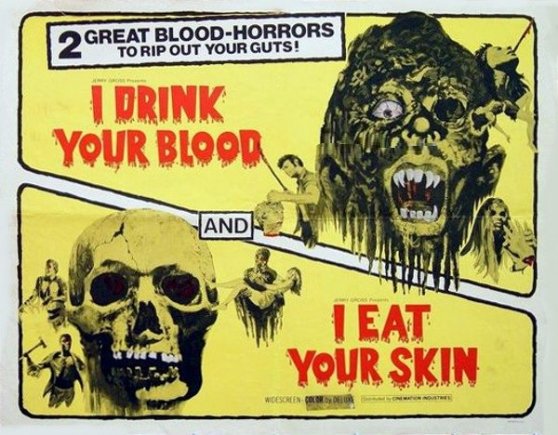 These two movies have nothing in common. I Drink Your Skin is a certified classic of the drive-in while this is a messy black and white film where a writer heads to a Carribean island looking to research voodoo for his next book. Then he meets a mad scientist who is trying to stop aging and hijinks ensue.

This sat on the shelf for six years and you can see why when watching it. Director Del Tenney is also responsible for The Horror of Party Beach, so that should explain so much about this one.

I can only wonder what order these two films played in. Would this be a good comedown from the acid lunacy of its tag partner? Or would the boredom of this one serve as absolutely no preparation for the bloodlust that was to soon follow? One wonders.

This is yet another in the unending stack of evidence that I continually present to Becca as reasons that I will never take a cruise or an island vacation. No one is taking me to the Green Inferno!

While patently ridiculous, the end of this film does pick up some steam, with a lengthy twerking exhibition/voodoo ritual. There’s also a great moment where a zombie carries a box labelled explosives into the prop of the escape plane, grounding our remaining heroes. And I kind of love that the writer hero of this one starts and ends the movie reading love scenes passages from the purple prose he writes to an enraptured audience of bikini clad women. And this is the guy I’m supposed to be rooting for?