Al Adamson made his breakthrough with this movie, going on to direct Dracula vs. Frankenstein, Cinderella 2000, Nurse Sherri and one of the most legitimately unhinged movies I’ve ever survived, Carnival Magic. Even stranger, he was murdered and buried beneath his hot tub in 1995, killed by his live-in contractor Fred Fulford in a plot that could have been one of his films.

However, today we’re talking about his contribution to biker films.

The Satans are a motorcycle club who roam the American Southwest, led by Anchor (Russ Tamblyn, TV’s Twin Peaks) and including Firewater (John “Bud” Cardos, Breaking Point), Acid (Greydon Clark, who directed Satan’s Cheerleaders), Romeo (Bobby Clark, TV’s Casey Jones), Muscle, Willie and Gina (Regina Carrol, Adamson’s wife who appears in nearly all of his films). We’re introduced to the gang as they beat up a man, rape his girlfriend and then push them and their car off a cliff.

They have the bad luck to get in the way of hitchhiker Johnny Martin, a Vietnam vet who is just trying to figure it all out. He gets picked up by Chuck Baldwin (Scott Brady, the sheriff from Gremlins) and his wife Nora. The old man’s a cop and wants to help the young Marine as he travels the highways. They all go to a diner, where we meet Lew (Kent Taylor, half of the inspiration for Superman’s alter ego), the owner, and Tracy, a waitress.

The Satans show up and ruin the budding romance between Johnny and Tracy, as they earn the ire of Chuck and his wife, who tosses a drink in one of their faces. Chuck tries to pull his gun, but the old man’s authority means nothing to the hardened toughs who beat the fuck out of him and rape his woman. Then, they kill all three — but not until Anchor screams out a totally inspired rant:

“You’re right, cop. You’re right, I am a rotten bastard. I admit it. But I tell ya something. Even though I got a lot of hate inside, I got some friends who ain’t got hate inside. They’re filled with nothing but love. Their only crime is growing their hair long, smoking a little grass and getting high, looking at the stars at night, writing poetry in the sand. And what do you do? You bust down their doors, man. Dumb-ass cop. You bust down their doors and you bust down their heads. You put ’em behind bars. And you know something funny? They forgive you. I don’t.”

The Satans don’t leave witnesses. Well, except for our hero and the waitress, who just escaped from Muscle and Romeo. Meanwhile, the gang meets three young girls and start partying with them. Gina can’t take seeing Anchor with other women, so she jumps off a cliff.

Willie tries to kill our heroes, but a rattlesnake saves them (!). Meanwhile, Firewater finds his body and comes to tell Anchor, who has gone insane and murdered all three girls. They fight and Firewater leaves the leader for dead. As he finally finds Johnny and Tracy, he is killed by a landslide (again, nature itself is against the bikers).

Finally, Anchor catches up to them and goes nuts, giving another soliloquy about being Satan. He raises Chuck’s gun to kill everyone, but Johnny simply throws a switchblade at him. “In Vietnam, at least I got paid when I killed people,” he says and at that, he and Tracy ride off on the villain’s cycle.

Satan’s Sadists was filmed at the Spahn Movie Ranch in Simi Valley, CA, at the same time the Manson Family lived there. Some movies would hide this fact. This poster will prove that this one wears it on its bloody sleeve. 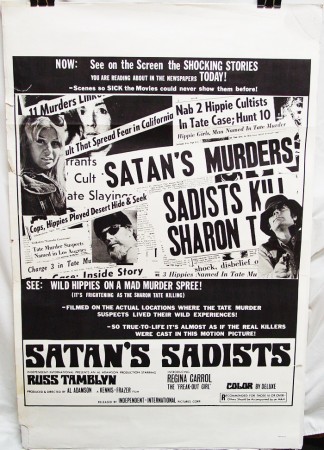 Truly, this is a movie that does not give a fuck. Just about no one gets out alive or unscarred. Any moments of pleasure are stolen or taken by force. The poster promises human garbage and this film delivers.