TV producer Denise is the — Sole Survivor, sorry, I had to say it — of an airplane crash, but she feels like she’s constantly being chased by something. Her combination doctor/boyfriend Brian (Kurt Johnson, The Fan) thinks it’s survivor’s guilt. But Karla, a psychic ex-actress, predicted the crash and has a warning for Denise. Then, you know, everyone around her starts getting killed and turned into zombies, leading even a skeptic like David to start to worry. 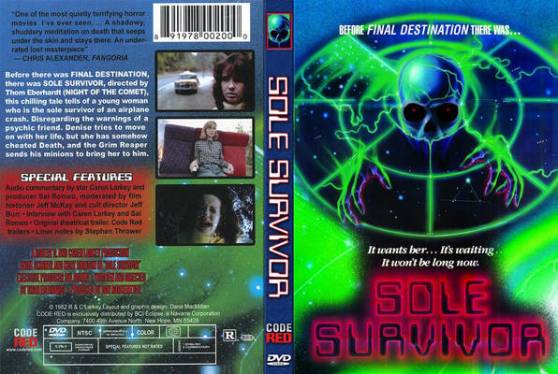 Of course, the dead kill everyone. They kill her best friend. They kill her boyfriend. They even kill kids and cab drivers. Anyone and everyone could be the living dead, out to drag Denise to the afterlife. And if the Carrie shock ending is to be believed, death isn’t about to stop with her.

Director Thom Eberhardt would go on to direct the vastly better film Night of the Comet. Here, the film drags at a very slow pace. We all know where it’s going and it feels like it may take forever to get there. But hey — there’s a Brinke Stevens cameo along the way. You can grab the Code Red blu-ray from Diabolik DVD. You can also watch it on You Tube.