Vivian Sotherland (Melissa Sue Anderson, Happy Birthday to Me) starts this movie in front of a pentagram, conducting a ritual that will send one of her teachers up in flames and keep her boyfriend David (Patrick Cassidy, brother of Shaun and half-brother of David). Light the black candles, it’s time for witchcraft in the 1980’s suburbs! 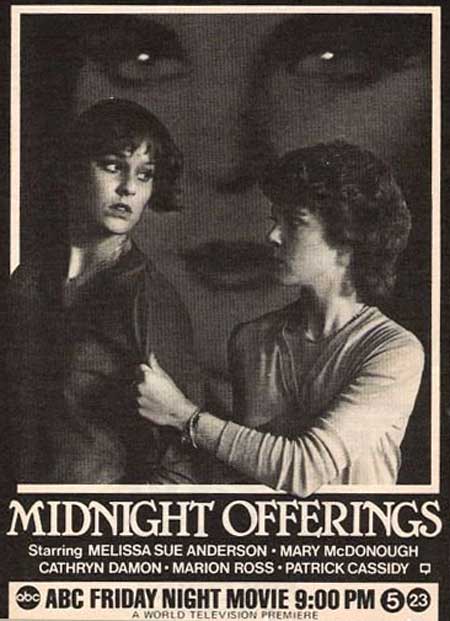 Originally airing on February 27, 1981, Rod Holcomb (the Captain America TV movie, as well as episodes of E.R., China Beach and more) directed this occult themed effort that mines the same territory as The Craft, albeit 15 years earlier.

Despite all that Vivian has done for David, he’s bored with her. Or maybe afraid of her. She’s the most popular girl in school with everything she wants. When new girl in school Robin (Mary Beth McDonough from TV’s The Waltons) arrives, David — and Vivian — are both fascinated by her.

Vivian’s parents (Gordon Jump from WKRP in Cincincati and Cathryn Damon from Soap and She’s Having a Baby) live in denial of their daughter’s power. Meanwhile, Robin’s father (Peter MacLean, Squirm) has already moved her far away from her last school as her powers made her an outsider.

Vivian gets her powers from sacrifices to Hecate, whereas former witch Emily Moore (Marion Ross from Happy Days) believes that Robin comes from a long line of witches. There’s an awesome scene here where Vivian’s mom reminds her that she was once a witch and her daughter basically decimates her psyche. There’s also a lot of dark eyeliner and poutiness, so if Vivian her been a student at my high school, I would have totally asked to do her homework and made her mixtapes with lots of Sisters of Mercy, The Cure and Ministry (back when they were a synth band) on them.

I wouldn’t mind that Vivian put Robin’s dad in the hospital or tried to set her house on fire. It’d be a pure teenage love. I mean, I fell head over heels for mean girls all the time who couldn’t set crows loose on their enemies. All they could do was talk down to me!

Basically, this film descends into Little House on the Prarie (Anderson starred on that show as Mary Ingalls) vs. The Waltons (as mentioned above, McDonough was Erin Walton). A wood shop becomes a war zone as the two young women battle one another to the death.

I really love the dichotomy that is set up between the two witches, one who has her power from trickery who only wants corruption and who hates her mother versus a good witch who lost her mother when she was young and who comes from a lineage of witches, with a name that is even filled with strength. The fact that all of this craziness is happening within the soul-crushing boredom of the California suburbs is even better.

The ending — with the burn witch burn line being shouted — is awesome. And dark. And doomy. And perfect.

Plus, stars like Vanna White, Dana Kimmell (Friday the 13th Part 3), Jeff Mackay (Lt. McReynolds from Magnum P.I.), Gary Dubin (Jaws 2) and Jack Garner (who is also in the TV movies This House Possessed and Fantasies) show up.

This movie has never been released on DVD, but you can find it through gray market sources and on YouTube. You should totally check it out!