If you ever watch a movie with me in person, you can tell exactly how I feel about it. If I love it, I will cajole you with bon mots and trivia and exclamations like, “Did you see that shot?” If I hate it, I’ll probably just fall asleep (even if I like a movie, there’s a chance I’ll still fall asleep). And if I really, really love it, I’ll literally run around the house screaming, “I FUCKING LOVE THIS MOVIE!” and start looking up facts online and make myself a complete maniac, like some 1970s kid before they invented Ritalin.

Warriors of the Year 2072 is one of those movies. Directed by Lucio Fulci, it’s all about a future world where criminals battle one another on motorcycles for TV ratings. But really, it’s an excuse for Italian film fans to get another chapter of Mad Max and Escape from New York. From 1990: The Bronx Warriors to The New Barbarians, Exterminators of the Year 3000 and so many more, post-apocalyptic films (see our list on Letterboxd) replaced westerns, slashers and sword and sorcery films, so of course, Fulci would make one.

This one’s written by Dardano Sacchetti and Elisa Briganti, who also worked on all of Fulci’s classic films like The House by the Cemetery, The Beyond and City of the Living Dead. It was originally part of a two-picture deal, followed by Blastfighter (Lamberto Bava ended up taking over), but Fulci had issues with the producers and had to go to court. In fact, Fulci had issues with the producers from the start, as he envisioned a futuristic Rome covered by domes instead of the skyscrapers that ended up in the finished film. Really, this is a film beset by issues — it’s the last time Sacchetti would work with Fulci (look for a review of the film Conquest that really put the final nail in the coffin in the new issue of Drive-In Asylum, which will be reprinted on this site soon).

Let’s get into it. Let’s get into 2072. Let’s go to Rome, where Cortez, WBS TV’s chief of programming is pissed that he can’t compete with the rival American TV network’s show Killbike. That show has criminals fighting to the death on motorcycles — creative title, huh? The star of the show, Drake (Jared Martin from TV’s Dallas), was discovered by Cortez and has become a big star. All Cortez can answer with is a show called The Danger Game, where contestants are virtually tortured, which gives Fulci an opportunity to have a The Pit and the Pendulum style deathtrap tear a woman’s throat apart. Whew — this film was a minute or so in and one only imagines that he was chomped at the bit to insert some gore.

Turns out Drake’s wife was killed a few days ago and he murdered the three men responsible. That’s good news for Cortez, who takes the flying UFO-style WBS headquarters (which is controlled by a voice called Junior) and started to train new gladiators to fight in Rome’s Coliseum. Drake — thanks to the murder charge — is one of those warriors. They affix a detector strip to his wrist, Snake Plissken style, and draws the ire of Raven, the chief guard. Then, he meets his fellow combatants: African-American Muslim extremist Abdul (Fred “The Hammer” Williamson, so called because his San Francisco 49’ers coach asked him to stop hammering other players before he starred in numerous Italian and Blaxploitation movies) Japanese serial killer Akira (Haruiko Yamanouchi, who has starred in both a Fulci film and a Wes Anderson film, The Life Aquatic with Steve Zissou, which feels like a trivia question in the making to me), German robber Kirk (Al Cliver from Zombi!) and Latin American terrorist Tango (Tony Sanders). An old co-worker, Monk, shows up to let Drake know he has his back.

To test Drake, they put him in a hate stimulator to see if he can murder people. Even after showing him a realistic hologram of his wife being killed and her killers taunting him, he won’t crack. This whole sequence gives Fulci the chance to create his cover version of A Clockwork Orange. The whole affair wins over Cortez’s assistant, Sarah. She does some research and learns that the murder was a set-up to get Drake away from the American TV network and back to Italy.

After showing up Raven, Drake leads a prison break that fails, getting the gladiators onto the news and building more ratings buzz. They even air Raven electrocuting the prisoners to build up the drama for the upcoming TV show.

Sarah tries to put it all together and goes to meet Professor Towman, the man who invented Junior. He’s given up computers and become a mystic, speaking about the soul of his machine. That said, he gives Sarah a chip to access the machine, at which point the professor is killed. Sarah chases the killer, learning that she is her fellow WBS worker, Sybil. Just before she can confront her, Sybil is shot and killed by an unseen assassin before Sarah is saved by Monk.

FUCK ALL THAT. It’s time for the WBS Gladiator Contest, which is basically Rollerball which Fulci’s penchant for blood, open flames and chrome helmeted cycle combatants. Sarah ends up riding into the games and informs everyone that they’ll be killed by their wrist bracelets 20 minutes after the end of the battle. The gladiators riot and kill all of the guards, but not before most of their number are murdered.

Drake, Sarah, Abdul and Kirk find out that Cortez was behind everything, as he wanted to replace Sam, the head of the network. But in the kind of twist that you only get an hour and change into an Italian post-apocalyptic rip-off, it turns out that Sam is really just a computer projection, broadcast live via satellite 200,000 miles above the Earth — and he knew the plan all along.

break into the main control room and discover that Cortez is found to have plotted the death of the survivors in order to discredit Sam and take over as station head. Cortez is killed by Abdul who shoots him. Then, a computer screen image of the company boss, Sam, appears and informs them that ‘Sam’ is really just a video projection of the computer, emanating from a space satellite orbiting 200,000 miles above the Earth. The computer knew of Cortez plan but decided to let the plan happen.

Kirk tries to take off his own bracelet and dies. The true traitor is revealed: Monk, who has a camera inside his eye and now looks like a mutant. Drake shoots him with a laser, but the team is running out of time. In two minutes, they’ll be disintegrated and Sam can use his signal to take over people’s minds. Somehow, Sarah uses a part of Monk’s eye to reprogram Sam in a MacGyver-like deus ex machina ending. Now that the battle is over, Drake and Sarah steal a hover vehicle and escape.

Made five years before The Running Man (but two years after the novel was written), Fulci takes his own spin on what comes after the end of the world. There are plenty of cool touches, like the strobe light training sequence where Williamson shows his martial arts prowess. It’s not The Beyond, but it’s not like you’ll be bored. I’d be interested to see what else Fulci could have done within the SF genre. This is filled with just enough weirdness that it kept my attention. It did more than that — it made me run around my house with pure glee, yelling, “NEW GLADIATORS! YAY!”

Also a quick shoutout — the site House of Freudstein is AMAZING. So much to read and such a great interview with Fred Williamson! There’s plenty to devour here!

PS – Troma got the rights to this and released it on DVD, which means that there’s a Lloyd Kaufman intro to the film. The fact that this hackneyed piece of shit (tell us how you really feel) gets to even be associated with Lucio Fulci makes my blood boil. It’s the same level of anger I get when I think about how Chasing Amy is in the fucking Criterion Collection! WHY? WHY? WHY?

You can get this from Severin who were awesome enough to quote us on the back cover! 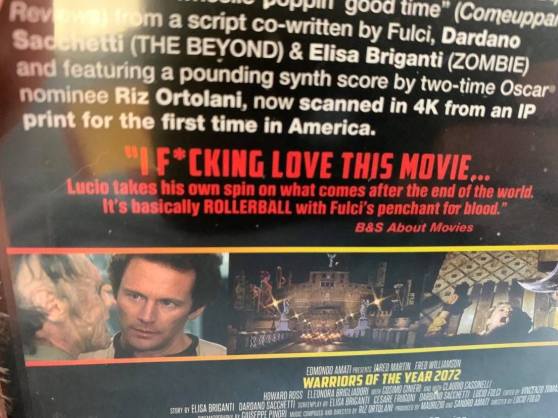