A lot of slashers came out in 1980 and maybe Terror Train isn’t as fondly remembered by some, but for those that are fans — like, well, your author — it works because you truly feel as if you’re on a train. You also get some incredible scenery and a killer that keeps shifting disguises, all while the film navigates themes that most movies don’t touch forty years later, including hidden love between male friends and a transgendered character that to talk more of would be a spoiler.

Quebec-born director Philippe Gagnon — well, Terror Train is from Canada — is working from a new script by Ian Carpenter and Aaron Martin, writers for the Netflix series Slasher. Everything starts just like the original, as Kenny (Noah Parker) is pranked by Doc (Matias Garrido) and gets away with it. By pranked, I mean that he ends up in bed with a dead body. Alana (Robyn Alomar) feels like the gang should confess, but instead the next three years of college go by and find them passengers on a tourist train that conveniently goes through a zone with no signal.

There’s still a Mitchy (Emma Elle Paterson). A magician (Tim Rozon) is on board. And yes, the clown gets killed early, just like the first movie. But does it have the magic of the 1980 classic? 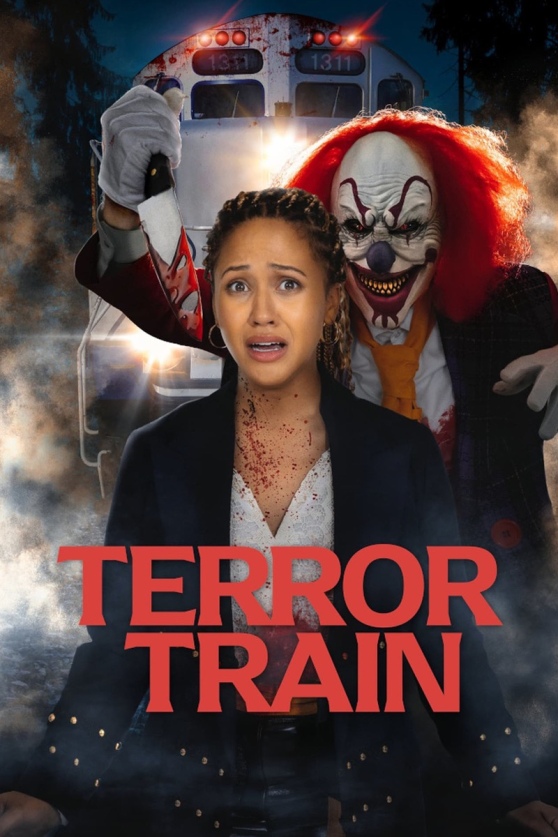 The killer only switches costumes here a few times, sticking to that clown costume, while the movie switches holidays from New Year’s Eve to Halloween. This also gender swaps Carne the conductor to be an older woman played by Mary Walsh. All of these decisions seem like changes for change’s sake; I have no issue with a female conductor but I really miss the steady guiding hand of Ben Johnson and the way he seemed like someone who genuinely cared about protecting his passengers. The lack of costume changes points to a script that doesn’t understand what worked so well; a clown is scary, but not knowing who the killer could be is much more sinister.

Another misstep is that in the original, Alana seemed to be someone trying to atone for her past sins, but also had enough of an edge that you believed that she’d go along with the prank. This version seems so unsure of herself that one wonders how she’ll survive.

The CGI train scenes and kills take away two other things so great about the first film, one that was actually shot on a train car to give the simulation that we were moving down the rails in the snow. This never feels like it takes place anywhere other than a room. And the weirdest part is there’s a Phantasm-style song that sounds so derivative that I was sure that they just followed the example of the Shaw Brothers and stole it.

This trip down the tracks follows the original pretty close until we switch tracks for the last ten minutes. Some folks may not miss David Copperfield and the long dance numbers. I totally do. The original is silly in many ways, but has some really frightening moments and unlike so many slashers, feels like it could happen.

Yet I wonder: who is this for? Anyone who loves the first one is going to be irked before it even begins. Is a train relevant for today’s audience? Oh well. I guess the rights were up and someone was going to make it. As always, we still have the original.