A notorious underground classic for the last 25 years, this so-called American Video Nasty is finally available to a mass audience. And thanks to Visual Vengeance — due diligence, I’ve recorded several commentary tracks and written liner notes for some upcoming films — this is available for the first time ever on blu ray. If you haven’t seen one of their releases yet, it’s like the Criterion Collection grew a sack and stopped releasing movies that eight snooty people care about and started releasing movies that eight maniacs care about with all the love and care that pure cinema deserves, if pure cinema is a movie with a flying zombie baby.

Directed by Matt Jaissle from a script by Todd Tjersland and Sammy Shapiro, things get started when police detectives Martin Manners (Steve Sheppard) and Orville Sloane (Gary Browning) arrive too late to save Manners’ sister from being the next target of hockey-masked rapist serial killer Logan (Isaac Cooper), a killer who has aready claimed two hundred victims. Manners snaps when he gets to the scene and becomes judge, jury and executioner as he blows Logan away.

Some time later, a Luciferian gang marches through the cemetery where Logan has been buried. They kill his infant child — living up to the promise of the Satanic Panic — and throw it into Logan’s grave before taking turns urinating on its dead corpse, all the while chanting rituals and making you consider whether you’re ready for what this movie has to deliver. This ceremony brings Logan back, except now he has a yard-long appendage and he’s ready to use it on any girl unlucky enough to get in his way, including German porn star Dru Berrymore and a girl who is assaulting the tradesman’s entrance of a blow-up doll that Logan falls in love with.

Keep in mind — this baby is totally a toy and that fact is never disguised, pushing this movie from simply strange into sheer madness, the kind that I hunt down and treasure. 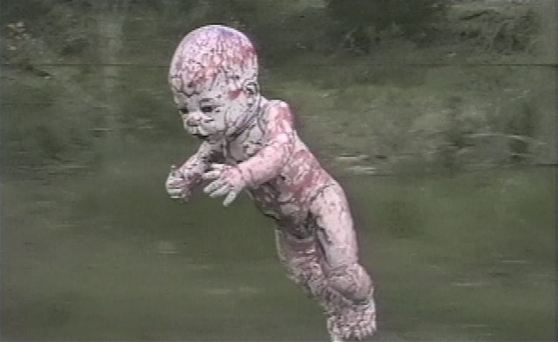 Two of the cult members, Barney (Jason McGee) and Jack (Christian Curmudgeon) are trying to escape the carnage they created, as the baby comes back as a flying zombie with a cartoon voice and Manners continues to go down a dark path filled with violence and drug use.

How could this movie be made any better? Well, it’s dedicated to Joe D’Amato and trust me, I think the man of many names would approve of the sheer lunacy and exploitation madness that this movie contains.

Just a warning: nearly every scene in this movie is filled with sex, violence or sex being interrupted with violence. It’s a vile, disgusting movie with a helium-voiced flying demon baby, and you’re not going to find anything else like it anywhere.

Necro Files 3000 (2017): Two decades to the very day, the Necro Murders are happening again. Investigative journalist Phineas Hogweather (played by a Count Chocula puppet) is watching his favorite cam girl when she’s assaulted by the undead and very much alive again Logan. After meeting up with occult authority Professor Blackthorn (a baby doll with a Magic Marker drawn beard), the creature is chased around the planet and back to America, where our heroes unleash the Pentagon’s deadly Killbot 9000 and, well, kill everything.

Made in Superpuppettronimation — which mainly means throwing blood at toys — and featuring just as much sex and violence as the original, but maybe even more because it’s harder to be offended by puppets and dolls, I had an absolute blast with this absurd film, one that takes a full minute to explain that we’re in the jungle, as we see the jungle, but then keep hearing Hogweather and Blackthorn discuss just how dark the jungle is.

A more than worthy sequel. 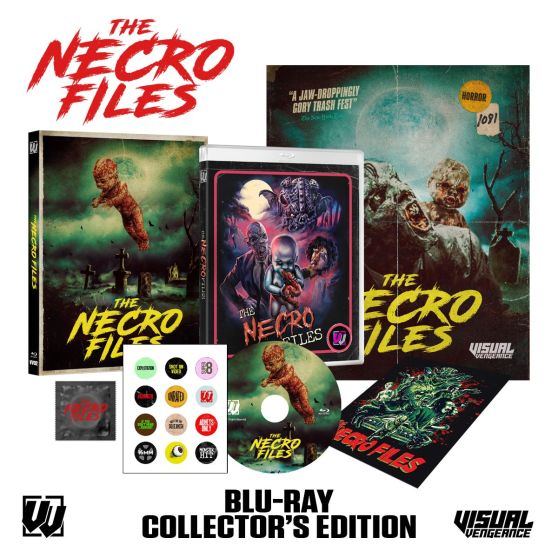 Select bonus features in Video Venegance’s blu ray release of the Necro Files — available from MVD –include a brand new commentary with director Matt Jaissle, another brand new commentary with Matt Desiderio of Horror Boobs and Billy Burgess of the Druid Underground Film Festival, a new on-camera interview with Jaissle, his films Necro Files 3000, The Corpse and some super-8 films, Dong of the Dead: The Making of The Necro Files, a Chilean talk show appearance, a limited edition slipcase, reversible sleeve art, a collectible mini-poster, “Stick your own” VHS sticker set and even a The Necro Files condom that says that it isn’t for human use, which is always nice.
Get it from Diabolik DVD or watch the Visual Vengeance edition on Tubi.
You can follow Visual Vengeance on social media on Instagram and Twitter.