ABOUT THE AUTHOR: G.G. Graham is a cult film cryptid, horror hag, and exploitation film explorer of the dusty and disreputable corners of cinema history. The street preacher of Z-grade cinema can be found at Midnight Movie Monster, as well as writing for various genre sites and print publications, or on Twitter and Instagram @msmidnightmovie. Visit her blog at www.midnightmoviemonster.com and Twitter @msmidnightmovie.

The 1990s brought the concept of extremity to ridiculous extremes. Everything from toy cars to soft drinks to discount drugstore deodorant was being rebranded to reflect the tastes of a new generation perceived to be indifferent at best, and slackers at worst. A never ending pile of consumer goods, sporting events, and media properties rushed to cloak themselves in high contrast color palettes, creative spellings and other assorted folderol meant to convey the nebulous concept of “attitude”.

Independent wrestling promotion ECW (Extreme Championship Wrestling) was one of the very few creations of the era that understood the concept of “extreme” on both a literal and marketing level. The brand incorporated more international performers, and had a heavy emphasis on hardcore matches. Unlike the comparatively slower paced and family friendly fare of the (then) WWF, ECW pushed the boundaries, booker Paul Heyman innately understanding that what most interpreted as the audience’s love of “attitude” was actually more of a search for perceived authenticity.

Matches bursting with blood, weapons, and barbed wire merged with storylines that gleefully destroyed the previous boundaries for depictions of sex and violence in wrestling. The promotion blithely blurred the lines between performers and their in-ring characters, transgressing the conventions of classical kayfabe and offering something that felt more genuinely unfiltered than its more polished competition. If anything, ECW was an early harbinger of the sort of carefully curated “realistic” unreality that would come to dominate all of mainstream television (wrestling or otherwise) later in the 90s.

For a sport so often sniffily dismissed as fake, Jerome “New Jack” Young dragged real life violence and rage behind him like they were just another weapon in his omnipresent trashcan, an outlier even on the roster of a promotion named for the rough and ready fringes. To tell the story of his life and career is to discuss the deeply ingrained racism that was an unavoidable occupational hazard in working the rural South, the countless jumps from impossible heights, and a history of hidden blades that lead to both a winding network of facial scars and New Jack facing multiple sets of charges for felony assault.

Watching the opening minutes of Danny Lee and Noah Lee’s documentary New Jack, it’s quite obvious that years of living on the edge makes a fall inevitable. Like many veteran wrestlers, the 2019 version of New Jack is wracked with old injuries, in the legacy act stage of his career. He makes his living working local shows for smaller promotions, often wrestling up and comers who both fear his reputation and revere his ring persona.

One of the film’s few visual flourishes makes the point beautifully, cutting together New Jack’s various ring entrances over the years. Theme song “Natural Born Killaz” pounding on the soundtrack, the familiar trash can in tow, but the movements slower and the scars more prominent over time. The crowds get more sparse, cell phone cameras replace the television versions, but it’s better to be on fans’ minds than off.

Rather than any strict chronology, the rest of the documentary tends to wander back and forth between past and present, without much structure to which events it chooses to highlight at any given time. Within the first 15 minutes the film careens between the previously mentioned house show, to the 2004 in-ring stabbing of opponent Hunter Red, to New Jack’s violently abusive childhood. This informal, snapshot style dominates the rest of the film, combining archive footage, new interviews, and New Jack’s candid reactions to videos from his wrestling heyday. 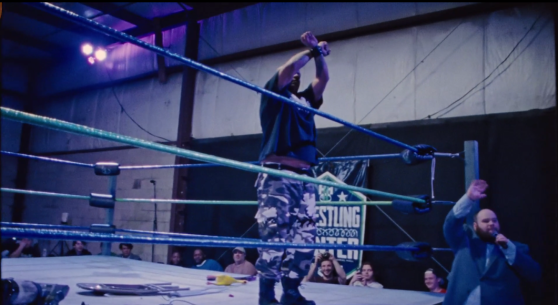 For established fans, a lot of the topics at hand will be familiar. From the surface of the sun level heat that a Black tag team with a gangbanger gimmick drew in the below the Mason Dixon territory of Smoky Mountain Wrestling, to the addiction struggles that marked New Jack’s ECW glory years, to the cumulative injuries collected over decades of high flying dives off balconies and steel chair shots, the documentary primarily busies itself with territory that has been well trodden in previous interviews.

The abundant charisma that made New Jack’s ring promos so electric to watch is still present, even when he’s detailing his most volatile actions. It is surprisingly easy to get wrapped up in how he recounts events, even if it’s a story of deeply questionable ethics and near miss criminal liability. He’s a born storyteller, and as these controversies have been a topic of debate amongst fans and press for years, he’s had plenty of practice in telling them to maximum effect.

For those keeping score at home, New Jack is remarkably consistent in his views on his most infamous moments—the artery severing blading of the “Mass Transit Incident” that nearly sank the nascent rise of ECW, tossing Vic Grimes off a scaffolding in retaliation for a previous botched stunt, the hospitalization required weaponized beatdowns of both Gypsy Joe and Hunter Red— often couching them as the natural outgrowth of opponents who lacked suitable experience in the ring or respect for their fellow wrestlers. He also doesn’t bother to hide how his heavy cocaine usage at the time may have shortened the fuse on his already explosive temper.

It’s rare that a documentary subject is both incredibly willing to answer questions, engaging while doing so, and utterly indifferent toward garnering viewer sympathy or revising history. That makes New Jack‘s general reluctance to venture beyond well worn paths all the more disappointing. The co-directors don’t seem to have a great handle on what form they wanted the finished film to take. While their occasional interjections often skirt the edge of some revealing territory, they cut abruptly to another subject rather than probing any deeper. This leaves the most interesting nuances of New Jack’s larger than life story unaddressed at the edges of the frame.

How did New Jack feel about being asked by bookers to monetize rural racism, when he was the one who took on the largest physical and psychological risk, for what was likely the smallest cut of the profits? What would he have considered to be going too far, and what ideological line separated those instances from a career full of real life violence in the context of fictional narrative? How did he manage to continue working for decades, despite openly admitting his liability nightmare tendencies to go dangerously off script when provoked? How did any of this reconcile with the man who was fiercely protective of keeping his surprisingly ordinary roles as a husband and parent out of the public eye almost entirely?

New Jack offers an identity crisis with no real answers. By editing the film into series of vignettes, the directors have created something that likely will be too disjointed to paint a clear picture for casual wrestling fans, while offering little new insight for dedicated devotees of hardcore wrestling history. Given that the film’s Slamdance Festival premiere is an accidental epitaph —Jerome Young passed away in May of 2021, at age 58— it is unfortunate that New Jack doesn’t have anything more definitive to say about the man or the character he created. It feels like a missed opportunity that film satisfies itself with a surface level journey into the familiar celluloid arc of an aging wrestler having to fend for themselves once the inevitable injuries force the final bell on their days as a headliner.