Movies get hyped today, but no movie in my experience has ever been hyped like King Kong. I was four years when it came out, a total monster kid, and it arrived at the most perfect time ever in my life, a time when I had no school, no work and only limitless time to obsess over the modern version of King Kong climbing the World Trade Center towers instead of the Empire State Building.

Produced by Dino De Laurentiis and directed by John Guillermin (The Towering Inferno, King Kong Lives) with effects by Carlo Rambaldi (E.T., A Lizard in a Woman’s Skin, Planet of the Vampires, A Bay of Blood and many more), this movie was on everything — glasses from Burger Chef, clothing, even a Jim Beam cocktail! 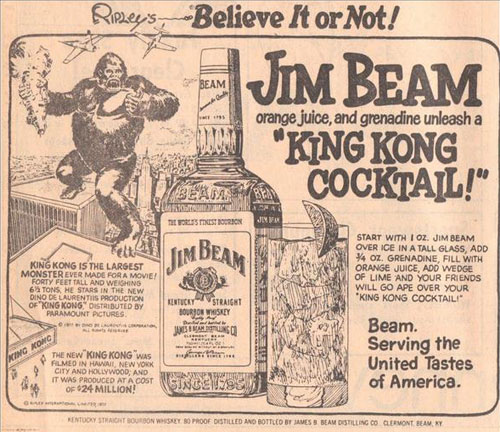 Written by Lorenzo Semple, Jr., the man whose words brought Batman to the small screen and Flash Gordon to the big one, this movie was born in controversy.

That’s because the idea to remake King Kong — not the biggest idea in the world, it was the original blockbuster — was ABC executive Michael Eisner, who pitched the idea to Universal Pictures CEO Sidney Sheinberg and Paramount Pictures CEO Barry Diller.

Dino De Laurentiis heard this, got the rights from RKO — to be fair, parts of the story were public domain — and hired Semple and Guillermin* to get the movie done fast.

Before the movie was released, Universal sued De Laurentiis and RKO for breach of contract and started making their own remake that they were calling The Legend of King Kong, which would have been directed by Joseph Sargent (Jaws: The Revenge). More lawsuits flew and everything was settled by January of 1976 so that the movie could finally be released. 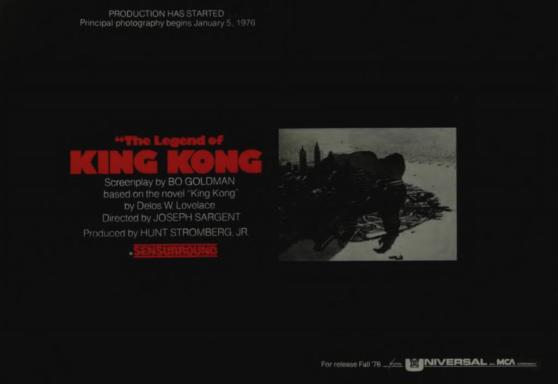 To take Dino’s side, he always claimed that he always wanted to make Kong because his daughter had a poster up in her room that he saw every morning. When Diller asked him to make a monster movie, he went right to remaking the 1933 classic.

With a cast that included Jeff Bridges as hero Jack Prescott, Jessica Lange as the heroine Dwan and Charles Grodin as Petrox Oil Company executive Fred Wilson, this was a movie inside the 70’s and the worries of the fuel crisis.

Seeing it as a kid, I realized the first time that I’d been overwhelmed by hype that could never be lived up to. That said, subsequent rewatches have been more enjoyable.

I kind of wish Hammer had made their version. Some of the footage shows up in a Volkswagen** commercial with animation by Ray Harryhausen (O’Brien’s assistant)  Jim Danforth and David Allen (the men who made Equinox!). It also features Fay Wray’s daughter as Anne Darrow! Supposedly, RKO never wanted to remake King Kong when Hammer approached them.

Yet as I get older, I have to shout “Che palle!” to Dino, who told Time, “No one cried when Jaws died, but when the monkey dies, people are gonna cry. Intellectuals are gonna love Kong. Even film buffs who love the first Kong are gonna love ours. Why? Because, I don’t give a crap.”

*He originally wanted Roman Polanski. Michael Winner and Sam Peckinpah were also asked and man, I want to see the King Kong they would have made.