EDITOR’S NOTE: While not fully a Barry Mahon movie, this film — originally watched on December 24, 2017 — has one of two different Barry Mahon films inside it. Read on — this is probably the most insane movie I’ve ever watched and I still think about it all of the time.

This movie was made for children. Let’s keep this in mind as we discuss it.

Sure, it was created by R. Winer to use existing Barry Mahon films — either Thumbelina or Jack and the Beanstalk — and create a framing device of Santa so that it could be released over Christmas. But what emerged was a piece of cinematic horror that can try even the bravest of souls.

In the North Pole, the elves are worried about Santa not being there. Where is he? Oh, stuck in the sand on a beach in Florida, with the reindeer flying away because of the heat. Santa sings a song about his problems, then he falls asleep.

Santa uses telepathy to reach out to children, several of whom are fistfighting. They race to help him, asking him logical questions like, “Why don’t you just get on a plane?” He says he cannot abandon his sleigh, so a pig, a sheep, a donkey, a horse and a gorilla come to help while Tom Sawyer and Huckleberry Finn watch.

This movie is drugs.

Santa gives up — even after the advice he gave the kids — and goes to sleep. But then the kids come back in a fire truck driven by the Ice Cream Bunny, a scene which ruined my already tenuous grip of sanity, leaving me lying on the couch holding my sides while my eyes cried deep tears of laughter. 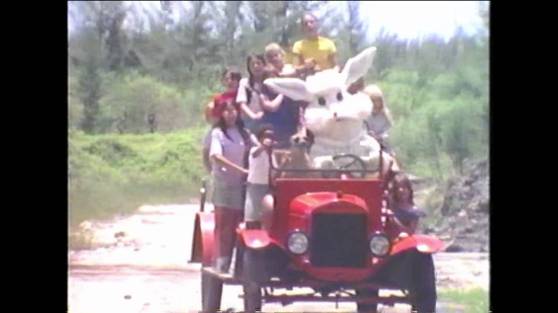 Yes, Rebel the dog knows the Ice Cream Bunny, who drives Santa to the North Pole, leaving behind the sled, ruining the main conceit that Santa had brought up before, that he would never leave his sled behind. The children wonder what to do and then the sled disappears.

The conflict that has driven this movie was all a lie.

Why did we sit through all of the animals trying to pull the sled?

Why did we have to watch the movie within a movie?

Why were Tom Sawyer and Huck Finn in this film?

What the fuck did I just watch?

This movie was probably created as part of the Pirates World amusement park in Dania, Florida, which had already produced the two films within the film. But with Disney World opening in 1973, this little enterprise was doomed. Was the Ice Cream Bunny one of their characters? Because we’re led to believe that he’s well-known, but I’ve never heard of him.

This is a movie that will break you.

I really think this one tops it all.

Did I mention that when the Ice Cream Bunny comes to rescue Santa that he almost runs over Rebel the dog? I mean, this genius dog that was able to summon a magic bunny runs in front of a moving vehicle to drink out of a muddy pool of water, nearly being run down by a fire truck driven by a man in a rabbit suit that surely can’t see him! Look for the jump cut where Rebel is back and moved to safety!

And Pirates World is even crazier when you learn that Led Zeppelin, Black Sabbath, Alice Cooper and David Bowie all played the theme park! You can see footage of Iron Butterfly playing the park in the movie Musical Mutiny.

The director Barry Mahon, who created the films for the park, lived an insane life that inspired the film The Great Escape. During World War II, Mahon Mahon escaped Stalag Luft III only to be captured on the Czechoslovakian border. He escaped again, was recaptured again, and was finally saved by Patton’s 3rd Army in 1945.

So what did he do when he got back to the USA? He became Errol Flynn’s personal pilot and manager. His directorial credits alternate between children’s fare, like Santa’s Christmas Elf Named Calvin and The Wonderful Land of Oz, and nudie cuties like Fanny Hill Meets Dr. Erotico, The Diary of Knockers McCalla and The Beast That Killed Women. He also directed 1961’s Red Scare shocker Rocket Attack U.S.A.

No one is really sure who R. Winer is, but some think he was Richard Winer, a cinematographer and director whose entire IMDB page is devoted to films he either created or appeared in that were all about the Bermuda Triangle and UFOs. Of course.

This is the kind of film David Lynch dreams that he could make. Alejandro Jodorowsky lives in abject terror of its unholy power. You should have to wear some kind of protective brain plate when you watch this.

I can’t keep this to myself. If you want to subject yourself to the assault that is this film, here it is. Don’t say I didn’t warn you.

You can also watch this on Amazon Prime.