Editor’s Note: This review originally ran on August 2, 2020, as part of our reviews for Mill Creek’s Savage Cinema 12-Movie collection. We’re bringing it back as part of Mill Creek’s B-Movie Blast 50-Film pack. Faux-Charlie’s Angels that look like they’re out of a The Dukes of Hazzard crossover episode . . . and rails? We ain’t hatin’! Program it, Mill Creek!

The Mill Creek Savage Cinema box set has twelve movies, some with great looking pictures, others that have been battered beyond belief. If you’re not a snob, you’ll find something enjoyable on this. I know I did! I started with this film, one of the few drag racing movies that I’ve ever watched. 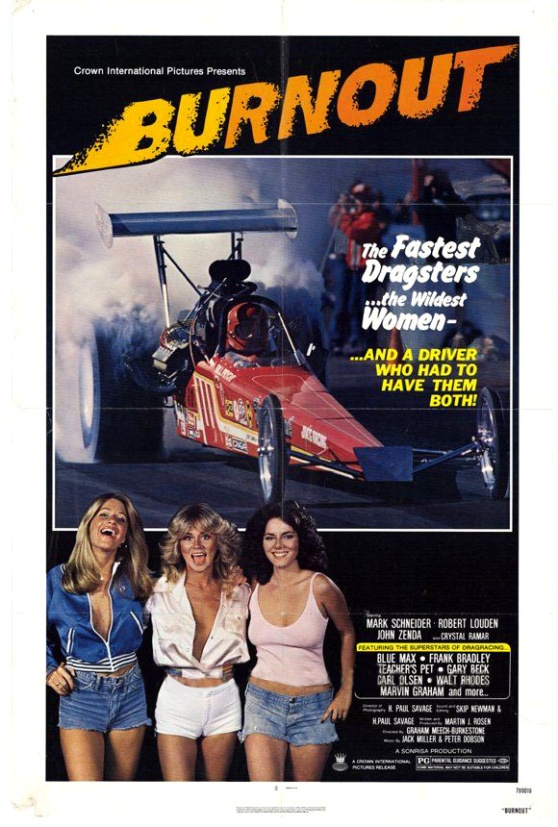 If you know anything about drag racing — and I sure don’t — this movie is filled with the stars of the 70’s. That’d be Don Garlits, Marvin Graham, Gary Beck, Don Prudhomme, Raymond Beadle, Tony Nancy and Shirley “Cha Cha” Muldowny, the only name I know because the movie Heart Like a Wheel is all about her. Shirley is great because she’s super outspoken, claiming that Jamie Lee Curtis should have played her instead of Bonnie Bedelia, who she called a “snot.”

I actually looked up other drag racing films — just to see if there were any other than these two examples. There are! They would be Funny Car Summer, Seven-Second Love Affair, Drag Racer, Wheels of Fire, Fast Company (directed by David Cronenberg!), Right On Track, More American Graffiti and Snake and Mongoose. If you’re now thinking, “I bet B&S About Movies is going to do a theme drag racing week,” you know us oh so well. We did, sort of: check out our “Drive-In Friday: Drag Racing ’70s Doc Night.”

Scott (Mark Schneider, Supervan) wants to be a drag racer. His dad doesn’t want him to be one. Soon, they learn that they can bond by being part of the sport. Scott is also incredibly hard to like. And there’s the movie.

Director Graham Meech-Burkestone only made this one movie. But man, he was all over the place in Hollywood, doing Oliver Reed’s hair for Burnt Offerings and makeup for Day of the Animals, The Manitou and The Exterminator.

“This picture is dedicated to the men and women in drag racing — they are all winners,” says the credits. Nope. This movie is dedicated to my Letterboxd Crown International list. Someday, somehow, I’m going to get 100% that thing.