What can one say about the movie that uses the tagline “It’s cheaper than a chainsaw!”?

Written and co-directed by one-time The Dukes of Hazzard stuntman Terry Lofton (along with Bill Leslie), this movie was inspired by a story that he heard about a nail gun fight at a construction site. While the original script was eighty pages, the final shooting only used twenty-five of those pages and went from a serious film to a sillier tone, as Lofton figured no one would ever take this movie seriously.

At a construction site in east Texas — yay, the theme makes sense — six men assault Linda Jenkins. Months later, a camoflaged killer in a black motorcycle helmet hunts down the men one by one.

This is honestly the only slasher I’ve ever seen where a victim accidentally urinates on the killer, which you think would have had to have happened by now.

Beyond just the men who wronged Linda, the distorted voiced killer is pretty much indiscriminate about who he kills. Usually, it’s people having sex, which seems to happen in every other scene. In fact, the director claims that John Rudder’s wife divorced him over his scene with Shelly York as she believed they were really aardvarking. 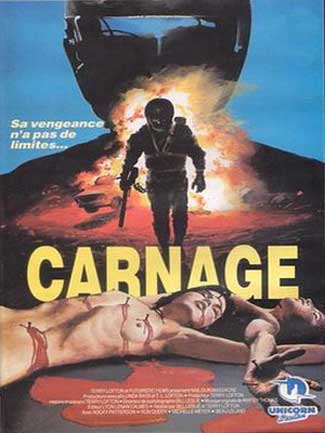 There’s an astounding scene in this where a cashier looks directly at the camera. That’s Lofton’s grandmother, who worked in the store they used for the shoot. She has the script near her — you can see it — and was really upset when she saw the movie and realized how much sex was in it. The violence, as always, is fine. Just don’t have any horizontal mambo, please.

I guess there was construction all over East Texas at this time, which is certainly reflected by this film, which also has a nail gun fight for fun, because why not?

This movie has the longest takes, the most penises, the biggest freakouts, the most Dairy Queen product placement and the strangest synth score I’ve seen in a film. Normally just one of those things would be enough to make me fall in love with a slasher, but somehow, this one manages to get all of those into the same movie.

So yeah. I totally love this one.