You wouldn’t know it from the title, but Bulldog Drummond is back again after Deadlier than the Male. Richard Johnson, Terence Young’s original choice of 007, returned as well. Of never playing Bond, Johnson said to Cinema Retro magazine, “Eventually they offered it to Sean Connery, who was completely wrong for the part. But in getting the wrong man they got the right man, because it turned the thing on its head and he made it funny. And that’s what propelled it to success.”

He’d go on to play Dr. Menard in Zombie, as well as roles in The Comeback, Beyond the Door and the Sergio Martino movies Screamers and The Great Alligator.

The world’s first supersonic commercial plane is having problems, what with killer women like Maria Aitken, Yutte Stensgaard (who replaced Ingrid Pitt in Lust for a Vampire) and Joanna Lumley in an early role (she and Virginia North were both filming On Her Majesty’s Secret Service at the same time — and the very same Pinewood Studios — as this film!) murdering and sabotaging everyone and everything to stop its creation.

It’s a good thing that Bulldog — and his assistant Flicky (Sydne Rome, The Pumaman) — are on the case. The culprit? Carl Petersen (James Villiers, who is in For Your Eyes Only), a rich criminal who stands to get $8 million pounds if his plane isn’t ready by a certain date.

Beyond having two henchwomen named Helga (Daliah Lavi, who was also in The Silencer, Nobody Runs Forever, The Spy With the Cold Nose and Casino Royale) and Pandora (Beba Lončar, who also appears in Jess Franco’s spy film Lucky, the Inscrutable), Petersen has created an army of female robots who can use ultrasonic frequencies to maim and murder.

Of course, Drummond and Helga hook up, but she fails several times to kill him off. Hell, she sleeps with him again after capturing him for Petersen. Everything gets blown up real good though, Flicky ends up being a Russian double agent and Bulldog hooks up with the only fembot who is really human, number 7, who is played by Vanessa Howard (she’s in the Dan Curtis version of The Portrait of Dorian Gray).

Robot number 9 is, of course, the aforementioned Virginia North, forever Vulnavia from The Abominable Dr. Phibes. Another one is Shakira Baksh, who would soon become the wife of Michael Caine.

This is on the good side of Eurospy film. Nothing is all that serious and everything moves quickly. I’d definitely pick this one — and Deadlier than the Male — if you’re looking for a non-Bond spy movie. 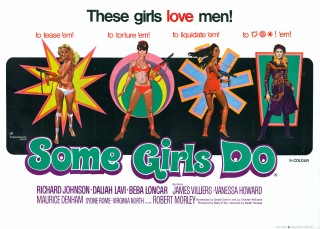