Dr. DeMarco (the ever-job hungry John Carradine) gets fired by the space agency. Not NASA. The space agency. So he does what any of us do when we get downsized. No, he doesn’t develop a case of the shakes and contemplate how to kill himself so his wife can take advantage of his life insurance because he’s failed yet again.

He makes superhuman monsters from the body parts of innocent murder victims that can be controlled by flashlights to the side of the head.

That said, those undead, well, astro zombies get loose and the CIA and an international gang of spies all get mixed up.

This is Wendell Corey’s last film, an ignominious close if I ever saw one.

Wayne Rodgers, who would become a star on M*A*S*H* co-wrote and co-produced this movie, the last time he’d work with Mikels. 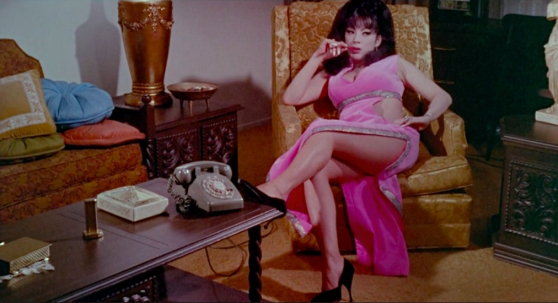 But come on. You’re watching this for Tura Satana. Seriously, of all the women to walk the millions of years on this Earth, there could be only one Tura, the women who studied martial arts so that she could go back and get revenge on the men who assaulted her as a child, like a living and breathing version of They Call Her One Eye.

“I made a vow to myself that I would someday, somehow get even with all of them. They never knew who I was until I told them,” said the goddess herself.

She also survived being shot, breaking her back in a car wreck and a wedding proposal from Elvis Presley. Seriously, my love for Tura Satana knows no boundaries.

She’s why I watched this movie.

As Glenn Danzig once sang in the song “Astro Zombies” — which more people know than probably this movie — “With just a touch of my burning hand, I’m gonna live my life to destroy your world. Prime directive, exterminate the whole fuckin’ race!” The Misfits were the perfect band to convey the junky charms of this film.

You can watch this on Amazon Prime. The Rifftrax version is available on Tubi.