The poster says it all: “The movie that has no limits of evil.” When people talk about grimy, evil pictures, this is the one they’re talking about. Quentin Tarantino called this “the roughest revenge movie ever,” and that’s including I Spit on Your Grave and Last House on the Left, one would suppose. After all, Elle Driver in his Kill Bill directly takes her look from this film, with outfits that match her eyepatch. 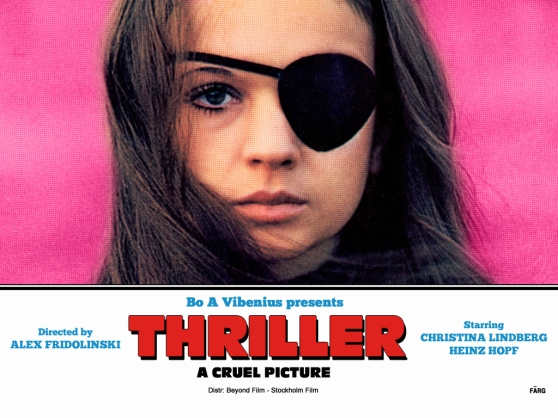 Frigga (Christina Lindberg, Teenage Playthings, Exposed) is a simple farm girl who’s been silent since she was a kid, thanks to being raped. Her loving parents spend all of their money to try and get her voice back with speech therapy. One day, she misses the bus and ends up going on a date with Tony, who seems like a real ladykiller. Turns out he is — he gets her hooked on heroin, telling her that she needs it every 48 hours if she wants to live. To pay him back, she has to become a prostitute for him.

Frigga — possibly named for Odin’s wife (and Odin is one eyed, after all) — cannot be tamed. She escapes twice and scars the face of the first john who tries to sleep with her. As punishment, Tony takes her eye — a scene shot with the cadaver of a young girl who had committed suicide. Remember what I said above — this film takes no fucking prisoners.

Tony has sent a letter home to her parents, telling them she hated them and would never be back. In answer, they both commit suicide. Add in the death of Frigga’s only friend, fellow prostitute Sally, and it’s time for revenge. She starts charging more for whatever her clients want to do to her, all so that on every Monday, she can learn the skills she’ll need to kill everyone and everything.

What follows is a leather overcoat clad Lindberg — a gorgeous creature of pure hatred and violence — destroying everything. Even two cops who try and take her out are decimated in slow motion in a tour de force scene that Rob Zombie could only dream of shooting — sound dropped out, violence given to full display. The film flirts with art while keeping both feet mired in exploitation — there’s a lesbian scene and in some versions, a hardcore insert — but gorgeous shots of police sirens with electronic music droning mark this as just as much masterpiece as masturbatory fodder.

Finally, after killing all of her clients, Frigga challenges Tony to a duel. Getting the better of him, she buries him in a hole, ties a rope around his neck and like some cowboy in a spaghetti western, makes a horse run away, killing him. She watches, mute, as the man who ruined her life finally dies. What can be left after this? She has become Shiiva, Death, the destroyer of worlds. Her family destroyed. Her friend dead. Even the police, who could not help her, dead at her hand. She drives the cop car into the distance, sirens blaring as wind and sound fills the soundtrack.

This isn’t a movie for everybody. But it’s why I love movies — it’s an experience. I can’t recommend it to everyone, but if you’re here and reading this, you know that you’ll probably love it. Heck — you’ve probably already seen it.

Lindberg — who claims herself that she was a horrible actress — goes all in here. She injected water and saline into her veins for the heroin shots. She learned how to fight. Hell, she got arrested after practicing shooting her shotgun — in public no less. She owns the screen in this.

Also, without a doubt, this film has one of the best trailers ever.

“When cruelty knows no bounds. When evil knows no limits. Revenge strikes with its most frightening power. They called her One-Eye…then ran for their lives. They defiled her beauty. They robbed her of speech. They brutalized her body and, when they had finished, she used what was left to repay every blow with her own terrible kind of revenge.”

3 thoughts on “DANGEROUS WOMEN: They Call Her One Eye (1973) AKA Thriller A Cruel Picture”