HBO showed It Came from Hollywood, a movie written by Dana Olsen (Wacko, The ‘Burbs) and directed by Malcolm Leo and Andrew Solt. It’s packed with clips of all manner of strange films, as well as wraparound segments hosted by Dan Aykroyd, John Candy, Gilda Radner, Cheech Marin and Tommy Chong.

So many of the films featured as clips in this movie — trust me, in the early 80’s we couldn’t even afford a VCR, so the opportunity to see any of these movies depended on the whims of what movies would show up on UHF channels — include many films that would impact my life, such as Glen or Glenda, Robot Monster, Creature from the Black Lagoon, The Violent Years, Dragstrip Girl, The Amazing Colossal Man, Plan 9 From Outer Space, The Tingler, The Incredibly Strange Creatures Who Stopped Living and Became Mixed-Up Zombies, Son of Godzilla, A*P*E, The Incredible Melting Man and so many more. Note that many of these movies belong to Ed Wood. We’ll get back to him in a second.

Writers Harry and Michael Medved worked as consultants on this film, which leads me to the next experience: their books. I was gifted these by my uncle, who recognized my love of horror movies and would use his job as a librarian to find me books to read about the movies that I loved so much, such as the legendary orange cover hardback Crestwood Monsters series.

Again, in the pre-internet days, writers like the Medveds were the only ones who you could find writing about strange movies and most of what they said about them colored the perceptions that people will always have. In fact, in the first of their books, the aforementioned The Golden Turkey Awards, they voted Ed Wood as the worst director of all time. The worst film, as written in by their readers, was his Plan 9 From Outer Space (the runner-up was another of my favorites that the world hates, Exorcist II: The Heretic).

The second book, The Fifty Worst Films of All Time, contains many films that I’d also grow to love for their own merits that the rest of the world seemed to ignore, such as Airport 1975, Bring Me the Head of Alfredo Garcia!, Godzilla vs. the Smog Monster, The Horror of Party Beach, Jonathan Livingston Seagull, The Last Movie, The Story of Mankind and Valley of the Dolls.

As I read these books, I started to realize that perhaps the Medveds didn’t know everything about movies. When Michael Medved and Jeffrey Lyons replaced Siskel and Ebert on Sneak Previews in 1984, I realized that my suspicions were correct. That’s when I started re-evaluating these films.

That’s when I learned that Ed Wood was pretty great.

Bride of the Monster is considered to have the biggest budget that Wood ever enjoyed — $70,000 or $678,000 in today’s cash. That money came from a rancher named Donald McCoy, who became the film’s de facto producer. He had two demands: his son Tony would play the film’s hero, Lieutenant Dick Craig. And the movie had to end with an atomic explosion.

The final film, which originally premiered under the title Bride of the Atom, was released through a deal with Samuel Z. Arkoff, who made more money off the movie than Wood. Enough, in fact, to fund American International Pictures.

This movie would also mark the final speaking role for Bela Lugosi. It’s nearly a sequel to The Corpse Vanishes and finds Lugosi recreating the hypnotic stare that he’d used in previous movies like Dracula and White Zombie.

The Golden Turkey Awards claims that Lugosi’s failing health/mental faculties — or Wood’s incompetence as a director — led to him telling the Lobo character that he is “as harmless as a kitchen.” The truth is that Lugosi says the line correctly: “Don’t be afraid of Lobo; he’s as gentle as a kitten.” Sadly, again, the Medveds’ version of reality is what has stuck with us.

Bela’s speech in this movie reveals the darkness and pathos in his soul. I’m always reminded of it and how it must have felt to recite: “Home? I have no home. Hunted, despised, living like an animal! The jungle is my home. But I will show the world that I can be its master! I will perfect my own race of people. A race of atomic supermen which will conquer the world!” 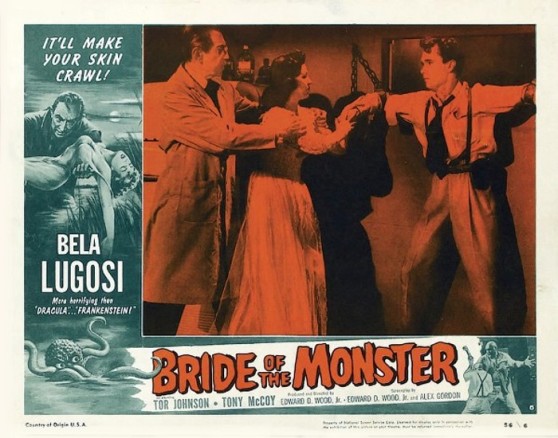 The film begins in the woods, where two hunters try to hide from a rainstorm in the Willows House, where Dr. Eric Vornoff uses an octopus — urban legend states that it was stolen from the Republic Pictures lot and the John Wayne film Wake of the Red Witch — and his manservant Lobo (former pro wrestler Tor Johnson) to kill both of them. Well, after he experiments on one of them, of course.

We cut to a police station, where the police discuss twelve recent murders that all feel connected. This is also the opportunity to meet our heroes: Captain Tom Robbins (Harvey B. Dunn, Teenagers from Outer Space), Lieutenant Dick Craig (the son of the producer, as mentioned earlier), Janet Lawton (Loretta King; according to actress Dolores Fuller, who usually had the lead in Wood’s films, she offered to help finance the movie if given this role. However, Loretta denied this.) and Professor Vladimir Strowski. In this scene, there are also cameos by a drunk (Ben Frommer, who was Count Bloodcount in Transylvania 6-5000) and a newspaper seller (William Benedict, Whitey of The Bowery Boys).

Janet decides to take off for the house herself to investigate and is soon captured and transformed into, well, a Bride of the Monster. It takes Lobo — who ends up having a heart — to stop the experiments and sham marriage, allowing our heroine to escape and Lugosi’s character to gain superhuman atomic powers, powers that end up finding him battling that octopus, his home being destroyed by a strike of lightning and a nuclear blast wiping him off the face of the Earth.

After all, as the movie reminds us, he “tampered in God’s domain.”

Paul Marco shows up in this film as a goofball cop named Kelton. He’d play the same role in Plan 9 from Outer Space and Bride of the Monster‘s spiritual sequel, Night of the Ghouls. Thought to be a lost film until Ed Wood fan Wade Williams discovered that the film was sitting in a lab, held hostage due to its bills never being paid. It was released to home video in 1984 and also has Johnson returning as Lobo. Johnson would also play a character with the same name in The Unearthly.

You can watch this on Amazon Prime with or without Mystery Science Theater 3000 riffing on the movie.