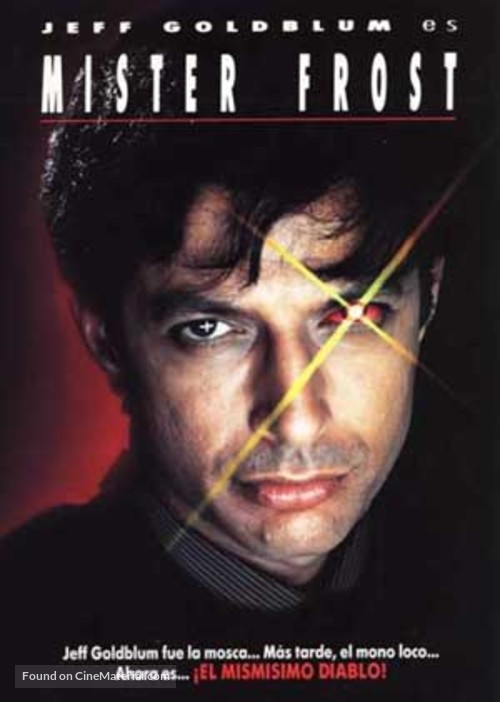 As you may know, I love lost films or movies that no one pays attention to any longer. Can you believe that I found one from 1990 with Jeff Goldblum in it? How does that happen?

Alan Bates (The Shout, The Wicked Lady) plays Felix Detweiler, a detective that starts the film by arresting the titular Mister Frost (Goldblum), who happily announces that he has all manner of bodies buried on his property.

Frost is arrested and goes to an insane asylum, where he doesn’t speak for two years. His identity can’t be figured out and Detweiler becomes obsessed by the case and the twenty four bodies they found at Frost’s home.

Frost finally speaks when he meets Dr. Sarah Day (Kathy Baker, The Right Stuff), telling her that he refuses to talk to anyone but her. Also, he’s Satan. Also also, he plans on getting her to murder him someday.

Detweiler, for one, is convinced that Frost really could be the devil. He might be right — Frost can do crazy things, like heal Day’s brother so that he can walk for the first time in years. Also, her patients and fellow doctors are being changed by Frost and not for the better.

To keep anyone else from Frost’s powers, Day agrees to kill him. He thanks her for believing in him, telling her that he’s now more powerful than anything or anyone in the world. Day shoots him mid-speech, yet finishes his last sentence in Frost’s voice. Now, she too refuses to speak.

It’s not a great movie, but it’s a fun one. And it’s not one you’re going to find easy — well, YouTube is your friend here — but one that you won’t be upset that you sat through. Goldblum as the devil? Yeah, I can see it.