I read a review of this movie that really talked down on it, describing it as a “sleazy TV movie-of-the-week punctuated with gory murder scenes.” That’s positive ink in my neck of the woods, so of course I hunted this down. It’s the first movie that Jennifer Jason Lee — the daughter of Vic Morrow — was ever in.

It’s also a Ken Wiederhorn film, the guy who brought you stand-outs like Shock Waves, Return of the Living Dead Part II and Meatballs II, not to mention the never on DVD movie Dark Tower.

A rapist and murderer has the modus operati of stalking and calling his victims before he takes them out. Now, TV reporter Jane is on the case, feeling like the killer could be a next-door neighbor. She’s played by Braddock, PA’s (the adoptive home of Martin, of course) Lauren Tewes, who was Julie McCoy on The Love Boat.

The film was planned as a straight-forward mystery before the slasher boom took off. So to get to the blood and gore quotient required, they hired Tom Savini to do the special effects. However, the grisly visions he conjured could never get an R rating, so most of his work was exorcised from the film. That said — the 2007 DVD release of the film has an uncut version.

While it’s never explained, Jennifer Jason Leigh’s character is deaf, blind and mute, perhaps the result of a past assault. When the killer targets her in the last ten minutes, the film really picks up the pace.

If you’re wondering how Siskel and Ebert felt… 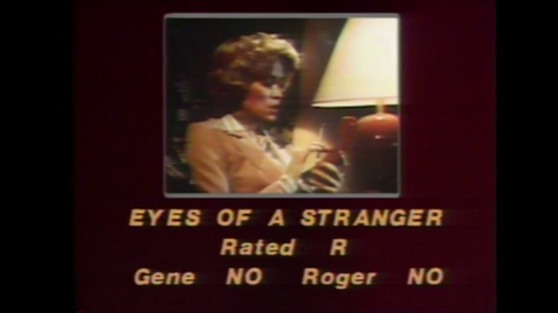