As much as we decry practical effects over CGI — in the same way we demand physical media over streaming — there are times when it doesn’t have to be all that bad. I decided that instead of finding a poor example of computer generated animation, I’d share something that I love.

While the first CGI in mainstream film was probably 1976’s Futureworld (several modern techniques were innovated in this film, from an animated CGI  hand that was taken from Edwin Catmull’s 1972 experimental short subject A Computer Animated Hand and an animated face from Fred Parke’s 1974 experimental short subject Faces & Body Parts to an early example of digital compositing to place live actors over a previously filmed background), the two movies that I can really remember to use extensive computer-generated imagery were Tron and The Last Starfighter.

In place of physical spaceships, 3D rendered models were used to depict this film’s Gunstar and spacecraft. Their designs came from artist Ron Cobb, who also worked on Dark Star, Alien, Star Wars, Conan the Barbarian and wrote the initial script for Dark Skies, which Steven Spielberg rewrote into the mich friendlier E.T. He’s also listed in the credits for Back to the Future as DeLorean Time Travel Consultant.

There are over 27 minutes of effects in this film, which was a tremendous amount of computer animation for its time. However, this animation required half the time of the traditional miniature special effects, allowed the film to be made for just $14 million dollars.

That said — there are still plenty of practical effects, like the creature and Beta Unit special makeup, as well as the Centauri’s Starcar, which was a real vehicle created by Gene Winfield, who also created the spinners for Blade Runner and the 6000 SUX for RoboCop. His car design for The Reactor was used in a variety of TV shows, including Catwoman’s Catmobile on the Batman TV show, the Jupiter 6 car in the “Bread and Circuses” episode of Star Trek, Bewitched and Mission: Impossible, where it was part of a scheme to make a bank robber believe that they’d been asleep for 14 years.

The idea that video games were recruiting players for some high end military service started as an urban legend that games like Missile Command were saving information on its players so that they’d be ready to defend America from the inevitable Russian ICBM strike that was coming in the 1980’s. There was also the There’s also the weird tale of Polybius, a video game that never existed — or did it? — that was an MK Ultra style experiment unleashed on Portland, Oregon arcades that led to addiction, hallucinations and visits by the Men in Black. Obviously, those legends led to this film or this is all an elaborate piece of disinformation to hide the truth in plain site. I leave your version of reality up to you, dear reader.

Alex Rogan (Lance Guest, Halloween 2) is going nowhere, stuck in a trailer park taking care of everyone else. His scholarship has been rejected and he has to keep fixing things and watching his little brother instead of getting to spend time with Maggie (Catherine Marie Stewart, The Apple).

The only fun he has is playing the Starfighter arcade game in the trailer park, which allows him to pretend that he’s defending the Frontier from Xur and his Ko-Dan Armada.

After Alex becomes the game’s highest-scoring player, the game’s inventor Centauri visits, offering him a ride in his fancy car as a prize. He’s played by Robert Preston, who is really just reprising his role as Harold Hill from The Music Man, which is an ingenious gambit.

The car is really a spaceship and Alex is taken to meet the Rylan Star League while a Beta Unit is used to replace him on Earth. That’s when he learns that the game is actually a training unit meant to find starfighters ready to battle very real Ko-Dan Empire.

Alex is expected to be the gunner for the Gunstar along with the reptilian navigator Grig (Dan O’Herlihy, who pretty much owned the 1980’s between this movie, playing Conal Cochran in Halloween 3: Season of the Witch and the Old Man in RoboCop). However, all our hero wants to do is go home.

It takes alien assassins attacking the trailer park and the death of all of the other starfighters and Centauri — who takes a laser blast meant for our hero — for Alex to join the cause. While he fights the Armada in space, Beta and Maggie battle the Zando-Zan killers back down on good old Mother Earth.

Of course, Alex has the gift that all great starfighters need and saves the day. He lands his ship on the trailer park and takes Maggie into space with him, while his brother starts playing the game in the hopes of joining his brother.

This is a film with real heart, beyond its aspirations of being a blockbuster. It’s directed by Nick Castle, who you probably already know played Michael Myers in the original Halloween. What you may not know is that he wrote the movie Skatetown U.S.A. or directed Tag: The Assassination Game, The Boy Who Could Fly and Dennis the Menace. Plus, he, John Carpenter and Tommy Lee Wallace all formed The Coup De Villes and played much of the music for Big Trouble In Little China.

Despite the film being based on the idea of an arcade game, there never really was one despite the promise in the closing credits of an Atari created edition. The game was actually started and would have been Atari’s first 3D polygonal arcade game to use a Motorola 68000 as the CPU. It would have used the Star Wars arcade controls and been much like the game Lance Guest plays in the film, but it was cancelled once Atari representatives saw the film in post-production and decided it was not going to be a financial success.That said there were Atari home versions in development and they were eventually released as Star Raiders II and Solaris.

There is an NES game — it’s a reskin of the computer game Uridium — and Rogue Synapse created a freeware PC game in 2007 that’s very close to the game in the film.

The themes of The Last Starfighter have been repeated in plenty of other stories, like Orson Scott Card’s Ender’s Game and Ernest Cline’s Armada, which is pretty much a note for note reboot of the same story. Of course, Cline wrote Ready: Player One and works in a reference to the original film, but he wears his influences on his sleeve. Interestingly enough, Wil Wheaton read the audio version of this book — which will be a movie soon enough that’ll cost a hundred times what The Last Starfighter did and have a sliver of the soul — and he appears in this film. 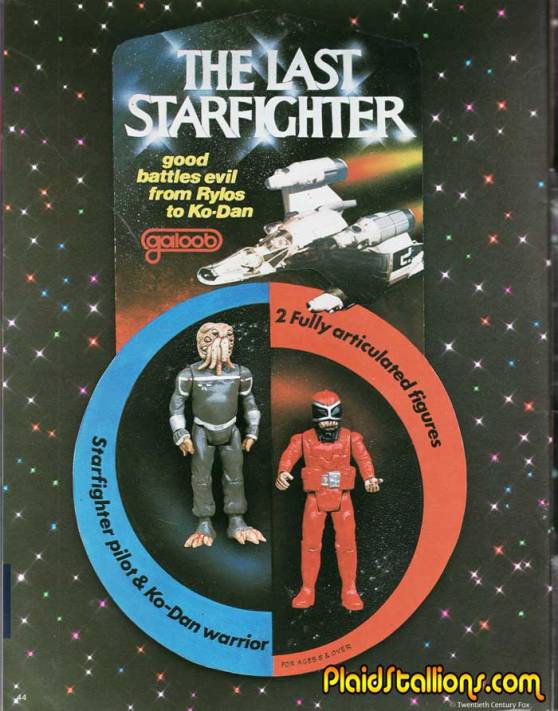 Galoob planned to create a toyline for this movie that sadly never came to be. You can see images of it and learn more about it at Plaid Stallions.

If you’re looking for a great slice of 1984, you can’t go wrong with this movie. I love that it has a lizard best friend, fun spaceship designs, the Music Man conning people for money in the midst of a galactic war and even the promise of a sequel which never came. It’s the kind of movie that would always be a rental that everyone could agree on or the perfect film to veg out whenever HBO showed it for the two hundredth time.