When I was a kid, I wasn’t allowed to have toy guns and military toys were not allowed in our house. I can remember thinking how strange it was that my grandfather loved war movies so much, hearing him listen to screaming and bullets and explosions in films late into the night when he’d get home from a double shift at the mill. And yet here I am, thirty years later or so, pretty much doing the same thing, watching Stallone movies at 6:12 AM while the rest of the world enjoys their last few minutes of sleep.

The first time I saw Rambo III was at a friend’s house unbeknownst to my parents. And this kid was obsessed with Rambo, right down to the necklace and knife that had a compass and opened up to hold tools. Yeah, 1988 was the kind of time when kids idolized war movies. We didn’t know that war was a funny thing and that the very Taliban soldiers that we cheered on in this film would one day change sides because global diplomacy is funny that way. It was simpler to just hate and fear Russia back then than it is today, where nothing at all seems sure and everything feels made up.

But I digress. Let’s talk about John Rambo.

Colonel Sam Trautman tracks down Rambo in Thailand, where he’s stick fighting for a monastery. He wants nothing of the war, even when shown how Russian troops in Afghanistan are killing civilians. Trautman goes on the mission and is captured, with all of his men killed. That’s when Rambo tells the man in charge of this op, government suit Robert Griggs, that he’ll rescue Trautman.

That leads me to one of my many rules of movies. This one is simple. Never trust a government spook. And my second rule: never, ever trust Kurtwood Smith.

Rambo soon meets arms dealer Mousa Ghani and asks him to bring him to Khost, where Trautman is being held. The Mujahideen in the village take to Rambo after he plays a game on horseback with them, but after a Russian helicopter attacks them, they refuse to help him. Instead, only Mousa and a young boy named Hamid are willing to help.

Rambo — of course — destroys everyone in his path to save his mentor. He uses everything from his bare hands to explosive arrows and even a tank to kill everyone in his path. And while the Russians almost take them out, the brave Afghani people rise up to rescue our heroes.

This movie used to end with a dedication to the brave Mujahideen, but now just thanks the gallant people of Afghanistan. That said, Masoud is based on Ahmad Shah Masoud, a real-life Afghan resistance who later became the minister of defense before leading the resistance against the Taliban. And in the original cut, Rambo felt so at home with the freedom fighters that he stayed here versus going back to America. 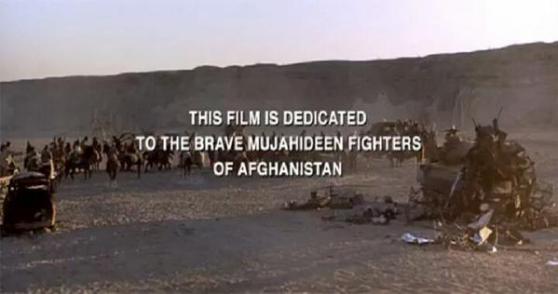 Up until Back to the Future Part II, this was the most expensive movie ever made. And, like many Stallone films, it was fraught with issues. Just a few weeks into filming, most of the crew including the director of photography and director Russel Mulcahy (Razorback, Highlander) were fired.

Stallone told Ain’t It Cool News that Mulcahy “went to Israel two weeks before me with the task of casting two dozen vicious looking Russian troops. These men were supposed to make your blood run cold. When I arrived on the set, what I saw was two dozen blond, blue-eyed pretty boys that resembled rejects from a surfing contest. Needless to say, Rambo is not afraid of a little competition but being attacked by third rate male models could be an enemy that could overwhelm him. I explained my disappointment to Russell and he totally disagreed, so I asked him and his chiffon army to move on.” Mulcahy was replaced by Peter MacDonald, a veteran second unit director.

The Guinness Book of World Records went on to label this the most violent film ever made, with 221 acts of violence, 70 explosions and over 108 on-screen deaths. They should have held on for the next one in the series, which goes way beyond this. Of course, this won Stallone another Razzie for Worst Actor, but I don’t think he was all that concerned. After all, he got paid a Gulfstream jet to be in this movie.