Written by, directed by and starring Sylvester Stallone, this movie rode the crest of Reagan era jingoistic fervor to a $300 million dollar box office. The actual story is pretty much non-existent, as it only concerns two boxing matches and several montages. That said, it’s the kind of movie that makes me want to scream my head off and cheer. In spite of how silly it all seems, it does it’s job so very well.

Captain Ivan Drago (Dolph Lundgren) is the perfect Soviet athlete, more killing machine than boxer who has been trained to never lose. Along with a team of trainers, his Olympian swimmer wife Ludmilla (Brigitte Nielsen) and manager Nicolai Koloff (Michael Pataki!), his goal is to prove the supremacy of the Soviet athlete.

To do that, he wants a match with Rocky Balboa, but the champ doesn’t want it. Instead, his former rival and best friend Apollo Creed (Carl Weathers) takes the match, as much to prove to himself he can still fight as his patriotism is threatened by Russia’s boasts.

Their fight is incredible. Drago simply walks to the ring while Apollo has live entrance music from James Brown, who tears through “Living in America” with a team of showgirls. Yet soon, the MGM Grand in Las Vegas is quieted as Drago absolutely tears Apollo apart. Rocky and Apollo’s trainer Duke (Larry Burton, who was in Assault on Precinct 13 and played Larry Durkin, the garage owner in The Shining) beg their friend to throw in the towel, but he tells them to not stop the match no matter what. Drago hits him with one more punch that literally kills him, before he tells the assembled media, “If he dies, he dies.”

Now Rocky wants that match. The Russians agree to an unsanctioned 15-round fight in the Soviet Union on Christmas Day (to protect Drago from the threats of violence he has been getting in the U.S.), so Rocky tells his wife he must leave her behind. Now, it’s all about the fight as he goes to Krasnogourbinsk with Duke and his brother-in-law Paulie (Burt Young, who of course I’ll always love from Amityville II: The Possession).

The montage where Rocky trains in the snow, while Drago works out in a high tech gym, is the kind of thing that never happens in film anymore. It’s completely ridiculous, yet ai love every single minute of it. Drago is getting shot up with steroids while Rocky helps Russian farmers lift their sleds in the snow. It does bring a tear to one’s eye.

Finally, we arrive at the big battle, with Rocky’s wife Adrian (Talia Shire) even coming to Russia. Of course Rocky wins — “He is not human. He is made of iron.” — but you knew that coming in. The end, with Rocky telling a crowd of Russians that he has won over that, “If I can change, and you can change, then everybody can change!” makes me jump up and down nearly thirty-five years after its release.

That fight scene at the end looks so good because, well, it’s real. Or at least Stallone says they are. He wanted realism and Lundgren agreed that they would legitimately spar. One brutal punch to Stallone’s chest later and his heart slammed against his breastbone and swelled up, sending him into intensive care for eight days. Lundgren also punched Carl Weathers so hard that he walked off the set and didn’t return for four days.

While Rocky trained in a cabin (inspiring Olympians Michael Phelps and Ryan Locht), the high-tech equipment Drago uses is real and was around twenty years away from being publically used.

Speaking of high-tech, the real star of the film is SICO, the robot who played Paulie’s gift. That scene — where he sings “Happy birthday Paulie!” — is perhaps one of my top ten moments in all cinema. It’s so at odds with the rest of the movie that I can’t help but love it. It actually is in there for a great reason, the International Robotics Inc. creation — featuring the voice of the company’s CEO Robert Doornick — was written into the movie after it had been used to help treat Stallone’s autistic son, Seargeoh. 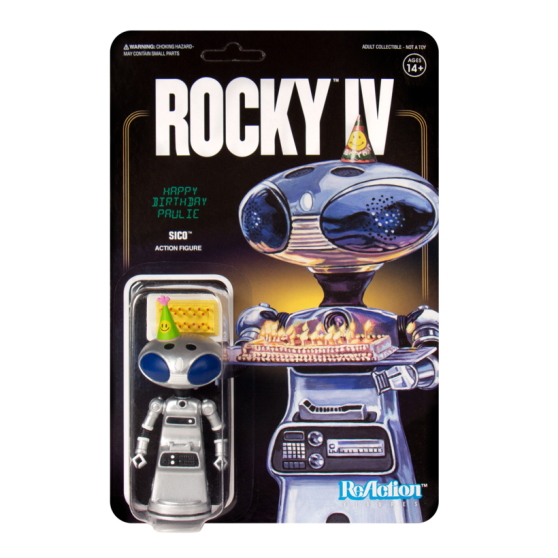 Super 7 makes the best toys. Get this at https://super7.com/products/rocky-reaction-figure-paulies-robot

Stallone’s original plan was for Rocky V to be about the downward spiral that both Rocky and Drago would travel after this fight, with the Russian returning home in disgrace before becoming addicted to alcohol and steroids, then committing suicide. That never happened, although Creed II is all about the fight between Apollo and Drago’s sons, with Lundgren returning to play his famous role.

This movie was also part of a famous copyright lawsuit, Anderson v. Stallone. Timothy Anderson developed a treatment for Rocky IV on spec. After the studio didn’t purchase it, the movie ended up very close to his treatment. The decision was that Anderson had “prepared an unauthorized derivative work of the characters Stallone had developed in Rocky I through III, and thus he could not enforce his unauthorized story extension against the owner of the character’s copyrights.”

There was even a special trailer made for this film with Drago telling the audience how he would defeat Rocky. If you don’t want to watch this movie after this scene, I have no idea what is wrong with you.