It takes a certain kind of genius — or maniac — to make a gore drenched version of Brigadoon. I was explaining this movie to someone and said that the main reason why I like it so much is the completely joyful way in which the townsfolk of Pleasant Valley go about their murderous rampage. This is the time of their lives — well, post-death lives — and it’s worth hollering and singing and shouting about.

Shot over two weeks in the small Florida town of St. Cloud — not yet a cog in the omnipotent wheel of the Disney vacation empire yet — and featuring the gleeful participation of nearly every citizen in that sleepy community, this movie established the danger of the South to North audiences, a theme that would reach its creative apex in Tobe Hooper’s The Texas Chainsaw Massacre.

Yankee tourists, made up of the Millers, the Wells and unmarried folks Tom White and Terry Adams (Lewis’ muse, if he ever had one and only because he never sliced off one of her limbs or cut out her tongue, Connie Mason) have followed the detours to Pleasant Valley where they’re the guests of honor for the centennial celebration.

Yes, a hundred years ago, the Union troops marched through the town and killed every man, woman and child. What a thing to celebrate!

The town’s mayor, Joseph Buckman (Taalkeus Blank, who used the name Jeffery Allen, could do such a Southern accent that Lewis would also use him in Moonshine Mountain, This Stuff’ll Kill Ya! and Year of the Yahoo!), and the townspeople show everyone great hospitality at first, but before you can say Mason-Dixon Line they’re slicing off their guests body parts, drawing and quartering them, getting rolled down the hill in a nail-filled barrel, having rocks dropped on them and all other manner of grisly crowd pleasing hijinks.

After kidnapping little Billy, Terry and Tom make it out of town and come back with the police, only to discover that the town never existed. When they leave, the townspeople return and wonder what the world will be like when they come back in 2065 before disappearing into the fog.

This was Lewis’ favorites of his films and he even published a tie-in paperback version of the story. 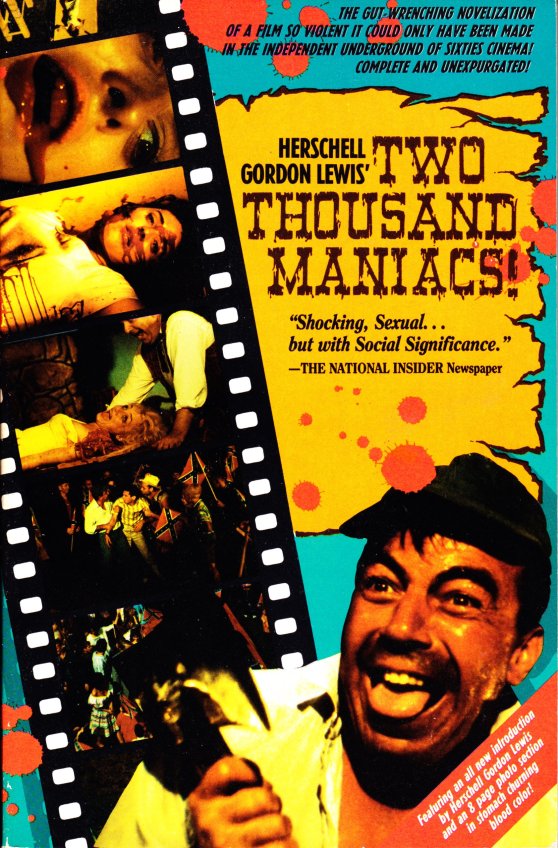 Yes, that’s Herschell Gordon Lewis singing the theme song, too. You have to admire his dedication to filmmaking. This was produced by David F. Friedman, who met up with Kroger Babb before a career that has everything from nudie cuties and roughies to gore and Naziploitation, which he produced under the name Herman Traeger.

More movies should be like Two Thousand Maniacs!, but so few have the gumption to even try.