Jean-Claude Camille François van Varenberg was born on October 18, 1960 but would not become Jean-Claude Van Damme before he went through a childhood filled with bullying. He began studying martial arts at the age of ten.

He started in Shōtōkan karate school, earning his black belt at the age of 18, by which point he had already embarked on a career in competitive karate. He also started ballet, which he studied for five years, as well as Taekwondo and Muay Thai.

Before retiring from competition, JCVD amassed an 18-1 record and was also awarded the bodybuilding title of Mr. Belgium. In case you wonder where he got the name of the Muscles from Brussels from, now you know.

In 1979, he had an uncredited role in André Delvaux’s Woman Between Wolf and Dog, but would not appear in another film until he was an extra in Breakin’ after he and childhood friend Michael Qissi moved to America. Despite working with his friend Chuck Norris on some films and briefly working on the set of Predator, Van Damme had difficulty breaking in to movies. 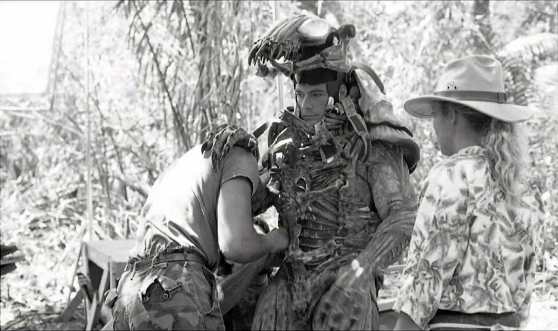 In 1986, Van Damme spotted — perhaps hunted down is the right word — Menahem Golan, half of the Israeli producing team behind Cannon Films. Van Damme was a waiter, so he took a bowl of soup to the producer while doing one of his trademark roundhouse kicks. Even though he did his split at the audition, he didn’t impress Golan until he learned that Van Damme was in Predator. Somehow, his name had not been removed from the cast sheet, so that was all it took to get him cast in Bloodsport.

That’s when Van Damme got on the road to success, making movie after movie after movie. At the height of his fame — after the success of Timecop — Van Damme was offered a three-picture deal for $12 million a movie. He demanded the same amount as Jim Carrey and ended up blacklisted from Hollywood. “I wanted to play the system. Like an idiot. Ridiculous,” he later said to The Guardian. The joke’s on everyone else — JCVD hasn’t stopped being in movies.

We could dwell on his later year issues, his multiple romances and his bouts with depression and drugs. But we’re here to celebrate Jean-Claude. After watching more than twenty of his movies in one week, I’ve learned a few things about not only Jean-Claude Van Damme, but life itself.

1. A good part of every movie opens by explaining why Jean-Claude Van Damme’s character is French. Other than movies like No Retreat, No Surrender and Black Eagle, where Van Damme plays Russian heavies, there is always a lengthy sequence that explains that Jean-Claude is either Candian, from New Orleans or French. Seriously. In Universal Soldier, he’s Luc Deveraux from Louisiana. Maximum Risk, he’s French cop Alain Moreau. Lionheart? Lyon Gaultier, member of the French Foreign Legion. Unlike contemporary Arnold Schwarzenegger, who just ignored his accent, in each of his movies, Jean-Claude takes the time to explain it to us. 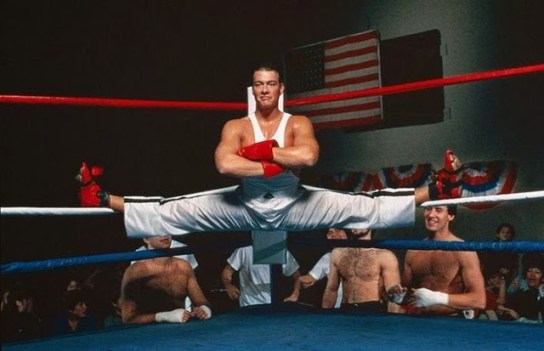 2. He can do splits. In nearly every one of his early films, Van Damme did a split. He does seven in Bloodsport alone. That’s what led Volvo to get Van Damme to be in their epic split commercial, where the action film hero did the split with each foot on the outer rearview mirrors of one semi-trailer truck and one box truck moving backward. The video quickly reached 35 million views in just one week. My favorite JCVD split? Timecop.

3. He frequently has a twin brother. Yes, every actor ends up playing twin brothers at some point of another. Van Damme has done it three times: Double Impact, Replicant (clones count) and Maximum Risk.

4. People frequently get doused with gasoline and set on fire in his films. Don’t believe me? Lionheart starts with Van Damme’s brother getting doused with gasoline and set on fire. Numerous people get killed this way in Death Warrant. Van Damme himself sets a double agent on fire in Sudden Death. His world is rough and violent. That means that often, people must burn. 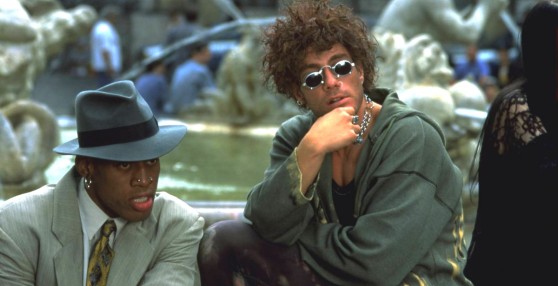 5. He often has a black friend that helps him out. In Kickboxer, Winston Taylor helps our hero save his brother and find a Muay Thai trainer. In Death Warrant, he has two black friends, Priest and Hawkins, played by TV’s Benson, Robert Guillaume. He has Joshua in Lionheart. And in Double Team, he gets the greatest of all of his friends, weapons dealer Yaz, played by basketball superstar Dennis Rodman. 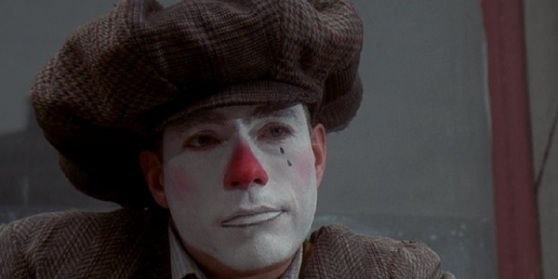 6. He wears some insane costumes at times. Not to be outdone by that ensemble posted above with the fake dreads, but Van Damme dresses as a clown on stilts and an old man within the first five minutes of The Quest. And his hairstyle as Edward “the Torch” Garrotte in Replicant must be seen to be believed.

7. He shows off his ass in nearly every movie. Starting with Bloodsport, Van Damme would feature his backside in nude or near nude form in almost every movie. Director Sheldon Lettich says that these scenes “became a very memorable moment for the ladies in the audience, and for the gay guys as well. Showing off his butt (clothed or unclothed) almost became a signature trademark of his after that.”

8. He sure has killed a lot of people on film. Thanks to the amazing Benjamin Combes, here’s a kill count for JCVD through 2015. Spoiler warning: his kill count is 393.

9. He often goes AWOL. Another central theme in his movies is often his character leaving behind the military so that he can seek personal vengeance. In Bloodsport, Frank Dux goes AWOL so that he may fight in Kumite, just like how in Lionheart he abandons his French Foreign Legion post to get revenge on his parents. And in Universal Soldier, once he regains his memories, he walks away from his fellow soldiers to return to his hometown.

10. If you’re a Hong Kong director, your first Western film must be with Van Damme. Think I’m making this up? Corey Yuen’s first American movie was No Retreat, No Surrender. Ringo Lam? He made three films with JCVD, debuting in the West with Maximum Risk. John Woo? Hard Target. Tsui Hark made only two American movies — Double Team and Knock Off. This all has to be more than just a simple coincidence.

After a week of multiple Van Damme movies, I feel qualified to tell you my ten favorites. If I missed one of yours or you have a list of your own, let me know! 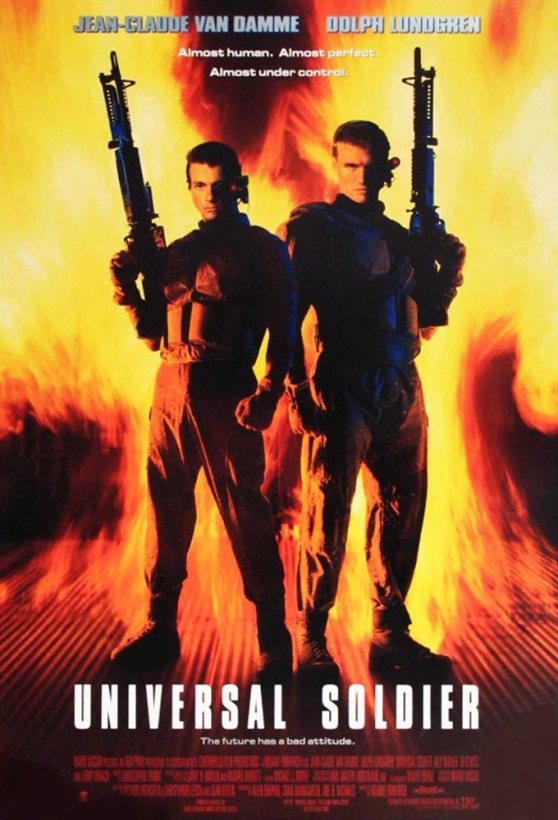 1. Universal Soldier: If a movie where a cyborg zombie Van Damme battling an undead commando Dolph Lundgren doesn’t make you realize that God exists and loves us, well, you’re going to be an atheist for life. 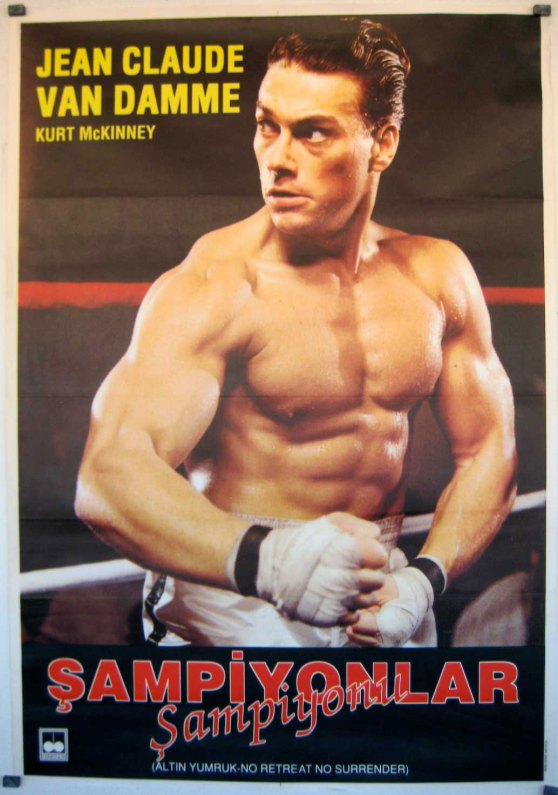 2. Kickboxer: This movie gets it right. The audience for a Van Damme film doesn’t really want romance or character development. It wants to see him fight the worst people to ever walk the face of the Earth and then kick their asses in slow motion. This movie delivers. 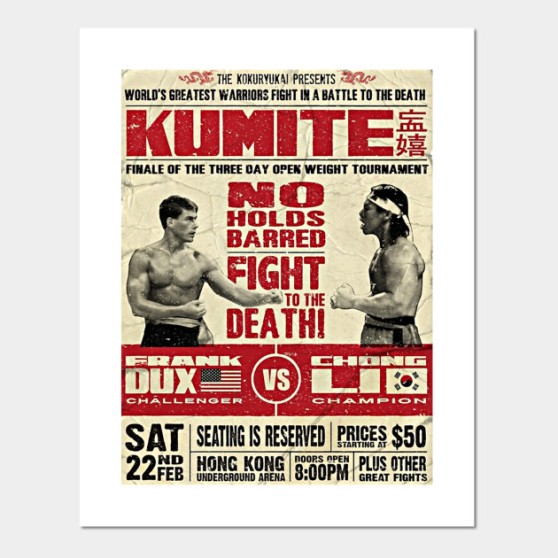 3. Bloodsport: If you liked a movie about a fight to the death, then you’re going to love an entire movie all about that. We wouldn’t have the Mortal Kombat video game character Johnny Cage without this film. 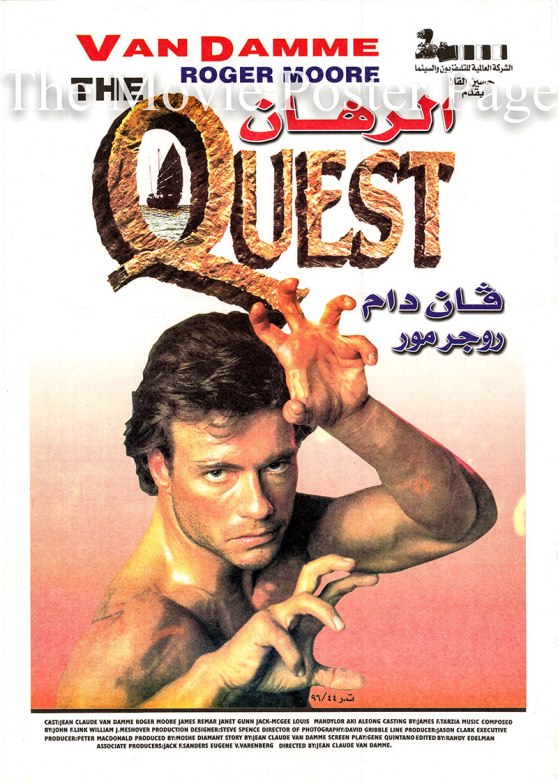 4. The Quest: You gotta give Van Damme credit. He knows the right well to keep going back to. Karate fights. Many, many karate fights. A tournament, you say? Sure, let’s do that again. The fact that Van Damme is a clown on stilts in the beginning is just the icing on this very sugary cake. 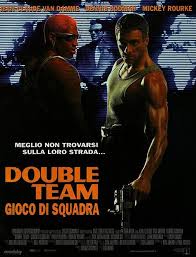 5. Double Team: Van Damme. Rodman. The late 1990’s were a wild time to be alive, where movies like this somehow got made and no one really questioned logic. The cocaine helped. Also: Mickey Rourke plays a bad guy who brings a man-eating tiger with him to devour Van Damme’s infant son. 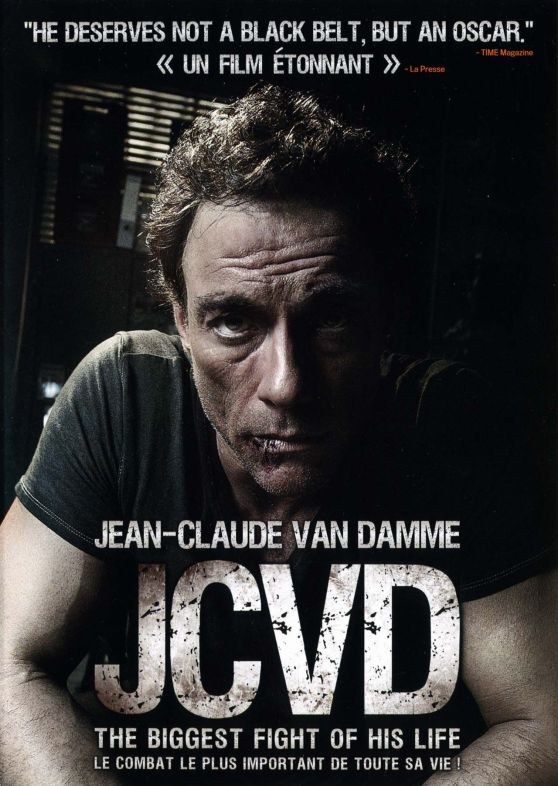 6. JCVD: If you’re looking for the best made movie on this list, you’ve found it. There are no splits or fancy kicks — except in dream sequences. This hits a bit too close to home when you study the actor’s later years, but it’s amazing that he’s able to be this open. 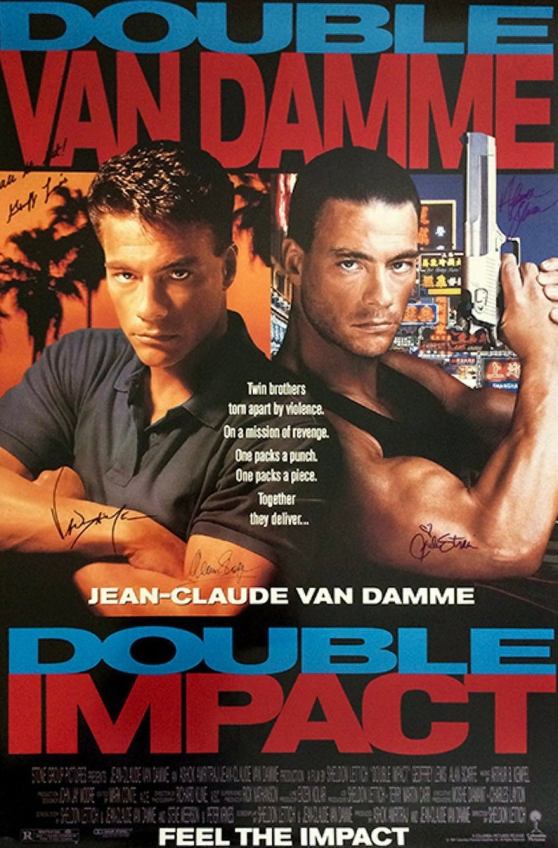 7. Double Impact: In the opening of this film, a dying mother asks Bolo Yeung what will happen to her children once she’s gone. “You won’t be around to see it,” he answers before shooting her point blank. Twin Van Dammes. Thick thighed female assassins. An epic split sequence in a karate studio. When they say, “this one has it all,” they’re talking about this movie. 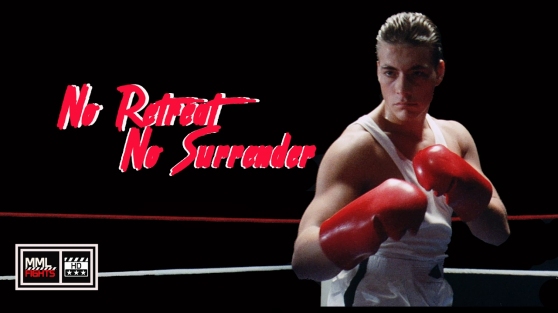 8. No Retreat, No Surrender: Van Damme makes for an astounding bad guy in this film, so much so that he becomes a good guy because you love watching him fight an entire building — all by himself — and nearly win. 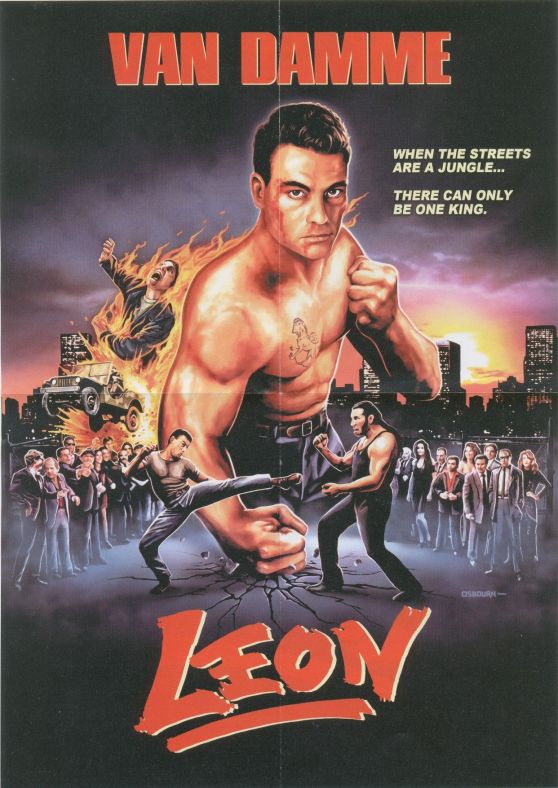 9. Lionheart: What if Van Damme deserted his post in the French Foreign Legion and came back to avenge his brother who got set on fire — fulfilling so many of the Van Damme tropes — and then kicked ass from coast to coast? Then you’d have this movie. 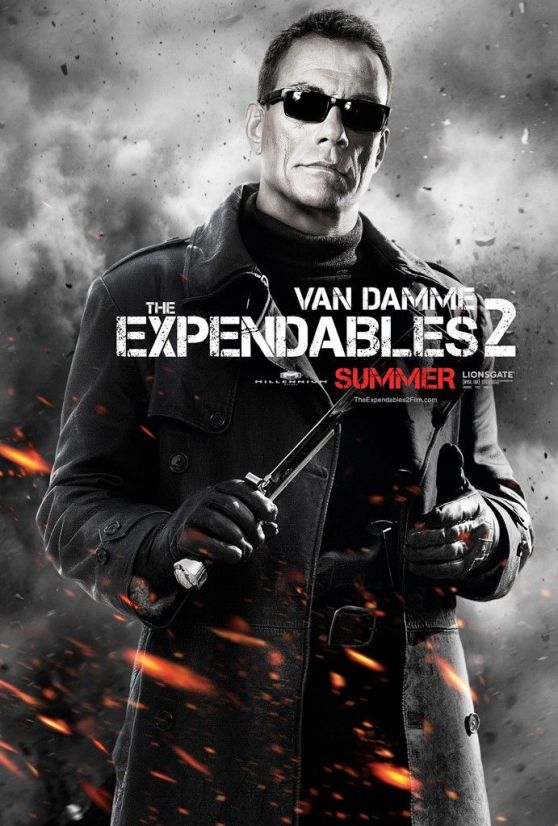 10. The Expendables 2: Finally, after years of wanting to see Van Damme and Stallone fight, this is the movie where it happens. Van Damme’s Jean Vilain is exactly what this franchise was missing in its first iteration — an antagonist just as capable and tough as the heroes. If I had it my way, Van Damme’s character would have escaped and we’d get fifty more of these movies.

I also totally didn’t put Street Fighter on this list and I’m a total fool. That movie has Van Damme fight Raul Julia! You can see all of the Van Damme films I’m Van Dammage myself with on our Letterboxd list.

Finally, if you don’t like Jean-Claude, I have one simple thing to say.

He has his own statue.

Yes, that’s right. JCVD was honored with a life-size statue of himself in his hometown of Brussels. He was moved by this, saying “Belgium is paying me back something, but really it’s to pay back to the dream. So when people come by here, it is not Jean-Claude Van Damme but it’s a guy from the street who believed in something. I want the statue to represent that.” 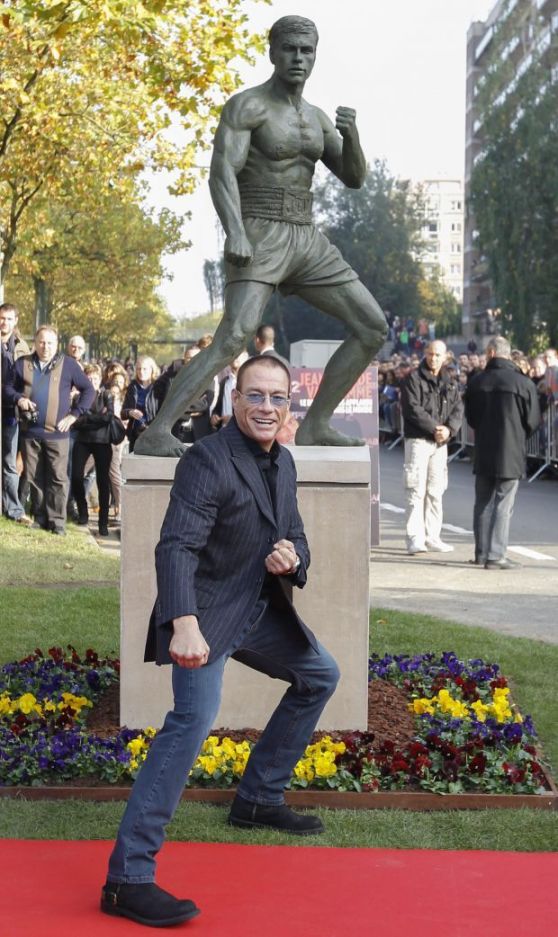