Xanadu was more than a flop. As part of a double bill with Can’t Stop the Music, it was the inspiration for the Golden Raspberry Awards, which recognize the worst films of the year. Yes, somehow a disco rollerskating remake of Down to Earth — itself the sequel to Here Comes Mr. Jordan — ended up being a critically reviled mess. Go figure.

The film was originally going to be a relatively low-budget roller disco picture. But as more prominent performers joined the production, it grew larger and larger in scope. Yet rollerskating improbably remained a recurring theme. Also, the strange mix of Jeff Lynne’s Electric Light Orchestra and Olivia Newton-John — along with Cliff Richard and The Tubes — made for an eclectic soundtrack that became a hit independent of the moribund status of the film that inspired it.

But hey — what do you want from a movie that quotes from Samuel Taylor Coleridge’s “Kubla Khan,” a poem written after a night of opium indulgence?

A large mural of the Nine Muses of Olympus comes to life, with women emerging from it and flying away. In the original script, Sonny Malone (Michael Beck from The Warriors, Megaforce and TV movie giallo lost gem Blackout) painted that mural, which makes sense. In the movie, it’s just the start of things as we follow one of those muses to Earth and meet Sonny as he’s about to give up on his dream of being an artist.

Sonny’s latest job is painting an album cover for a band called The Nine Sisters, which has a beautiful woman in front of an art deco auditorium, who just happens to look like the roller skater who kissed him and ran away. Sonny’s obsessed with her and learns that her name is Kira and well, she’s Olivia Newton-John and also one of the legendary Muses.

Later, Sonny befriends Daniel “Danny” McGuire (Gene Kelly!) who was once a big band leader but is now a construction mogul. Turns out he had a Muse once who looked just like Kira, who gets the two men to build a gigantic nightclub. For some reason, both of these guys got mad when they learned that the woman they love is some Olympian ideal.

Of course, Kira has gone against the Prime Directive and fallen in love, so shes called back to Xanadu, but Sonny can get there by roller skating as hard as he can through the mural. After debating her father Zeus, he and his wife Mnemosyne agree to allow Kira to return to Earth for a moment or maybe forever — you know, that whole time is different between the afterlife and here kind of conundrum.

Kira and the Muses perform at the new nightclub — also called Xanadu — before flying back to the real Xanadu. Yet a waitress who looks just like Kira stays behind, giving no easy answers.

Xanadu is the second movie of this week of musicals that features Adolfo Quinones, also known as the breakdancer Shabba Doo. You may remember him as Ozone in the two Breakin’ movies. And one of the Muses is Sandahl Bergman, who would soon be amazing in movies like Conan the Barbarian and She. This is also strangely the second movie this week that John “Fee” Waybill and Vince Welnick of The Tubes showed up in.

Somehow, director Robert Greenwald emerged to create the celebrated TV movie The Burning Bed before starting a new career in the next century creative left wing documentaries like Outfoxed: Rupert Murdoch’s War on Journalism and Wal-Mart: The High Cost of Low Price.

Amazingly, this became a well-received musical years after it failed as a movie. Me, I remember Marvel Super Special #17, the comic book adaption and wondering why anyone would want to read it. 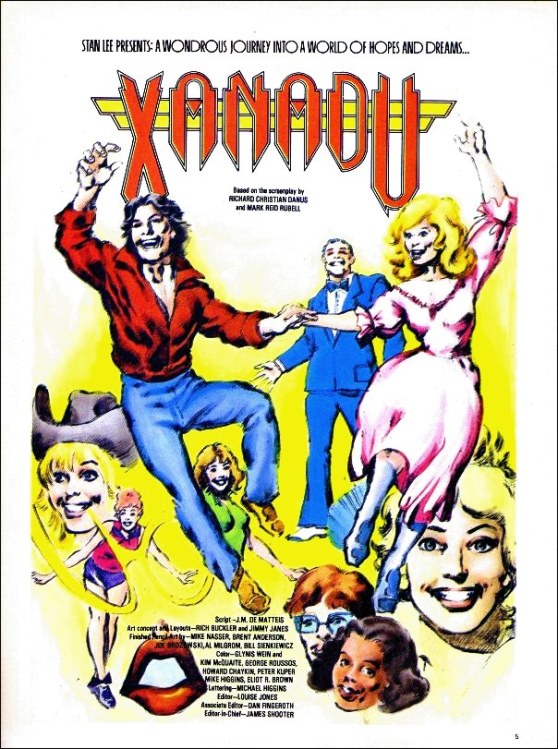 Xanadu is a movie that could only emerge in 1980. That said, it has some great songs like “Magic” and “Suddenly,” but somehow this is a musical that proves that you can make a bad movie from great songs. It’s all too much — too much skating, too much gloss, too much schmaltz. Yet there’s something to love under all that glitter.

You can watch this for free on Tubi.