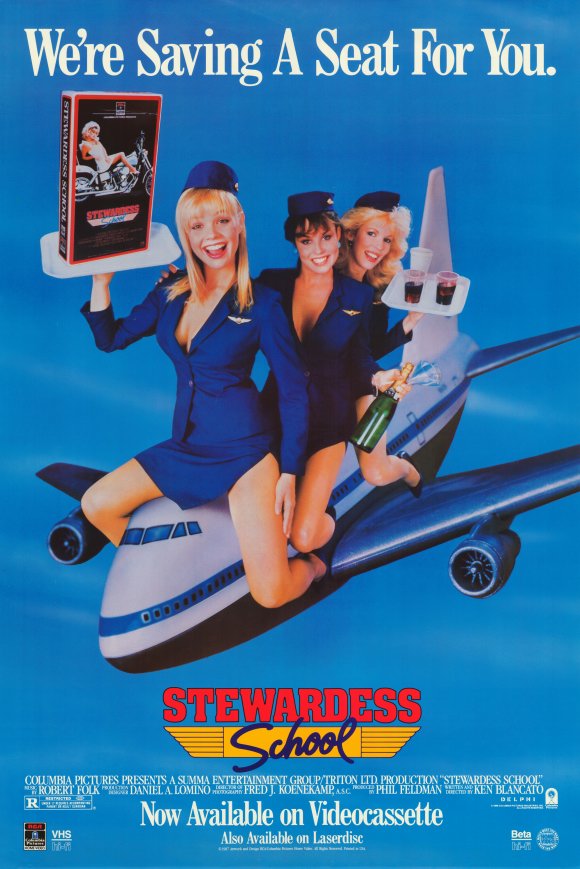 Any movie that starts with a plane crashing into downtown LA that’s played as a total farce is one I’m going to remember. Philo (Brett Cullen, who was on Falcon Crest and played Johnny Blaze’s dad in 2007’s Ghost RIder) has always wanted to be a pilot, but that crash — in a simulator — is because his contact lenses got knocked out by his friend and fellow pilot George (Donny Most, here booked as Don).

They decide that they want to stay on planes, so they enroll at Weidermeyer Academy, a stewardess schools. Imagine Police Academy throughout this movie, with the teachers like Miss “Ironpants” Grummet as the older cops and the students as the cadets. Mary Cadorette — who played Vicky, the girl who finally got Jack Tripper to settle down and go from Three’s Company to Three’s a Crowd — is Kelly Johnson, an extremely clumsy girl. There’s a stereotypical gay guy. A frumpy overweight girl played by Wendie Jo Sperber, as Wendie played this role in nearly every film. There’s Wanda Polanski, a pro wrestler who just lost her latest boyfriend played by Conan the Barbarian‘s Sandahl Bergman. Julia Montgomery — yes, Betty Childs herself — plays an overly nice version of that role. Corinne Bohrer plays a punk rock girl in love with a biker (she’s a vet of these movies, appearing in Zapped!, Joysticks, Surf II, Revenge of the Nerds IV: Nerds in Love and the fourth Police Academy movie). And oh yeah — Judy Landers as Sugar Dubois, a hooker with a heart of gold that’s on work release.

After going through hell, everyone graduates and gets a job at the struggling Stromboli Air. Their first flight has a blind person’s convention and a man with a bomb who doses people with LSD. Of course, our heroes have to land the plane and fix things. But don’t worry — everything works out just fine.

Voiceover artist Rob Paulsen (Pinky of Pinky and the Brain amongst 250 different animated characters and over 1000 commercials) shows up in a rare live action role. Sherman Helmsley appears briefly as Mr. Buttersworth. And the owner of the school is played by William Bogert, who hosted the Frontline segments on Chapelle’s Show.

If you had Comedy Central in the 1990’s, there’s a good chance you saw this movie. Trust me. You did.