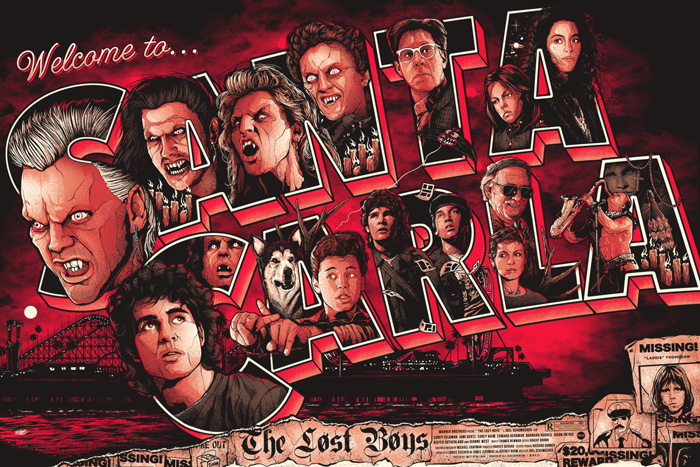 Day 20 of the Scarecrow Psychotronic Challenge is 20. VIDEO STORE DAY. The most important day of this challenge. Watch something physically purchased from an actual video store. If you live in a place that is unfortunate enough not to have one of these archival treasures then watch a movie with a video store in it at least. #vivaphysicalmedia! Sadly, the last Family Video locations that were within a half an hour of our house closed at the beginning of the year. It was incredibly depressing, despite the fact that we bought a lot of films in the closing of the store. But it felt like going to the estate sale of one of your best friends. I teared up a bit in the parking lot, because there’s nowhere left other than Redbox to look for new films. And well, those boxes may be convenient, but they just aren’t the same.

That means that I had to look for something with a video store scene in it. And that leads me to The Lost Boys, a movie that pretty much sums up the 1980’s, the days when video was king.

When I first put in The Lost Boys, my wife mentioned that she would watch it for a few minutes. Of course, she ended up watching nearly the whole thing, remarking how attractive every guy in it is, how she dressed as Star for Halloween as a little girl and reciting the dialogue word for word. After all, she says, it is the perfect 1980’s movie.

Michael (Jason Patric, who my wife also loves in Speed 2: Cruise Control) and Sam Emerson (Corey Haim, whose 976 hotline was called by my wife every single day) are the children of divorce, moving with their mother Lucy (Dianne Wiest, who my wife loves in Practical Magic) to the tourist town of Santa Carla.

They’ll be living with their strange grandpa (Barnard Hughes, Sisters) and trying to acclimate to what just might be the murder capitol of the United States (it used to be Youngstown, Ohio, a town I grew up close to). Just look at the boardwalk — it’s covered with posters of missing kids.

At a concert (once, SNL was funny and did this sketch based on this scene) featuring a shirtless and oiled up man playing saxophone (he’s actually called The Believer if you read the Vertigo Lost Boys comic book that came out in 2016). Michael falls in love quickly with Star (Jami Gertz, Less than Zero), which brings him into the orbit of the Lost Boys, led by David (a perfect Kiefer Sutherland).

Meanwhile, Sam is meeting Edgar and Alan Frog (Corey Feldman, another of my wife’s 976 call loves and Jamison Newlander, who is in the 1988 remake of The Blob), two comic shop working kids who are really fearless vampire killers. They claim that Santa Carla is the hometown of numerous vampires and that his brother could be one of them.

Tying into today’s theme of video stores, the kids’ mom soon meets Max (Edward Herrmann, Overboard), a kindly video shop owner who seems at odds with the Lost Boys that run the boardwalk (Bill S. Preston, Esq. himself, Alec Winter, is amongst their number).

The divide between brothers before and after puberty is clearly delineated by this film, as Sam is content to sing old soul songs in the bathtub with Michael is out there chasing strange women, hanging from railroad bridges and watching rice turn into maggots. You can also see this movie as the struggle between growing up and growing away from your family. Or dealing with a mother who is starting to date again and how that changes your perceptions of her. There’s also the fact that the title itself is a reference to J.M. Barrie’s Peter Pan stories, boys who will never grow up.

Of course, everything leads to a final conflict between the Emersons and the Lost Boys, with Max as their secret leader. I always loved how the video store owner’s goal all along was to finally find a mother for his motley collection of vampiric ruffians. The way he reacts when she isn’t afraid of them at the video store telegraphs this upon repeated viewings. And does anything beat grandpa’s last line? “One thing about living in Santa Carla I never could stomach: all the damn vampires.”?

After starting his directing career with The Incredible Shrinking Woman and D.C. Cab, Joel Schumacher really did an amazing job on this film. You can almost forgive him for his work on the Batman films. No, not really. You can never forgive that.

This really is the perfect 80’s film. I always felt for the vampires more than the humans. Never grow up. Never die. Never age. How does that sound bad? Sure, you have to kill other gangs on the boardwalk, but is that such a rough life?

There were plans to make a sequel named The Lost Girls with David returning as the villain — noticeably he’s the only vampire that doesn’t dissolve — but it just never worked out. There are several direct to video sequels to this that I’ve never seen, Lost Boys: The Tribe (featuring brother Angus Sutherland as the lead vampire) and Lost Boys: The Thirst. A fourth film was in the works, as well as a Frog Brothers TV show, when Warner Premiere went out of business.

Finally — I just want to mention how perfect this scene in What We Do in the Shadows is.