This was the last movie of a long weekend of drive-in fun. But eight movies in two days can be a test for your endurance and Becca just wanted to hear home. Luckily, I watched the beginning and finished via video in the days following!

We first learn of the Deadly Spawn when they kill two campers, then begin moving toward the home of Sam (James L. Brewster, who also shows up briefly in Maniac) and Barb. Also home are their children, college guy Pete and monster kid Charles. Oh yeah — Uncle Herb and Aunt Millie are also visiting. All seems safe and secure until the parents are devoured minutes into the film.

No one knows that yet — Pete is too busy setting up a study date with Ellen, Frankie and Kathy. Meanwhile, Uncle Herb thinks Charles is nuts, so he decides to interview him. Aunt Millie? Well, she’s going to a luncheon.

When an electrician arrives to check on the basement, why shouldn’t Charles put on a monster costume and scare him? Charles soon discovers a variety of Deadly Spawn feasting on the electrician and his mother. Realizing they react to sound — and beating A Quiet Place to the punch by nearly 40 years — he silently escapes.

The study date kids find a dead Spawn that looks like a tadpole. Instead of, you know, throwing it away, they decide to dissect it. And they at the retirement luncheon at Bunny’s house, the Deadly Spawn attack, only for a gaggle of geriatric grandmas to grandly grind them into gore! This is my favorite scene in the movie, just moments of pure mania as these old ladies go buck wild and blend, slice and stab these beasts into nothingness! And the dialogue in this scene!

Bunny: Do you know what I’ve always wanted?

Aunt Millie: A WHAT?

Bunny: A gorilla! But, they don’t seem to make fine ceramics of the great apes, for some reason. They are our nearest relations, you know, the great apes. But they never left the proverbial Garden of Eden like we did. Did you know he’s a vegetarian?

Aunt Millie: Who is?

Bunny: The gorilla! No eating the flesh for him, no sir. He’s peace loving, and adorable!

The science buffs try to get Uncle Herb’s opinion, but he’s already being eaten. They run through the house, one step ahead of the Spawn until one bites Ellen’s head clean off her body and tosses her body away! Charles ends up saving the day with a prop head filled with flash powder and soon, the town begins to mobilize, killing every Spawn they can find.

Later that night, one lone cop is outside the house. Everyone is confident that the Deadly Spawn have been wiped out, but that’s when a gigantic one rises from the ground to end the film!

Charles was played by Charles George Hildebrandt, which may seem like a familiar name. That’s because his father is fantasy illustrator Tim Hildebrandt. The film was shot in their house and Tim was an executive producer. 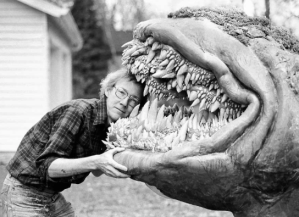 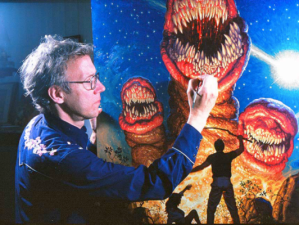 There’s an official site for the film and you can find the Synapse edition for sale at Diabolik DVD. There’s also an Arrow Video release that’s pretty hard to find now. This is worth tracking down — I’d compare it to Dead Alive favorably. The acting isn’t great, but we’re here to watch monster devour peoples’ faces, right? Right!