I love Paul Bartel. He elevates any movie that he makes a cameo in. And if he only directed Death Race 2000, he’d already have earned my adoration. Additionally, I love Mary Woronov. Much like her frequent collaborator Paul, she also makes any movie better just for showing up for a few moments.

Together, they made Eating Raoul, a movie that for some reason I never watched until now. And it’s pretty much perfect.

Paul and Mary play The Blands, a wine dealer and nurse who dream of a better life. They’re prudes who only believe in hugging and kissing, saving their passion for food and drink. They’re also given to quick anger, which leads to Paul being fired from his job and those dreams fading. Throw in the fact that they live in a building full of swingers and things start to look bleak for the Blanks.

After one of those swingers breaks in, Paul kills him with a frying pan and they throw him into the trash compactor. One day later, they do the very same thing and realize that just by killing people and getting their wallets, all their dreams may come true. After all, the bank only tried to get into Mary’s pants (as everyone but Paul tries to do). 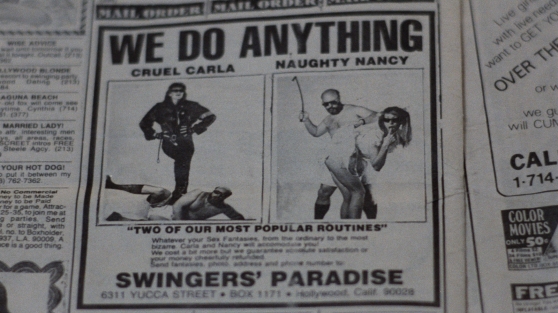 Soon, they meet Raoul (Robert Beltran, Night of the Comet and TV’s Star Trek Voyager), a locksmith con artist who breaks into their house the night after installing new locks. While in their apartment, he falls over a dead Nazi that Paul had just killed and cleaned up. He agrees to keep their secret and sell the bodies for more cash. Sure, he’s selling those bodies to a dog food company, but he’s also stealing their cars and selling them.
The very next day, while Paul is buying groceries and a new frying pan (as Mary doesn’t want to kill and cook with the same pan), a hippie client (Ed Begely Jr.) arrives late and tries to rape Mary. Luckily, Raoul arrives and kills the man with his belt. Soon, he and Mary are smoking the man’s weed and making love.

Raoul soon falls for Mary, despite her continually saying that it’s all wrong and needing marijuana to relax. The lusty locksmith tries to kill Paul with his car (after a sequence where John Paragon plays a sex shop salesman. Paragon is better known as Jambi the Genie and the voice of Pterri the Pterodactyl on Pee Wee’s Playhouse, as well as collaborating with Cassandra Peterson on her many Elvira projects), which leads to our hero working with Doris the Dominatrix to start a gaslighting campaign against Raoul, climaxing with prescribing him saltpeter pills that keep him from getting hard.After a giant swinger party, Paul ends up killing tons of rich swingers, taking their cars and money, finally able to achieve the dreams he shares with his wife. This leads to a drunken Raoul breaking back into the Bland house, disclosing the affair and telling Paul that he is taking Mary away. Of course, he has to kill Paul first, so he asks Mary to bring him the frying pan.

Instead, Mary shows her true colors and love for Paul, killing Raoul. But wait! The real estate agent is on his way and there’s no time to make him dinner! Of course, there’s always…Raoul.

The film ends with our cute little couple standing in front of their new restaurant, Paul and Mary’s Country Kitchen, with the caption, “Bon Appétit.”

Bartel shot this film on odds and ends of stock in between projects. Some of the longer runs of stock given to the production had been rejected by others because their cases had mold grown on the cans that house the film. Often, the crew would have no idea if the film they were shooting was even usable. That said, this movie has a quick, bouncy, punk rock energy that seems improvised throughout. 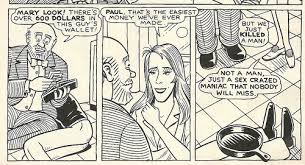 There was even a comic book released along with the movie by Kim Deitch (Waldo the Cat) that I need a copy of! Sure, Eating Raoul isn’t packed with the human eating spectacle of every other film this week, but that shouldn’t stop you from watching it. It’s pure joy from beginning to end!