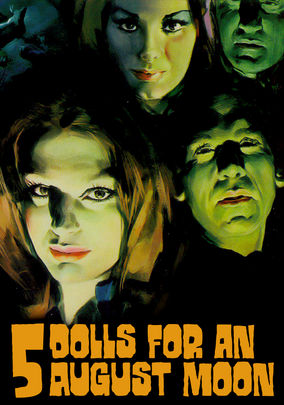 Bava believed this was one of his worst films. It wasn’t released in the U.S. until 2001. And yet, I found plenty to like about this murder-filled affair. It also taught me an important lesson: if you invent a new chemical process, don’t go to a rich industrialist’s vacation island.

George Stark is one of those industrialists and he’s invited a bunch of guests to his private island, including Professor Farrell, who has created an industrial resin. Several of the guests want him to sell it. Here’s where the hijinks ensue.

Stark’s wife Jill is sleeping with Farrell’s wife, Trudy (Ira von Fürstenberg, The Fifth Chord). Stark’s partner Nick treats his wife, Marie (Edwige Fenech!) horribly, but allows her to sleep with Charles, one of the servants. Isabelle (Ely Galleani, A Lizard in a Woman’s Skin) is a teenage girl along for the ride. And Jack and Peggy just seem to get along, unlike everyone else.

The men beg Farrell for his formula, sending away the only way off the island — a motorboat — away until the deal is done. So when Charles is killed, they simply hang him in the freezer until they can get the radio working to call the mainland. As you do.

Then, teenage Isabelle kills Farrell, but the others only know he’s dead. The killings now pick up, with Peggy being shot to death, Marie being stabbed and Jill being electrocuted in the bathtub. One by one, their bodies are added to the freezer.

With Isabelle having gone missing, Stark, Jack, Nick, and Trudy decide to stay in the same room for the night, as one of them has to be the murderer. Nick takes off after an argument and is found dead the next day, so of course, as is custom, he is also added to the freezer.

Stark has a boat, which makes you think he’d be the suspect. But as he comes back to the house, Jack reveals that he has killed everyone else to steal their checks. He kills Stark and meets with Trudy, who was the real boss. She’s got the resin formula. He has the checks. But they’re both out for themselves and end up killing one another. Isabelle makes herself known and takes everything.

That’s not the whole story. Isabelle also shows up to see Farrell in prison. He didn’t die, but had come up with the whole scheme with Trudy. Turns out he wasn’t the good man that he appeared to be and had stolen the formula. He got Isabelle to be part of his plan, but she gave him a drug that would make him appear to be dead, then pushed him out to the sea. Rescuers found him and he was so messed up on the drug that he confessed. She laughs about the whole thing and leaves the prison, finding it all rather funny that he’ll be hung in the morning while she’ll enjoy three million dollars.

There are better Bava films to be found, but there are plenty of twists and turns in this film. It’s certainly entertaining and you know, Edwige Fenech is in it. So there are way worse movies to spend your time with.

Just remember. If you come up with a great formula or steal one, just keep it to yourself. And don’t go on vacation. Stay at work.

UPDATE: You can watch this for free on Amazon Prime.