SLASH Filmfestival is Austria’s largest event dedicated to fantastic cinema. Founded in 2010, it quickly grew in size and scope, attracting close to 15.000 visitors over its 11-day run. Each year’s program is comprised of 50+ Austrian, European or international premieres of highlights from the field of fantastic cinema, ranging from crowd-pleasers to hot docs, from fiercely independent films to heritage revivals.

FANTASTIC SHORTS COMPETITION – CHAPTER I: “Being true to yourself can be tricky, especially if the powers that be love telling you how you should act. With the disruptive wave of a Q-tip that could be a magic wand, SLASH conjures fresh and feral perspectives in which young girls and women quickly grow wise to the fact that they don’t need anyone to figure themselves out. Join us for a walk on the wild side where supportive sisterhood, secret covens and pack hunting are all on the spectrum of self-reliance that fuels the fire of self-empowerment. Enter the feminocentric space of these wickedly modern works and experience a rite of passage in which reconnecting with one’s roots triggers an ancestral rebirth that transcends limitations and expectations. As roaring women reclaim the dinosauric ferocity of their voices and nourish their bodies—with nonconforming warts and unplucked feathers!—however they see fit, men will learn the consequences of not zipping their lips. Marakachi…” 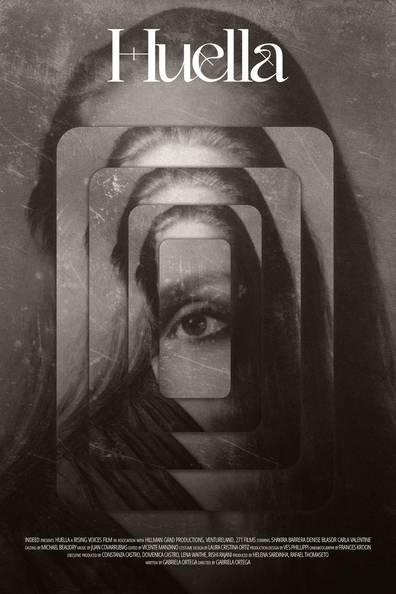 Huella (2021): Directed and written by Gabriela Ortega, this gorgeous short has Daniela (Shakila Barrera) escaping from the drudgery of her work-from-home customer service agent job when the ghost of her grandmother (Denise Blasor) who makes her consider if the fleeting moments of dancing she does upon her rooftop are enough.

Generally, ghosts come to us in films to shock or attempt to hurt us. Not so here, in a movie whose name means “fingerprint.” Ghosts can hopefully shock us from our set lives and help us change the path of our lives. This movie only has fourteen minutes and yet does so much with them. 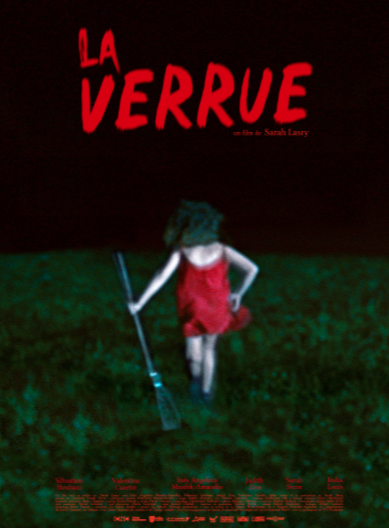 Spell on You (2021): Salomé is ten years old and has a wart on her nose. This — and the way her father treats her — leads to her being disgusted by her own reflection. At night, she spies on her parents through the keyhole. And there’s weirdness all around her. I was surprised — I should have studied that English title as this was originally called La Verrue which means the wart and doesn’t spell it out — to discover that Salomé is destined to be a witch and escape the pain of her childhood, the ways that her father treats her — shoving her from his embrace and screaming that she’s infectious with her wart — and embracing who she is truly meant to be. Director Sarah Lasry has created a gorgeous looking film that stands between our real world and the world of the occult. 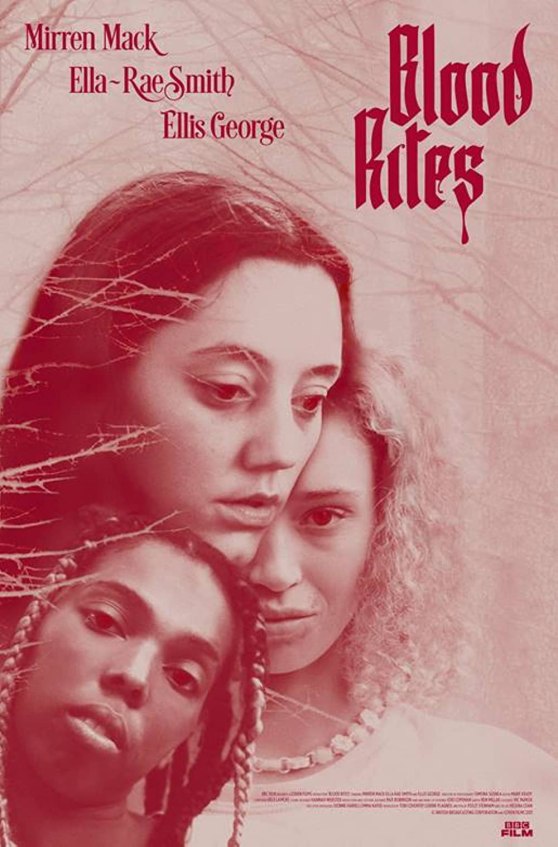 Blood Rites (2021): Directed by Helena Coan and written by Polly Stenham (The Neon Demon) based on the story by Daisy Johnson from her book Fen Stories, this is all about Arabella (Ellis George), Rose (Mirren Mack) and Great (Ella-Rae Smith), three vampiric women losing control as they hide in a house in the English Fens. This seems like a first version of a longer and more complex film, but for what exists now, it’s really well made and has some moments of true horror as you watch these young women feed. All three leads are quite talented and really embody their roles.

The novel that this was based on never explains if the girls are vampires, cannibals or just insane; hanging out a pub called the Fox and Hound, luring men back to their home to surround and devour. Johnson sets up the women quite starkly: “When we were younger we learnt men the way other people learnt languages or the violin. We cared only for what they wanted so much it ruined them. Men could pretend they were otherwise, could enact the illusion of self-control, but we knew the running stress of their minds.”

This is quick, dark and makes you want to drink more. 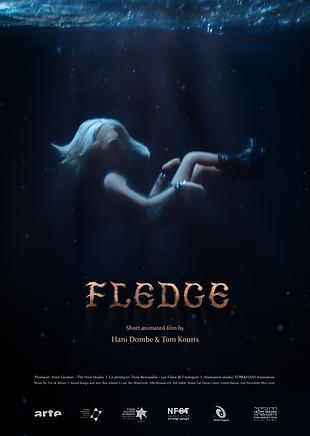 Fledge (2021): Directed by Tom Kouris and Hani Dombe, who also wrote this movie, Fledge is all about a young girl who is part of the Russian immigration to Israel in the 90’s named Elina. As she tries to fit into her new country, meet friends and overcome her mother leaving her behind, she also starts to grow feathers, painfully plucking them from her body every day before anyone else can see her. Created in a stop-motion animation style, Fledge has a unique look and a good story to tell as well. It really struck me with its art direction and how its unreal look and concept created genuine characters and authentic emotions. 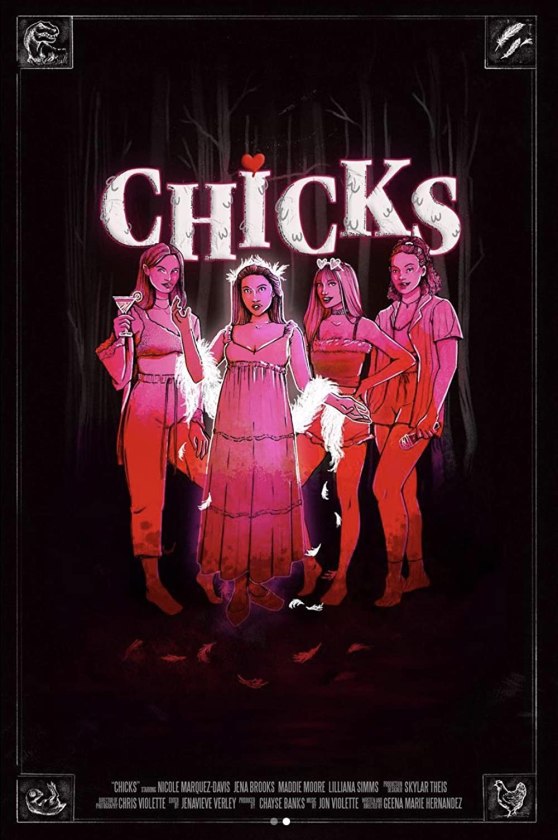 Chicks (2022): Geena Marie Hernandez directed and wrote this tale of a “girly, cotton-candy colored slumber party” that transforms into an occult ritual when Polly (Nikole Davis) is invited to join the popular upper echelon of high school royalty for a sleepover. Yet Lizzie (Jena Brooks), Kelly (Maddie Moore) and Jazz (Lilliana Simms) have plans for her and honestly, I could see the witch elements rolling in but I had no idea where this was going, nor did I get the pun of the title until the end of the film. I’ll let you go in as blind as I was, but man, this looks great, like a pink candy nightmare and the end is wonderful. Well done. 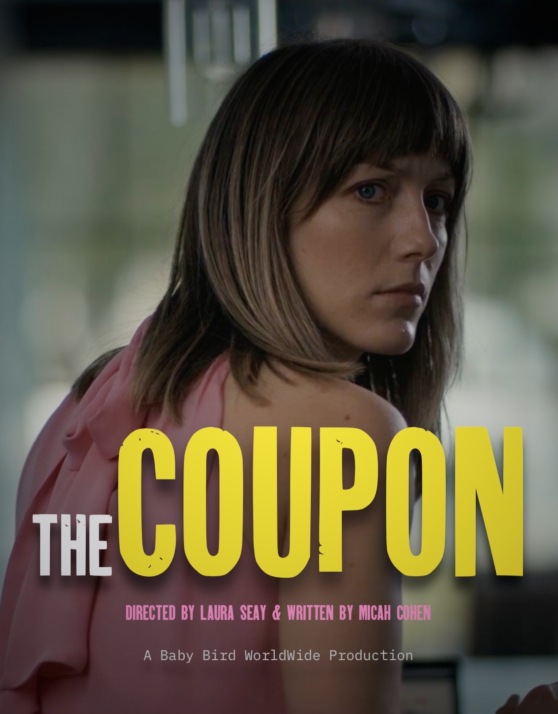 The Coupon (2021): Wendy (director Laura Seay) gave her husband (writer Micah Cohen) a silly coupon book for his birthday, including a get one oral favor free offer. You never cash in these coupons. But when he runs over a man (Adam J. Harrington) and doesn’t want to report it to insurance, he ends up giving him all the money in his wallet, as well as the coupon and a ride to the hospital. Now, the coupon has come back to be collected.

This is a movie that takes a simple idea and delivers it flawlessly. I had a blast with this one, as even though you can see the punchline coming, it’s still so well told.