This shot-in-one-week effort was Bert I. Gordon’s first solo movie as a writer-director (he co-directed the previous year’s Serpent Island, which he wrote), made with borrowed equipment and the cast of four all working on deferred salaries. The rest of the footage is all stock, including a mammoth taken from One Million B.C. And it takes 10 minutes — of educational space exploration stock footage and narration — before the first actor steps foot on the newly discovered planet.

It takes place five years in the future, which would be sixty years in our past.

Zoologist Dr. Richard Gordon, geologist Dr. Nora Pierce, medical specialist Dr. Ralph Martin, and chemist Dr. Patrica Bennett (while the men wear baggy flight suits and military-issue boots, the gals wear sensible gauchos and knee-high boots) are on a space voyage to the planet Nova in the hopes of starting a new Earth colony. It’s filled with animals (bears, elk) that are way bigger than they should be — remember that Burt I. Gordon directed this one — including King Dinosaur, which is really an iguana. So the scientists do what any good researcher should: they nuke the processed-shot and floating-matte planet, and leave.

Is there a deeper message about Manifest Destiny and American Imperialism in the frames? Is this a plight of the American Indian allegory? Nope. Burt just likes big creatures on film and blowing up stuff: for this is a world where, regardless of the intelligence of smartly-dressed women (clad in ballet flats and wedged mules with their tailored flight wears) conquering space — just like in The Angry Red Planet and Gog — they’re still screaming and imploring the men to “do something” and to shoot everything they survey. 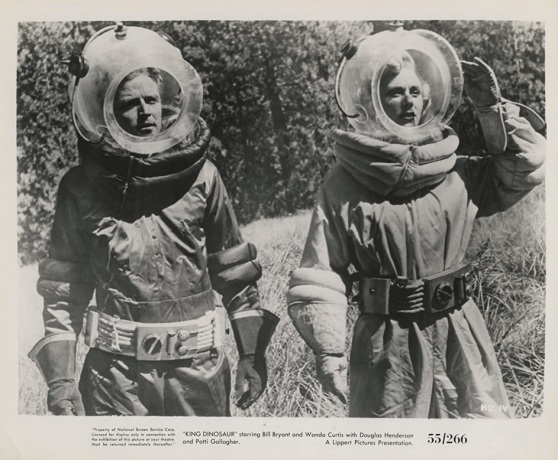 The funny thing about this movie is that Ray Harryhausen and Ray Bradbury wanted to provide the dinosaur effects, so they brought in some footage. Gordon watched it, didn’t acknowledge them and just walked out. Harryhausen and Bradbury were obviously upset, but a few years later, at the premiere, Bradbury allegedly approached Gordon and said, “Remember me? Ray Bradbury. It won’t make a dime!”

If you wonder, “Have I heard this music before?” then you’ve probably seen Ed Wood’s The Violent Years. Actually, you should just watch that movie. It’s way better than this. Even at its short running time at a measly 63 minutes — 43 if you cut out the opening stock-narration salvo. And if you recognized the narrator, that’s Marvin Miller, who was the voice of Robby The Robot in Forbidden Planet and was Mr. Proteus on Commander Buzz Corey and the Space Patrol. And if you recognize the rocketing landing from King Dinosaur, that’s because it ended up in Fire Maidens from Outer Space.

You can watch the Mystery Science Theater 3000 version of this movie on Amazon Prime and Tubi. It’s also available without the commentary on Daily Motion.