DAY 7. DAIKAIJU: The bigger the better. Who needs a city anyway?

We already did War of the Gargantuas today, but you can never get enough giant monster movies, much less one that is endlessly self-referential!

Japan is in a mess to say the least. The weather is all screwed up, volcanoes have stopped erupting, there are too many virgins and that can only mean one thing — a giant monster named Mono is on the loose.

Disgraced scientist and Sailor Moon cosplayer Doctor Totaro Saigo has a special formula that can transform anyone — even the lowly assistant Nitta — to become a gigantic super soldier ready to take on even the largest of kaiju.

Syuusuke Saito plays Nitta before the transformation. He’s Kyoryu Black from Zyuden Sentai Kyoryuger, if you watch Japanese sentai shows (think Power Rangers). Once he transforms, he becomes Kota Ibushi, current New Japan Pro Wrestling star who started his career in the DDT promotion, or Dramatic Dream Team. If you like just plain strange things to happen in your pro wrestling, I’d advise you to check them out. For example, Ibushi once had a series of matches with Yoshihiko, an inflatable doll.

The movie begins as the SpiritSpots.com team visits Specter Pass, where eyewitnesses have reported strange lights. After urinating on a special idol, Professor Nindo Izumi appears to warn them of the danger that this area of Japan presents. They don’t listen and are all killed one by one, just like a slasher movie.

The next day, Nitta and Professor Saigo’s daughter Miwa discover the Juganda, a prehistoric flower that’s based on the Juran from Ultra Q and an egg that contains the key to Setupp X Cells, which Saigo believes are the key to jump-starting the next stage of human evolution.

Meanwhile, at Mount Myojin, the kaiju Mono emerges before a crowd of soldiers and monster rights protestors, who it promptly devours. That’s when Saigo uses Nitta’s love for his daughter to convince him to take the Steupp X Cells and put on a pair of magical briefs that change size as he grows. After nearly three minutes of pro wrestling mayhem, Mono retreats and Nitta retains his sexy new body.

Nitta becomes a big celebrity called “The Great Giant” and is chased by a mysterious girl named Lisa who only wants his magical size-changing underwear. Miwa grows depressed and Mono grows stronger thanks to a second egg and her newfound poison fog power. Luckily, Saigo has even better Setupp X Cells and Izumi has trained Nitta to even be able to stop the flow of waterfalls. 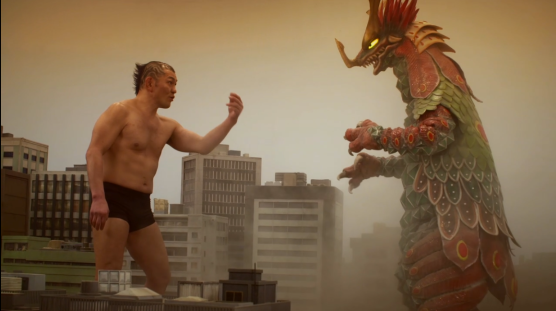 However, even Lisa coming back to the good side and Miwa getting back Nitta’s special briefs isn’t enough. Saigo must inject Nitta with evil cells that transform him into Japanese legend Minoru Suzuki, the most intimidating pro wrestler perhaps ever. He basically annihilates the monster, who it turns out is really an old woman.

Ibushi isn’t alone in having matches with strange opponents. Suzuki has had a several years-long feud with Mecha Mummy. One of their matches involved an extended sequence where they became friends and went fishing before hatred overcame their truce. The strange thing is, Suzuki was the co-founder of Pancrase, one of the first MMA groups in the world. Despite most of their matches not always being 100% real, he has the reputation of being one of the best fighters in all of Japan. He was also the motion actor for King in the video game Tekken.

Your sense of humor may vary, as this is very much in the vein of the Airplane movies, but all about Japanese monster movies, to the point that even scenes from Frankenstein Conquers the World get referenced. It also helps to know a little about Japanese pro wrestling, as Professor Saigo is so out of touch he only knows Giant Baba’s moves, which aren’t as dangerous as the modern powerbombs and top rope — err, top of the building — Phoenix Splashes that Nitta uses on Mono.

My subtitles and the English track on this film were absolutely different, which was kind of great, as they each added their own unique commentary to this completely out there movie. There’s even a scene that shows that training to battle a giant monster is just like getting ready for a boxing match like Rocky! Even the original Ultraman star Sandayu Dokumamushi shows up at the end to save the day!

There’s actually precedent for this movie, believe it or not. In 2004, The Calamari Wrestler featured Osamu Nishimura as a pro wrestler who becomes a giant squid and does battle with wrestlers Akira Nogami.

You can buy this from Sentai Filmworks.