As I was leaving the second Guardians of the Galaxy film, someone was complaining about the writing and I was gobsmacked. Today’s audiences have grown too accustomed to getting exactly what they want out of superhero films, getting to see the exact characters make a seamless leap from printed page to movie screen. Not to be an old man screaming on my yard, but if they’d seen the 1970’s heroes, they’d be singing a very different tune.

That’s why I’ve decided to call out several of the 1970’s superhero movies so you young whippersnappers can see exactly how ridiculous it was.

1. Spider-Man: Stan Lee had always had plans of getting the Marvel characters onto the big and small screen. After several cartoon series that featured incredibly limited animation, Spider-Man was able to be part of PBS’ next level of Sesame Street, The Electric Company. Spider Super Stores pitted the hero against all manner of villains, including a young Morgan Freeman playing Count Dracula. While no Marvel villains appeared on the show, the kid-friendly tie-in comic even had Spidey battle Thanos.

Lee then sold the rights to producer Daniel R. Goodman, who sold the show to CBS. They clashed almost immediately, with Lee telling Marvel’s teen magazine Pizzazz that the results were too juvenile. An initial 90-minute movie did well as did the two seasons of the show, but no one had learned that having younger demographics is positive. Not wanting to be seen as the “superhero” network (they were also airing The Incredible Hulk, Wonder Woman and TV movies for Captain America and Dr. Strange), CBS canceled the show despite good ratings. 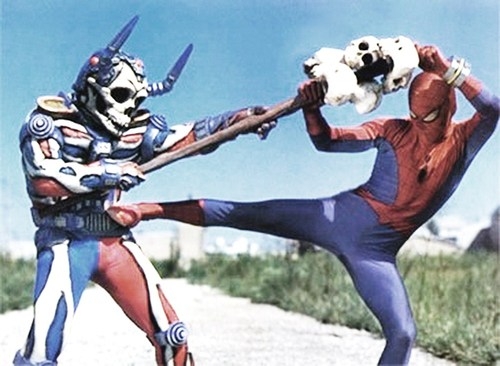 Also, in 1978, Toei — the makers of Kamen Rider — would bring Spider-Man to Japan and place him into his own series where he’d become young motorcyclist Takuya Yamashiro, who uses his spider powers and a giant robot named Leopardon to battle Professor Monster and his evil Iron Cross Army. It’s exactly as amazing and baffling as it sounds.

2. The Incredible Hulk: Starting in 1977 with a two-hour TV movie before an eighty episode series run (and three more TV movies in the 1980’s that were backdoor pilots for Daredevil and Thor), The Incredible Hulk is perhaps the most successful of all the 70’s heroes. A riff on The Fugitive, this show is effortlessly summed up by its opening narration:

“Dr. David Banner—physician, scientist…searching for a way to tap into the hidden strengths that all humans have. Then an accidental overdose of gamma radiation alters his body chemistry. And now, when David Banner grows angry or outraged, a startling metamorphosis occurs. The creature is driven by rage and pursued by an investigative reporter.

Banner: “Mr. McGee, don’t make me angry. You wouldn’t like me when I’m angry.”

The creature is wanted for a murder he didn’t commit. David Banner is believed to be dead. And he must let the world think that he is dead until he can find a way to control the raging spirit that dwells within him.”

Coolest of all, both creators of the Hulk — Stan Lee and Jack Kirby — got to appear on the show.

3. Dr. Strange: Before he became part of the Marvel Cinematic Universe, Dr. Strange was in this 1978 made-for-TV movie that was also a backdoor pilot. Lee served as a creative consultant and Peter Hooten (Night Killer, 2020 Texas Gladiators) as the sorcerer supreme. It’s packed with TV stars, like Michael Ansara and Ted Cassidy, and features future Arrested Development matriarch Jessica Walter as the villainous Morgana Le Fay. Unfortunately, it aired against Roots and got vanquished in the ratings.

4. Captain America: In 1979 and 1989, Reb Brown (who of course is Yor, Hunter from the Future) would wear the winged mask and carry the shield of Cap for two TV movies. As with many 1970’s adaptions, the actual story of Cap is played with fast and loose, as this modern version is the son of the original. The costume is also totally ridiculous, but at least Christopher Lee shows up as the villain.

5. The Six Million Dollar Man: Based on the Martin Caidin novel Cyborg, this TV series started with three pilot films in 1973 — the 70’s were through if anything — and expanded to five seasons that took it through 1978. There was also a spin-off, The Bionic Woman, and three TV movies that ran between 1987 and 1994.

The show begins with this voice-over: “Steve Austin, astronaut. A man barely alive. Gentlemen, we can rebuild him. We have the technology. We have the capability to make the world’s first bionic man. Steve Austin will be that man. Better than he was before. Better…stronger…faster.”

I can’t really explain how huge this show was in my childhood. The toys, the comics, the record…it had it all. There have been plans to remake it for decades that have yet to happen.

6. The Gemini Man: This show ran so quickly in 1976 that you may have missed it. After all, it was only 5 episodes of 11 that made it to the air. However, it was a much bigger deal in England, which got this Power Record (it came out in America, because I listened to it constantly) and a comic book. It was a replacement for the previous season’s Invisible Man, which had special effects that were way too expensive.

7. Exo-Man: Iron Man may have not made it to TV, but Exo-Man did. Only a few maniacs like me remember it — many fell asleep during its airing. That’s because there are no superheroics until nearly an hour into the movie.

8. Shazam!: Shazam owned Saturday mornings from 1974 to 1976 as he rolled through the U.S. in a mobile RV and righted wrongs. This show was so important to me — its other segment, Isis, perhaps less so — that my mother made me my own Shazam shirt that I wore constantly. Yes, we had no mass-marketed geek clothing in the mid 1970’s. You have no idea just how hard it was to find comic book stuff other than iron-ons.

Isis was the female side of the show, which was about a schoolteacher who found an Egyptian amulet that transformed her into the goddess Isis. This is the kind of superheroes we got in 1976 and to quote Dana Carvey’s grumpy old man, “We liked it.”

9. The Man from Atlantis: Before he was on Dallas, Patrick Duffy was Mark Harris, the last surviving Atlantean, a man with webbed hands and feet, as well as gills and super strength. After joining the Foundation for Oceanic Research, he soon battled supervillain Mr. Schubert (Victor Buono). The first season was simply four TV movies that ran in 1977, while the series only lasted thirteen episodes against Happy Days and Laverne and Shirley. However, the show was a hit everywhere else in the world, particularly in China where it was the first American series that ever aired there.

10. Wonder Woman: Hollywood had been trying to get Wonder Woman on the air since Batman producer William Dozier tried to sell a series. ABC tried again in 1974 with a pilot featuring Cathy Lee Crosby as the titular heroine before finding success with Linda Carter in the role a season later. After two seasons on ABC set in World War II, it moved to CBS where it ran for two more modern day seasons. There was also an attempt to spin-off Debra Winger as Wonder Girl that never happened. 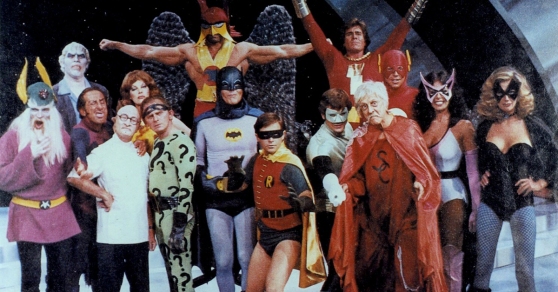 11. DC Superheroes:  We didn’t have the internet in 1979, only TV Guide, a publication that your seven-year-old author read religiously. On January 18 and 25 of that year, Hanna-Barbera created a live-action version of their Super Friends cartoon with these two specials. The first episode, The Challenge, was similar to the 1960’s Batman, even bringing back Adam West and Burt Ward. It did that series one better by also bringing in Flash, Green Lantern, Hawkman, Captain Marvel, Huntress and Black Canary. You can’t imagine my excitement, which only increased once I learned that there would be another special the very next week. That show, The Roast, ruined my childhood dreams in one hour. Instead of heroics, the heroes appear on a roast emceed by Ed McMahon, with characters not from the comics and way too much silliness than my pre-teen mind was prepared for. 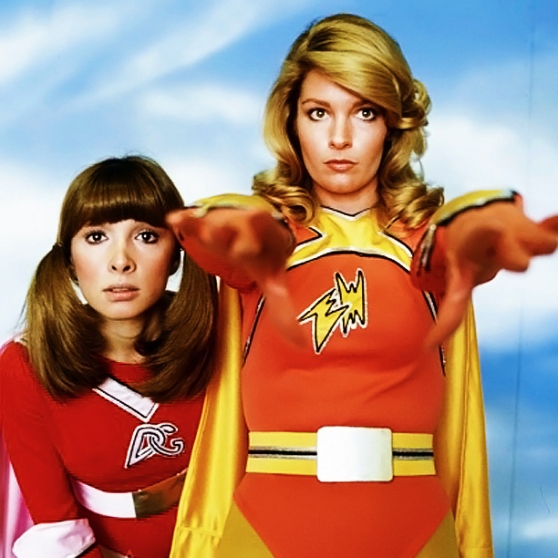 12. Electra Woman and Dyna Girl: Lori and Judy, reporters for Newsmaker magazine, are really Electra Woman and Dyna Girl, who battle Pharaoh and Cleopatra, the Sorcerer, Glitter Rock, Ali Baba, Spider Lady and the Empress of Evil. Deidre Hall would go on from this to become quite the soap opera star. It was part of The Krofft Supershow, which allowed the maniacal brother duo of Sid and Marty Krofft free reign to do pretty much whatever they wanted. It also had two other superheroic style shows: Wonderbug and Bigfoot and Wildboy, which ended up spinning off into its own series, where they would battle zombies and vampires. 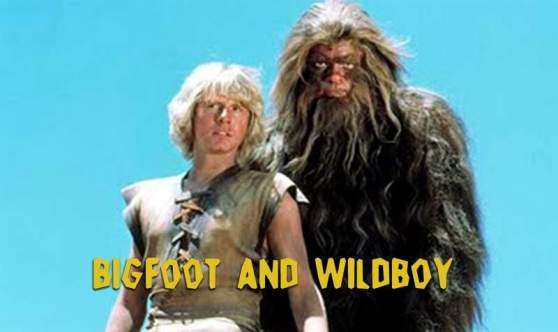 13. Superman: Probably the reason for so many late 1970’s superhero TV shows is this blockbuster, one of the biggest successes of the 1970’s. Launching the career of Christopher Reeve (who was weight trained for this film by David Prowse, who played Darth Vader), this movie had just about every kid out there putting on a cape and attempting to fly. Interestingly enough, while filming this movie, Richard Donner also created about 75% of the 1980 sequel.

14. Doc Savage: Producer Geroge Pal worked for years to get a Doc Savage movie made and this was the result, a big bombastic film that sadly never got a sequel. 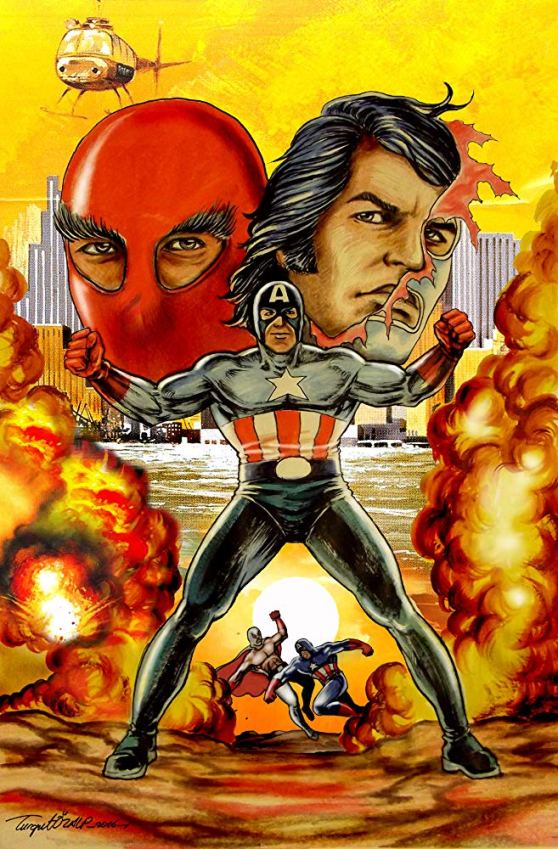 15. 3 Giant Men: Santo and Captain America team up to battle criminal mastermind Spider-Man, who has monstrous eyebrows and feeds women to outboard motors. Yes, this is a real movie. Yes, it’s as awesome as it sounds.

16. Hydrozagadka: This 1971 Polish movie is a Communist parody of the American ideals glorified in Superman. It’s all about a water supply crisis that can only be solved by a hero named Ace. 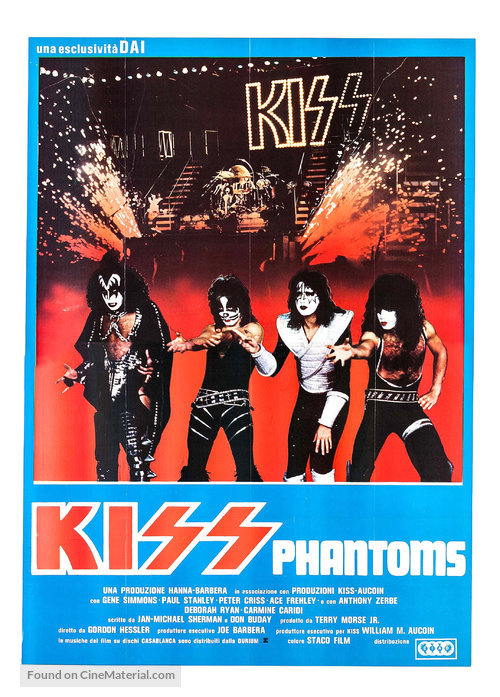 17. Kiss: If Kiss can be rockstars, why can’t they be superheroes? That was the idea in this Hana-Barbera produced TV movie, which even had them battle robot werewolves. Shout it out loud indeed.

18. Infra-Man: Promising even more than bionics, this Shaw Brothers cover version of Ultraman must truly be seen to be believed. Come to think of it, Ultraman played on U.S. TV a lot in the 1970’s, but actually started here way back in 1966.

19. Abar The First Black Superman: When a black scientist moves to a racist neighborhood, he does what any of us would do. He creates a formula that turns his bodyguard into a superhero.

20. Friday Foster: This 1975 blaxploitation film was based on a newspaper strip and stars Pam Grier as an ex-model investigative journalist looking into a conspiracy to eliminate black leaders.

21. Supersonic Man: Kronos is an alien who comes to Earth to help us with our problems in this 1979 Spanish movie. One of those problems? Cameron Mitchell. 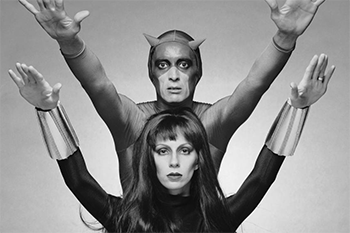 Strangely enough, David Bowie’s wife Angie at one point tried to push for a Black Widow movie, even taking her own photos in costume along with Ben Carruthers dressed as Matt Murdock’s alter ego.

I also want to point out this amazing artwork by Dusty Abell, which shows fifty of the best 1970’s TV science fiction and superhero characters. 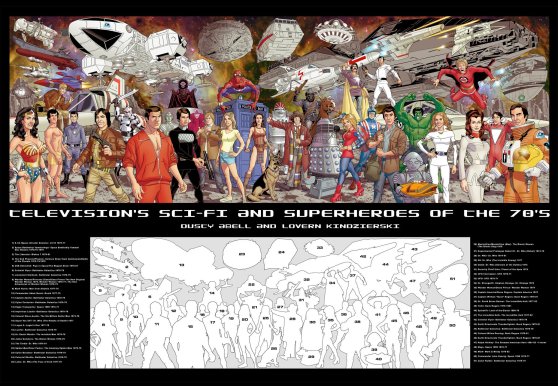 Who did we miss? Let us know!