Written by Joe Carnahan (writer and director of Smokin’ Aces and the movie version of The A-Team, as well as a member of the Creative Council of Represent.Us, a nonpartisan anti-corruption organization) and directed by Eli Roth (Cabin Fever, The Green Inferno), Death Wish was a movie delayed several times by the rampant mass shootings in our country. It arrives at a time when the debate over guns has reached a fever pitch. That said, one viewing of The Killing of America, made way back in 1982, shows that that argument has been going on almost the entire way back to the original Death Wish series.

Do we need another Death Wish? After all, there were five different movies already. Is there something new that the film can speak to? This one attempts to, with numerous blips of info from various media sources as diverse as Chicago DJ Mancow, memes and the site mediatakeout to hip hop’s Sway in the Morning.

Paul Kersey (Willis) and his wife (Elisabeth Shue) are getting ready to say goodbye to their daughter Jordan before she goes to college. After lunch at a restaurant, a valet looks up their home address on their car after hearing they’ll all be out that night. However, Paul gets called into his job as a trauma surgeon — instead of an architect — leaving his family alone at home. This being Death Wish, I’m certain we can all guess what happens next.

Police Detective Kevin Raines (Dean Norris, Starship Troopers) and Detective Leonore Jackson are the cops in charge of the case, but they aren’t getting anywhere. Jordan remains in a coma while Paul grieves for his dead wife, including trying to stop a mugging which ends up with him being beaten. He debates buying a gun but realizes he’ll have to register it and be videotaped (the film wavers here between gun ownership being too easy and providing the right info).

A patient drops a Glock 17 while Paul tries to save his life and thanks to online videos, Paul learns how to use it. Soon, he’s stopping carjackings and killing drug dealers and has been dubbed the Grim Reaper by the media.

When Paul recognizes his stolen watch on a man’s wrist, he uses that man’s phone to get closer to the men who destroyed his family. One by one, he eliminates them before realizing that his actions have brought his family — daughter Jordan, who has emerged from her coma, and brother Frank (Vincent D’Onofrio) — into the killer’s sights.

Paul then uses his legally purchased weapons to defend his home, the police come after its all over and our hero easily explains that he’s not the Grim Reaper. Free of consequence, he’s able to take his daughter to college in New York City. There, he sees a mugging and stares right at the criminals, making the same finger pistol mannerism that Bronson used at the end of the first Death Wish. Interestingly enough, this is an inversion of the original film’s ending, where Kersey moves from New York City to Chicago.

Seeing as how director Eli Roth loves exploitation films, there are plenty of references, such as Paul telling a criminal that he’s torturing that he’s about. to put them into “the most pain a human can endure before going into cardiac arrest,” a fact discovered by scientists of Unit 731 and chronicled by the movie Men Behind the Sun. That scene also uses the Sorcery song “Sacrifice,” which comes from the film Stunt Rock (Sorcery also played the band Headmistress in Rocktober Blood). And a trivia note just for my wife: the last movie that Elisabeth Shue and Vincent D’Onofrio appeared in together was Adventures in Babysitting, which also takes place in Chicago.

This isn’t a bad film. But there’s no real reason for it to exist as it says nothing new other than being a serviceable action film. It’s been criticized as alt right and racist, but I think any Death Wish film is going to be branded the same way. I thought it was pretty even in its depiction and had plenty of different voices throughout.

No matter what you feel about the movie, at least these posters are pretty nice. 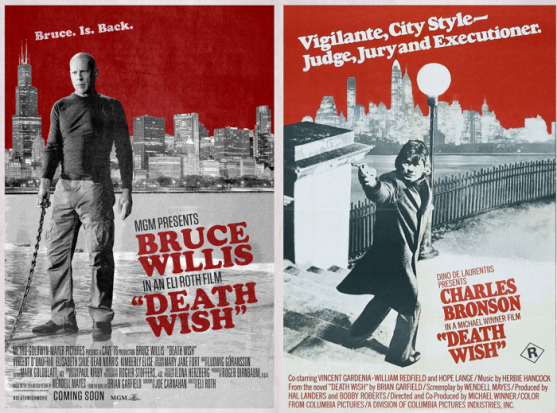 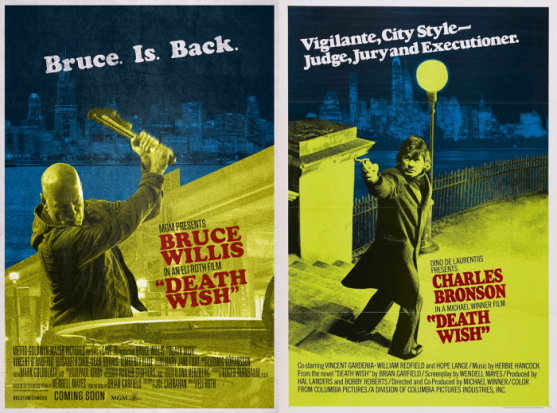