I can’t imagine being the father of a kid who dragged you to the theater to see Dune without you knowing a single thing about it. This is a movie that spends the first ten minutes explaining the world of Dune and how important melange — spice — is, extending life, expanding consciousness and allow space to be folded. There’s also an insane amount of nonsense words blasted at the viewer, stuff like landsraad, gom jabber and sardaukar. Sure, people who devoured the books — hi, I was 12 and never thought I’d ever see a naked woman ever — were ready for the movie. But man, even I can admit that the film can be impenetrable.

They gave out a glossary before the movie! Yes, a glossary! 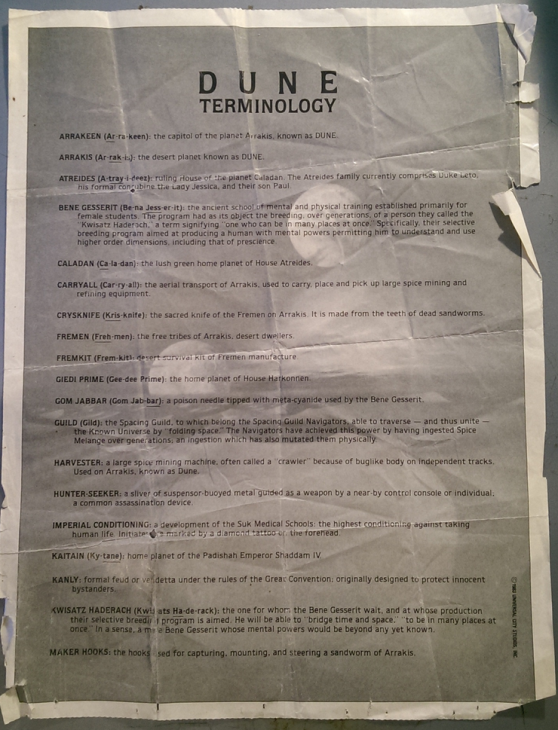 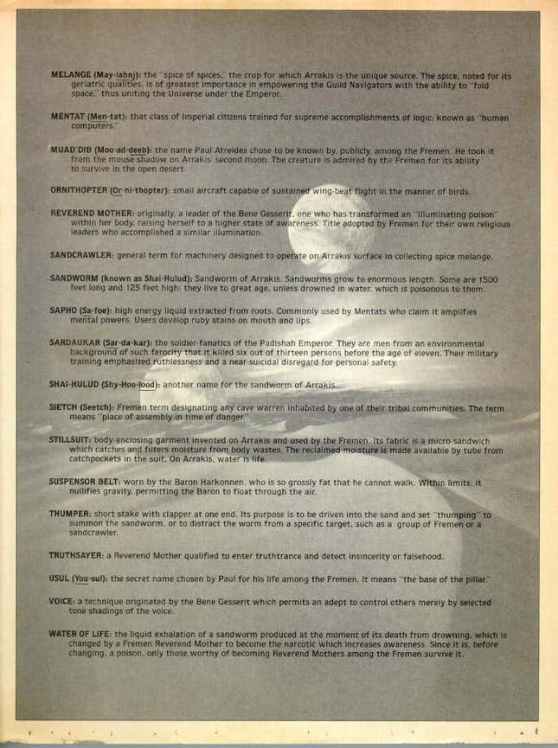 For years, this movie lived in development hell. First, there was an attempt by Apjac International — — headed by Arthur P. Jacobs, the producer of the Planet of the Apes films — to make an adaption with David Lean. One assumes that he was picked because he’d already made Lawrence of Arabia. Anne of the Thousand Days and Condorman director Charles Jarrott was also asked, but Jacobs died in 1973 and the rights went to a French consortium.

That’s when Alejandro Jodorowsky started his quixotic quest to make this movie, as told in Jodorowsky’s Dune. If only that movie had come to the screen — planned to star Brontis Jodorowsky as Paul Atreides, Salvador Dalí as Shaddam IV, Orson Welles as Baron Vladimir Harkonnen, Gloria Swanson as Reverend Mother Gaius Helen Mohiam, David Carradine as Duke Leto Atreides, Hervé Villechaize as Gurney Halleck, Udo Kier as Piter De Vries and Mick Jagger as Feyd-Rautha with music by Pink Floyd and Magma. As the storyboards, designs and script neared completion, the money stopped coming in. All we have to see for the effort are the designs by Chris Foss, Jean ” Moebius” Giraud and H.R. Giger, but man — what could have been*.

Dino De Laurentiis acquired the rights from the consortium and hired Herbert to write a new script and Ridley Scott to direct, but a combination of the pain of Scott’s brother Frank dying and the sheer level of work that would be needed to make the film caused Scott to leave the project.

By 1981,  De Laurentiis renegotiated the rights from Herbert. After his daughter Raffaella saw The Elephant Man, she told her father that David Lynch was the man to make the film, despite the fact that he never read the book, didn’t know the story and didn’t like science fiction. He agreed to make the film, turning down the opportunity to direct Return of the Jedi.

Lynch worked on seven different scripts for the film and his initial cut was four hours long. Universal expected a two-hour movie and that led the filmmakers to cut numerous parts of the film, film new ones and add the opening voiceover that attempts to explain the story. There’s another version that tries to explain even more — the extended cut — that Lynch took his name off of and replaced with Alan Smithee**. As the director would later say — he rarely will discuss the film, won’t be part of a director’s cut and considers it the only failure of his career –“I started selling out on Dune. Looking back, it’s no one’s fault but my own. I probably shouldn’t have done that picture, but I saw tons and tons of possibilities for things I loved, and this was the structure to do them in. There was so much room to create a world. But I got strong indications from Raffaella and Dino De Laurentiis of what kind of film they expected, and I knew I didn’t have final cut.”

As for Jodorowsky, he was upset that Lynch had the opportunity to make this film yet he believed that he was the only other director capable of making the movie. He refused to see the film until his sons made him go and he ended up being overjoyed, seeing that it was a failure. He said that he knew that the fault was not Lynch’s but the money men.

Herbert would say in his short story collected Eye, “I enjoyed the film even as a cut and I told it as I saw it: What reached the screen is a visual feast that begins as Dune begins and you hear my dialogue all through it.”

As for the critics, they hated it. Harlan Ellison claimed that this was because they were denied early access to the film. Luckily, over the years, people have come around to seeing this as a flawed piece of art.

Dune is a movie that simple to explain — a young nobleman named Paul Atreides becomes the leader of a band of rebels on a desert planet — and difficult at the same time to really go into, because the original book is 412 pages of Herbert being inspired by psilocybin and cultivating mushrooms.

I’ve always just tried to go along for the ride and enjoy the astounding visuals and the cast in this. I mean, José Ferrer, Freddie Jones, Sting, Brad Dourif, Kyle MacLachlan, Jack Nance, Patrick Stewart, Jürgen Prochnow, Paul Smith, Dean Stockwell, Max von Sydow and Sean Young all in one movie***? And sandworms? And energy shields that look like Atari graphics?

Also, to this day, I remain stunned that they made coloring books and action figures for this movie. 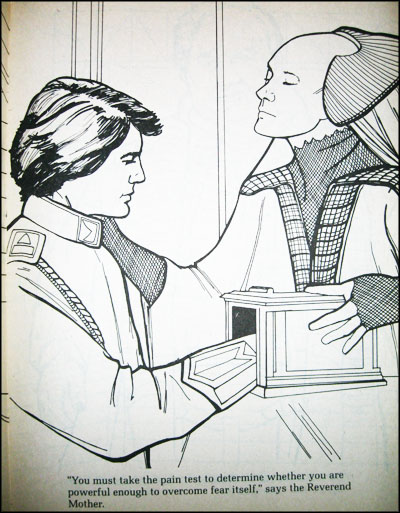 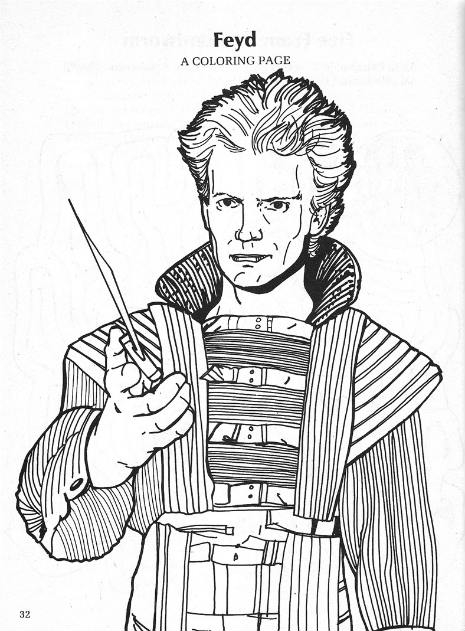 Dune is available in limited edition UHD, blu ray and steelbook editions. Each has the new 4K restoration from the original camera negative, while the UHD and blu ray editions come with a sixty page book featuring new writing on the film by Andrew Nette, Christian McCrea and Charlie Brigden. If you’re into extras, all of these releases are beyond stuffed with them, such as commentary tracks by film historian Paul M. Sammon and Mike White of The Projection Booth podcast; the documentary Impressions of Dune; multiple featurettes on the making of the movie; eleven deleted scenes; the 1983 featurette Destination Dune, originally produced to promote the film at conventions and publicity events; features on the film’s toys and music — with Toto interviews!; and even more interviews with people like Paul Smith, make-up artist Giannetto de Rossi, production coordinator Golda Offenheim and make-up effects artist Christopher Tucker.

If you have any interest in Dune at all, trust me, you need to have this release. Plus, as one of the first UHDs I’ve added to my movie collection, it just looks incredible.

*To be fair, it would have been a 14-hour movie that was only inspired by the book. Herbert said that the script was “the size of a phone book.”

**The name he chose for the screenwriting credit was Judas Booth, which is a play on two traitors and how he felt about the producers of Dune.

***Aldo Ray was originally cast in the role of Gurney Halleck but his alcoholism was out of control. His wife Johanna ended up casting many of Lynch’s films and their son Eric DaRe was Leo on Twin Peaks.