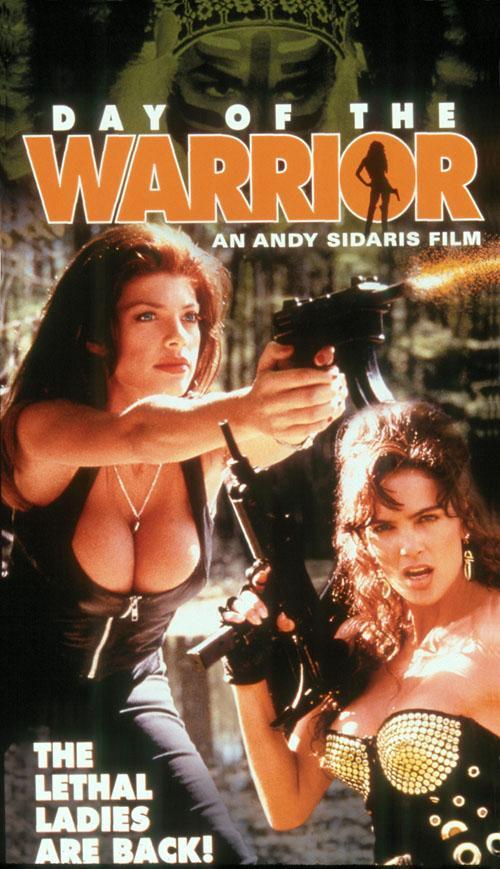 L.E.T.H.A.L. (Legion to Ensure Total Harmony and Law) is back, tracking a Native American pro wrestling criminal mastermind known as The Warrior, who makes his money via diamond smuggling, art theft and making pornography. But once he breaks into the L.E.T.H.A.L. database and steals files on its agents, he goes too far!

You know who else is back? Andy Sidaris, sitting in that director’s chair, making the right decisions. I’m not saying that his son Drew — here executive producer along with Arlene Sidaris — did poorly. But you really want the master at the helm.

Julie Strain finally plays one of the good guys — Willow Black — and she definitely excels at being in charge. She’s joined by Julie K. Smith (Penthouse Pet of the Month, February 1993) as Cobra, who is wearing a mask and working undercover at an adult club. And then there’s Shae Marks (Playboy Playmate of the Month, May 1994) as Tiger.

Former WCW wrestler — and the man whose match with Booker T doomed a WWE-led revival of the brand in one night — Marcus Alexander Bagwell shows up as Warrior, who never leaves his wrestling gym, constantly putting on traditional Native American garb and beating people up.

Rodrigo Obregon is back as Manuel. And now, Gerald Okamura is also on the side of good as the team’s martial artists instructor, Fu. He also likes to dress up and sing as a Chinese Elvis, which both makes perfect sense and none at all. Such is the Sidaris Universe.

This is also the most meta of the series, as the L.E.T.H.A.L. safehouse has posters for Savage Beach, Hard Hunted and Do or Die. And I just adore their headquarters, which looks like a nondescript office building with Southwestern art on the walls and older women just typing away at desks. Is this what happens to field agents when they’re tired of getting into hot tubs and hot water?

You can watch this for free on Tubi or get it as part of Mill Creek’s Girls, Guns and G-Strings box set.